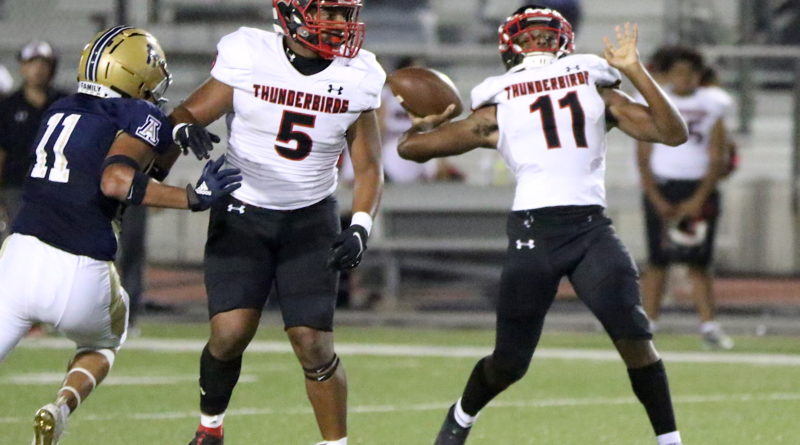 LAREDO, Texas – San Antonio Wagner is known for its ground game that features an array of running backs and the Thunderbirds rolled into the Gateway City hot after racking up 513 yards last week. On Thursday night Wagner unleashed another great rushing performance to soundly beat Laredo Alexander 41-3 at the Student Activity Complex.

Quarterback Isaiah Williams scored three touchdowns on the ground for the Thunderbirds, with two coming in the second quarter to help Wagner take control of the game.

Laredo Alexander took an early 3-0 lead with 11:14 left in the second quarter on a field goal by Mauricio Lopez after their drive stalled deep in the red zone. That proved to be all the offense the Bulldogs would muster the rest of the way.

San Antonio Wagner unleashed Williams, who exploded for a 19-yard run and muscled his way in for a touchdown to get the Thunderbirds rolling. With the extra pointed booted in by Merce Miondani, San Antonio Wagner took a 7-3 lead at the 8:25 mark of the second quarter.

Williams, who only threw one pass last week, was able to connect with Jeremiah Cherry for a 35-yard strike that put the ball on the 2-yard line. On the ensuing play, Williams waltzed in for a 2-yard touchdown run. After Miondani booted in his second extra point at the 3:15 mark, the Thunderbirds took a 14-3 lead into halftime.

In the opening series of the third quarter, running back Joshua Collazo found a gap in the Laredo Alexander defense and ran for a 57-yard touchdown run to give the Thunderbirds a 21-3 lead with 8:47 left on the clock.

San Antonio Wagner’s offense ate the majority of the clock and kept the Laredo offense on the sidelines with a steady stream of big plays. After the Thunderbirds were able to get into the red zone, Williams bullied his way into the end zone for a 3-yard touchdown run to give San Antonio Wagner a 27-3 lead.

Heading into the fourth quarter, it was more San Antonio Wagner. This time it was Quentin Owens who got in the scoring act on a 9-yard touchdown run with 8:19 left in the game.

Owens took a handoff from Williams and rumbled for a 16-yard run to put the ball on the four-yard line. Mar’kel Ford scrambled in for a 4-yard touchdown to give the Thunderbirds a commanding 41-3 lead with 7:25 left in the game.

Laredo Alexander valiantly attempted to put some points on the board late in the game, and even had their biggest run of the night, a 15-yard scramble by Manny Garza. But it was San Antonio Wagner’s night and they held the Bulldogs in check and left town with a 41-3 win.