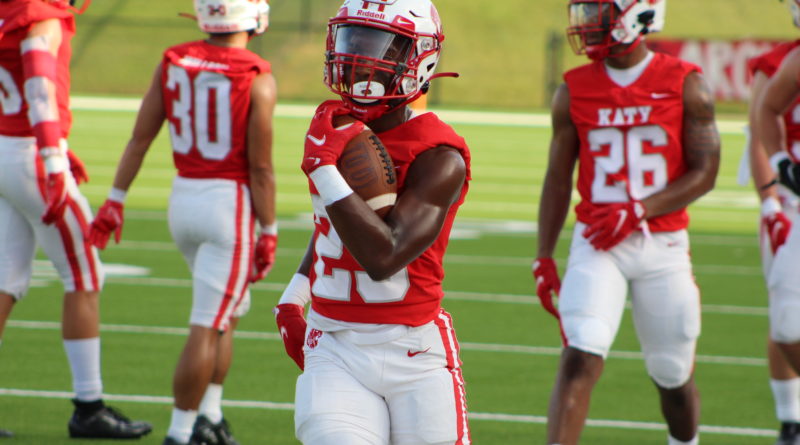 KATY, Texas — Seth Davis and the Katy Tigers trotted back onto the field midway through the first quarter in the midst of a defensive stalemate against Cypress Woods.

Davis took charge and broke the deadlock on the Tigers’ second drive of the game.

Katy’s junior running back took a handoff toward the right side of the offensive line, shook off three Cy Woods defenders, cut back toward the opposite sideline and sprinted to the pylon for a 54-yard touchdown.

Davis’ remarkable run gave the Tigers an early lead that they never relinquished, and Katy — the 7th-ranked team nationally in SBLive’s Power 25 poll and No. 2 squad in SBLive’s Texas Top 50 — ran wild en route to a wire-to-wire 42-7 victory over the Wildcats on Saturday night at Rhodes Stadium.

“At first we started off a little sloppy, but in the second half we came ready. We were all just hitting it and did good,” Davis said. “Coach (Gary Joseph) told us that we were better than this and that we were playing down to their level, so we started playing up to our (potential).”

Davis’ long touchdown run was an omen of what was to come for him and the Tigers.

The junior tallied a game-high 173 yards and three rushing touchdowns on 15 carries. He found the end zone again on Katy’s first possession of the second half by punching in an 8-yard rushing score and accounting for the final 26 yards of the drive on three runs.

Davis punctuated his big night on the ground with an exclamation point on a 3-yard touchdown run to put the Tigers up 28-7 with 4 minutes and 46 seconds left in the third quarter.

Davis’ night concluded at the end of the third quarter, but Katy continued to pick up big chunks of yardage on the ground.

Sophomore running back Chase Johnsey and senior Isaiah Smith each provided major contributions to the Tigers’ rushing attack, particularly in the second half, to help the team eclipse 300 rushing yards on the night and score five rushing touchdowns.

A large factor in the trio’s success out of the backfield was the performance of Katy’s offensive line, which dominated the line of scrimmage after halftime.

“They’re doing good and getting better each week. … They’re improving so much and I love my offensive line. I couldn’t do anything without them,” Davis said. “It’s hard (to defend us). People think our offense is simple, but it’s really not with all of our play fakes and the different ways we can run the ball.”

Cy Woods scored its only points of the game with time dwindling away in the second quarter. Senior quarterback Trey Craft dove into the end zone on a 3-yard QB sneak with 20 seconds to go in the half.

The Wildcats, however, watched momentum swing quickly back in the Tigers’ direction almost as soon as the second half began.

Cy Woods coughed up a fumble near midfield on the first drive of the third quarter, which Davis quickly made the team pay for.

Katy shut down the Wildcats’ offense during the second half and outscored Cy Woods 28-0 after halftime.

“We had to settle down more than anything,” Joseph said. “We had too many kids trying to do too much.”

Sylla spearheaded a relentless Katy pass rush that kept Craft on the run, and Kana delivered as a prolific run stopper.

“We have kind of a find-it, fix-it mentality. We know what we have to do and we can draw up stuff on the whiteboard to make adjustments, and that’s what we did,” Kana said.

“I can imagine it’s tough having people coming from all different angles. We try to mix up who we’ve got coming. That’s our game plan and that’s what we’re going to keep doing because that’s how we apply pressure.”

The Wildcats found their best rhythm when they were able to pass for first downs offensively with Craft consistently connecting with senior receivers Brady Dotson and Connor Morris.

Cy Woods also snagged a pair of interceptions courtesy of defensive backs Josh Jones and Gideon Strickland, but the team was unable to convert either of the takeaways into points.

Katy’s defense has now pitched two consecutive second-half shutouts and allowed 14 points in two games so far this season and will likely only improve.

“I feel like we can be more dominant making plays behind the line of scrimmage,” Kana said. “Moving forward I feel like there’s so much we can accomplish and I feel like that’s where we’re headed.”

Senior defensive back Bobby Taylor did not play in Saturday’s game due to a finger injury and his return will give the Tigers one of the top pass defenders in the state back.

Taylor, a Texas A&M commit, missed the contest along with senior wideout Nic Anderson, an Oregon commit, who was held out by a leg muscle strain.

Katy (2-0) will look to add to its current 10-game winning streak when the Tigers travel to face Dickinson (1-1) at 7 p.m. Friday at Sam Vitanza Stadium. Cy Woods (1-1) will aim to bounce back in its return to action against Alvin Shadow Creek (0-2) at the same time at Cy-Fair FCU Stadium in Cypress.