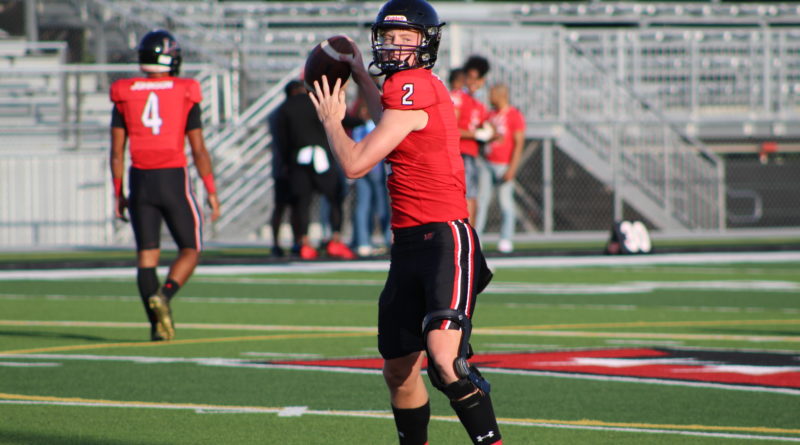 Lake Travis and Judson — the No. 6 and No. 14 teams, respectively, in SBLive’s Texas Top 50 rankings — swapped touchdowns on their opening drives of the night, but the Cavaliers held the ball inside the 5-yard line and a narrow 10-7 advantage after forcing a Rockets’ three and out.

But with their second straight trip into the red zone in jeopardy of stalling again, the Cavs dove toward the end zone on third and goal, but the ball popped loose.

Cavaliers and Rockets players swarmed to the ball, but senior offensive lineman Seth McDaniels fell on the fumble in the end zone for a Lake Travis touchdown.

“I saw a bunch of people on the ball and I saw the ball come out,” McDaniels said. “I knew I had to jump on it. I didn’t realize (I had scored) until I felt all the hands on me. It was awesome.”

McDaniels’ heads-up play gave the Cavs the spark they needed and helped Lake Travis pull away for a dominant 52-20 win over Judson in a matchup that pitted two of the top Class 6A teams in Region IV against one another Friday at Cavalier Stadium.

“(McDaniels) was over in the student section after that I think and he’s supposed to be on the PAT attempt, but that was a great heads-up play by him and great hustle,” Lake Travis head coach Hank Carter said. “It was a turning point in the game where we were able to recover that instead of them getting it, and it’s always good for a lineman to get a score.

“Judson is a great program and they’ve got a great team. … I’m very proud of our kids and this is a great win for our program.”

The Cavaliers’ offensive line knew it had to win the battle in the trenches and seized the victory with its play up front.

Lake Travis dominated the line of scrimmage despite a ferocious Judson pass rush.

The Cavs were able to gain a greater and greater push off the line as the game progressed, which opened up the rushing attack for sophomore back Nico Hamilton.

The Rockets stopped Lake Travis in the red zone midway through the first quarter and forced their opponent to settle for a field goal. The Cavaliers’ offensive line, however, didn’t allow it to happen again and helped its team find the end zone in each of its next three trips into the red zone.

McDaniels and his fellow starters on the Lake Travis O-line denied Judson’s defense multiple goal line stands and controlled the interior to help the Cavs convert on several third and fourth-and-short situations.

“I think it was about everyone playing together. The defense played good, special teams played amazing and it was a special one,” Lake Travis junior quarterback Bo Edmundson said.

“We knew who we were going up against. They’ve got a good defensive end over there and a good D-line. We’ve played two really good D-lines so far and (my O-line) has protected pretty well so far. I’m still in one piece, which is always good.”

Converse Judson was dealt a tough blow early in the first quarter when starting quarterback Michael Burroughs was roughed up in the middle of a dog pile.

Judson was forced to rotate signal callers in and out of the game from that point forward, which made it difficult for the team to establish an effective downfield passing attack as the game progressed.

But despite that adversity, two Rockets made a number of high-impact plays to keep the squad’s offense moving: senior running back Marvin Beasley and junior receiver Anthony Evans.

Beasley was the only Rocket to gain consistent yardage up the middle running between the tackles and was able to keep the chains moving when he was able to bounce to the outside and find running room.

Evans, meanwhile, provided the most spectacular play of the game on special teams.

The junior picked up a loose ball after being kicked around by players on both teams following a muffed punt. Evans, who holds offers from nearly a dozen FBS programs, scooped it up and rumbled untouched down the sideline for a 70-yard punt return touchdown.

He also provided significant help for Judson in the receiving game, and proved to be a dangerous weapon after connecting with Burroughs on several quick, short passing routes.

No one had a bigger night Friday than Lake Travis senior Isaac Norris.

Norris — who took direct snaps under center as well as line up as a back, receiver, tight end and return man — proved to be an invaluable red-zone weapon for the Cavaliers offensively and a dynamic special teams playmaker.

The senior tallied four of the Cavs’ seven touchdowns on the night.

He scored twice on the ground, running into the end zone from inside the 5-yard line after taking direct snaps during the first and third quarters. Norris added a four-yard touchdown reception from junior quarterback Bo Edmundson after the second half began and capped his night off with a kickoff return touchdown, Lake Travis’ final score of the night.

Even with a deep roster, though, Norris should continue to be the focal point of the Cavaliers’ high-scoring offense moving forward. He threw for a 41-yard touchdown and caught a team-high seven passes for 83 yards and a receiving touchdown in Lake Travis’ 40-28 win in Week 1 over Arlington Martin.

His combination of size, explosiveness, hands and blocking ability will make him one of the state’s most versatile offensive playmakers and a cornerstone of the Cavs’ high-powered attack.

ROCKETS’ FRONT SEVEN WILL REBOUND IN A BIG WAY

Converse Judson’s front seven defensively kept the team within striking distance during the first half with a few linemen and linebackers emerging as elite-level defenders.

Junior middle linebacker Matthew Williams and senior defensive end Calen Carter each played a part in several defensive stands for Judson and were able to effectively clog running lanes between the tackles all night.

No defender stood out more for the Rockets, however, than junior defensive end Johnny Bowens.

Bowens, Carter and Williams were also able to disrupt Edmundson’s progressions in the pocket, which prevented the Cavs from connecting on more deep throws and paved the way for senior defensive back Alan Caracheo to snag an interception during the second half amidst the team’s comeback effort.

“Our size, footwork and conditioning (really helped us up front),” McDaniels said. “We really pride ourselves on our conditioning so we can stay going at them while they’re getting tired.”

The Cavaliers scored 40+ points for the second consecutive contest Friday, but Lake Travis’ victory was unquestionably secured by the team’s play defensively and on special teams.

The Cavs forced several fumbles and recovered many of them on defense to prevent Judson’s offense from establishing a rhythm or enough consistency to keep pace on the scoreboard.

The Rockets fumbled six times, which sunk the team’s chances of launching a viable comeback bid and in many cases either took points off the board for Judson or led directly to more points for the Cavaliers.

Lake Travis recovered a muffed punt return deep in Rockets’ territory, which led to a Cavaliers’ touchdown drive, and a botched snap on a punt gave the Cavs’ excellent field position and ultimately a field goal.

Senior safety Derrick Johnson added to the Cavs’ cause in the turnover department too by jumping a route to pluck an interception and take it back 20 yards to the house for a defensive touchdown 38 seconds into the second half.

Lake Travis also ensured itself excellent field position for most of the game thanks to the team’s work in the return game.

The Cavaliers used a 64-yard kickoff return on the first play of the game to jumpstart their first scoring drive and scored their last touchdown of the night on Norris’ kick return score during the second half.

“Playing at that speed in that scheme — Coach (Rodney) Williams does a great job offensively — makes us have to really be prepared,” Carter said. “Special teams were rough last week and much better this week. But if we want to win a championship, we need to be great in all three phases. We’re a ways from that, but we took a step forward.”

The Cavaliers (2-0) will try to keep their hot start going when they hit the road in Week 3 to take on the Rockwall Yellowjackets (2-0) at 7:30 p.m. Friday at Wilkerson-Sanders Memorial Stadium in Rockwall.

The Rockets (1-1) will look to get back in the win column when they return to action to face the A&M Consolidated Tigers (2-0) at 7 p.m. Friday at Tiger Stadium in College Station.