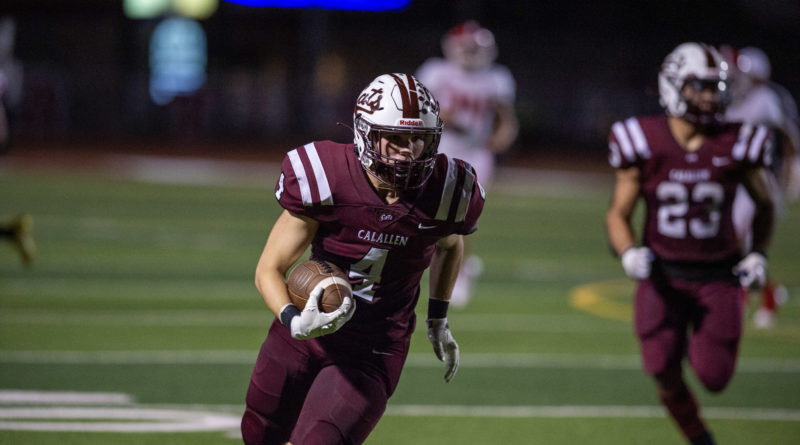 CORPUS CHRISTI, Texas – Epi Hinojosa rushed for three touchdowns as Calallen racked up more than 500 yards of offense in a 55-20 win over Jourdanton on Friday night.

Calallen sticks to the run

Calallen literally hit the ground running against Jourdanton. The Wildcats opened the scoring with Hinojosa punching it in from five yards following a 52-yard carry on his first touch of the game.

The Wildcats quickly scored again, this time with Luke Medina on a 3-yard run to take an early two-touchdown lead. Hinojosa would go on to score two more touchdowns on the ground, and quarterback Terik Hickmon added a one-yard TD run on a QB sneak.

The Wildcats’ offense accumulated 382 rushing yards on 36 attempts and racked up a total of 522 yards for the game.

The Indians kept it close in the first quarter as quarterback Matt Hicks connected with wide receiver Luke Tapp for an eight-yard touchdown to cut Calallen’s lead to 14-7. Hicks suffered a significant injury later in the game and did not return.

Backup quarterback Clyde Schuchart provided a spark for the Indians, finding running back Juan Lerma for a 10-yard touchdown pass to bring Jourdanton within a touchdown. But the Indians were unable to move the ball the rest of the game, finishing just shy of 200 yards of total offense against a fast Wildcats’ defense.

Calallen has depth on offense

The Wildcats have a bevy of offensive weapons as five different players scored in the game, with Hinojosa and Skylar Rubio each scoring multiple touchdowns.

Discipline issues could come back to haunt Wildcats

The Wildcats, while aggressive, gave away 95 yards of penalties Friday night and, combined with last week’s result, they have 170 yards of penalties in two games. If this doesn’t improve it may be something to keep an eye on in the later part of the season.

After once again gaining over 500 yards of total offense (522), Calallen will look to keep this streak going next week against non-district opponent Los Fresnos.

The Wildcats will have two more non district games before opening district play on Oct. 8 against Tuloso Midway.