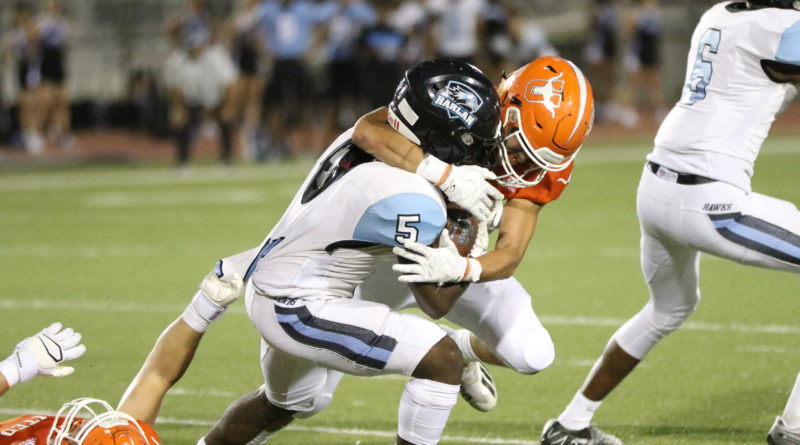 The Longhorns (0-2) had to overcome a slow first half, as their offense stalled and had a difficult time finding their rhythm under new quarterback Armoni Saenz who took over after senior Sammy Casso suffered a season-ending injury in their opener.

United’s defense came up big, though, making a goal-line stand on Harlan’s opening drive and forcing a turnover on downs at the three-yard line.

United squandered the opportunity as they fumbled the ball right back to Harlan. Xavier Watson recovered the fumble to give the Hawks great field position. Three plays later Jacob Gonzalez glided in for a 4-yard touchdown run to give Harlan a 7-0 lead with 6:18 left in the first quarter.

Saenz eventually settled into his element behind his offensive line and started to connect with his two primary targets – sophomore Christian Saldana and senior Luz Leal III. Saenz was able to find Leal for a 40-yard strike to put United in scoring position late in the first quarter. The Longhorns had to settle for a field goal by Alexis Lopez to make it a 7-3 game with 3:36 remaining in the opening quarter.

That proved to be all the scoring United did in the first half as the Harlan defense shut down United the rest of the way.

Gonzalez broke free for Harlan again in the second quarter, racing down the left side of the field for a 75-yard touchdown run to give Harlan a 14-3 lead that they would take into halftime.

United regrouped and came back in the second half looking much sharper on offense. The Saenz to Saldana and Saenz to Leal connections were in full force in the third quarter. Saenz found Saldana for a 30-yard pass to put the ball on the five-yard line. Two plays later running back Frank Soto bounced in for a five-yard run to cut Harlan’s lead to 14-9.

It did not take long for Harlan to get those points back as Gonzalez would go on to score his third touchdown of the night on another 75-yard run at the 9:38 mark to make it a 21-9 in favor of the Hawks.

On the next series, Saenz again found his favorite target as he connected on a 45-yard touchdown pass to Saldana to cut Harlan’s led to 21-15 with 8:35 left in the third period. After the United defense held their ground on the next series, Saenz went to his two best targets, Leal and Saldana. He found Leal on a 25-yard pass to get the Longhorns into the red zone. On the ensuing play United would go on to tie the game with Saenz finding Saldana on a 20-yard pass to make it 21-21.

The lead quickly evaporated as Harlan’s Chris Jackson scrambled in for a 15-yard run as the Hawks took the lead 28-27 to end the third quarter.

Harlan built a 31-27 lead on a field goal by De Los Santos with 5:34 left in the game. On the next series United marched the ball down into the red zone and with 1:40 left in the game faced a fourth-and-11 play. A pass interference penalty was called on Harlan, breathing new life into United as the ball was placed on the five-yard line. Steve Loring later scored on a 1-yard touchdown run to give United a 33-31 lead with 1:27 left in the game.

The Hawks then mounted their game-winning drive, eventually getting to the 15-yard line to set up De Los Santos’ game-winning field goal.