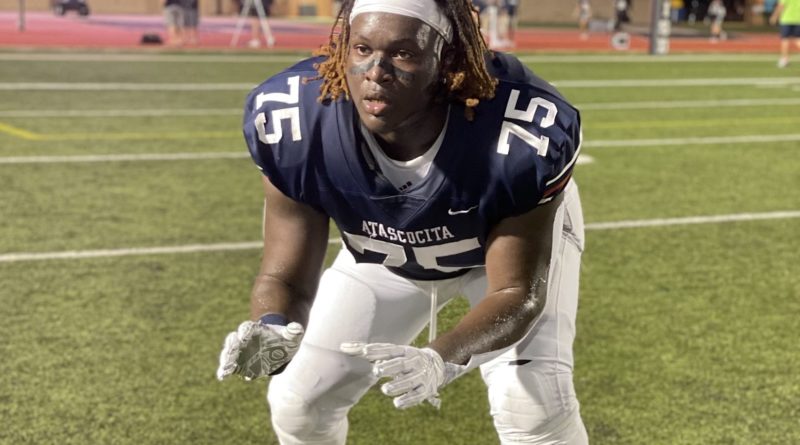 Humble Atascocita’s Kam Dewberry entered the 2021 Texas high school football season as one of the top Class of 2022 offensive line recruits across the country and quickly proved why.

The senior started at left tackle in Atascocita’s season opener and helped the Eagles’ offensive line dominate in the trenches during a dominant season-opening win over Klein Collins.

Dewberry, a fourth-year starter, is rated a four-star prospect and the highest-rated uncommitted Class of 2022 offensive line recruit in Texas remaining according to 247 Sports.

After the Eagles’ 48-7 win over Collins in their home opener, Dewberry told SBLive Texas which schools stood out to him most during the summer recruiting cycle.

Dewberry added that he hasn’t placed a timeline on announcing his commitment. He and the Atascocita Eagles (1-0) will return to action when they face the Allen Eagles (1-0) at 7 p.m. Friday in Allen.

Bledsoe — a 6-foot-4, 270-pound defensive lineman — visited Texas for the first time in late June and Texas A&M in July before announcing his decision. Marlin’s senior star is regarded as one of the best edge rushers throughout Texas in the Class of 2022 and one of the top defenders in Class 2A.

Bledsoe tallied 104 tackles, 17 tackles for loss, four forced fumbles and two sacks defensively and tacked on 1,259 yards on158 carries as his team’s primary running back as a junior in 2019 at 2A DII Bremond.

James racked up eight receptions for 113 yards and two touchdowns through the air in Del Valle’s narrow season-opening 40-35 loss to Austin McNeil.

The Class of 2023 standout wideout also managed to pick up a trio of DI offers just days after his team’s season opener. James received offers from North Texas and a pair of SEC schools — Mississippi State and Ole Miss — by Wednesday evening.

That gives James three dozen DI offers at the outset of his junior season with a big year statistically likely on the horizon. James and the Cardinals (0-1) will return to action when they visit Liberty Hill (0-1) at 7:30 p.m. Friday.

El Campo running back Rueben Owens earned an official offer from Michigan State on Wednesday, just days after the junior back ran wild in the team’s season opener.

He tallied 174 rushing yards and 4 touchdowns in the Ricebirds’ 56-34 win over Gonzales in their first game of the season.

Owens is rated a five-star recruit, the top running back and fifth overall Class of 2023 prospect throughout the state of Texas according to 247 Sports. He now holds offers from nearly three dozen FBS programs.

He should be primed for a big junior campaign with Ricebirds in 4A DI and will be one of the top Class of 2023 offensive targets in Texas.

Denton Guyer safety Ryan Yaites made waves on the recruiting trail by picking up a pair of offers from SEC programs after the opening week of the Texas high school football season.

Yaites earned an offer Friday from the Auburn Tigers a day after he helped lead Guyer to a dominant 46-17 win over Carrollton Hebron in Week 1. He followed that up with an offer from the Missouri Tigers on Wednesday, doubling his offers from SEC schools within the first week of his junior season.

Yaites was previously offered by LSU in mid-May and Ole Miss in mid-March, but has been recruited by many of the top college football programs across the country. He was also recently invited on a recruiting visit to Kansas State’s Sept. 4 game against Stanford at AT&T Stadium in Arlington.

Yaites is rated as one of the state’s top Class of 2023 defensive back recruits and starts on a Guyer defense alongside several other FBS prospects. He and the Wildcats (1-0) will have a tall task in Week 2 defensively when they face crosstown rival Denton Ryan (1-0) at 7 p.m. Friday.