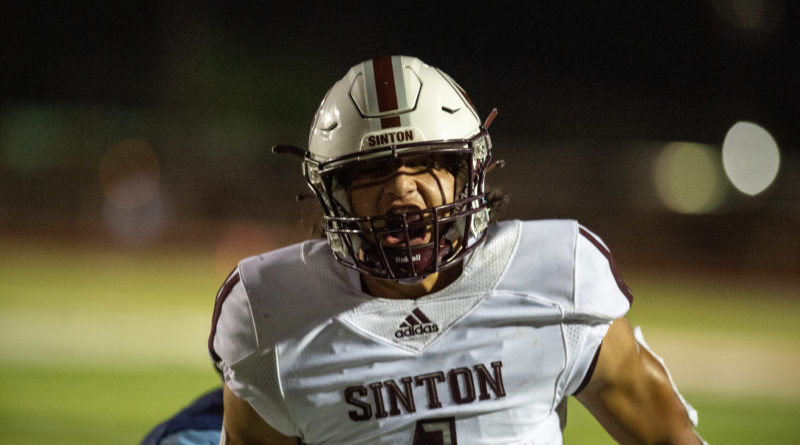 CORPUS CHRISTI, Texas — Sinton quarterback Rene Galvan rushed for three touchdowns and passed for two more to lead the Pirates to an impressive 50-12 road win over Carroll on Thursday night.

Sinton’s offense dominant from the start

Sinton’s offense came out of the gates ready to attack. Galvan was calm leading his team in the shotgun, and running back Jerek Sanchez was explosive as well opening the scoring with a seven-yard TD run in the first quarter.

Sinton scored again on a 17-yard TD pass from Galvan to wide receiver JR Cruz, then closed out the first quarter with a 16-0 lead after a bad snap on a punt almost gifted them a touchdown but was recovered by the Tigers for a safety.

Galvan fumbled twice in the red zone on long runs, otherwise Sinton’s lead would have been much bigger at halftime. After tacking on another safety, the Pirates led 18-0 at half.

Jaedin Howard got the Pirates rolling in the second half, taking the opening kickoff 100 yards to the house for a 25-0 lead. Galvan later added his first rushing touchdown of the night on a five-yard scamper to extend the lead to 31-0.

A Galvan fumble led to Carroll’s first points of the game as the Tigers marched down the field and scored on a 19-yard pass from quarterback Benny Hernandez to wide receiver Benjamin Sandoval.

Galvan bounced right back, though, calling his own number with a 38-yard TD run to take a 38-6 lead.

Late in the third quarter the Tigers changed quarterbacks with Matthew Rodriguez coming in and finding instant success, hitting Kyle Callejo-Soto for an eight-yard touchdown pass.

Galvan tacked on two more TDs for the Pirates in the fourth quarter as he connected with wide receiver God Pyeatt for a 30-yard touchdown, then later capped off a 67-yard drive with a four-yard run that accounted for the final margin of 50-12.

Galvan put to bed any doubts that he is just deadly with his legs. He flexed his strong left arm for two touchdowns and kept Carroll’s defense guessing with his ability to throw the football.

Turnovers cause concern on offense

The Pirates turned the ball over four times on offense with Galvan fumbling three times and wide receiver Braeden Brown coughing up another one. Three of the four fumbles were in the red zone and took what looked like guaranteed points off the board.

The Tigers came out strong on their first drive, moving the ball effectively on the ground before being forced to punt. The real killer for the Tigers was their inability to snap the ball consistently on punts. Two bad snaps directly gave points to the Pirates with both resulting in safeties. The offense found a rhythm late in the game with passing plays splitting the Pirates’ safeties and resulting in two touchdowns.

Both quarterbacks – Hernandez and Rodriguez – tried to connect with wide receiver Datron Denmon, with varying degrees of success. Denmon did have one big play called back because of a flag.

With the Pirates outscoring their opponents 107-24 through two games, they are clearly imposing their will early on. They are minimizing mistakes and capitalizing on their opponents’ errors. The Pirates will look to continue their early dominance on Sept. 10 against Miller high school at home in Sinton.