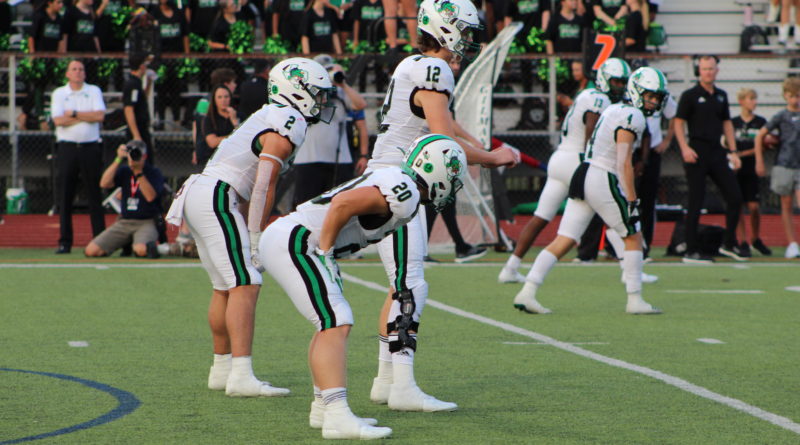 ROCKWALL, Texas — Southlake Carroll quarterback Kaden Anderson and running back Owen Allen were seemingly involved in every one of the Dragons’ big second-half plays.

Southlake’s two juniors provided the spark to put their squad squarely back in the game and back up their team’s No. 9 national ranking in SBLive’s Power 25, but watched the final play of the night nervously from the sideline.

Carroll’s defense earned a crucial stop to force a fourth down and long for Rockwall Heath with enough time for one more play. The Hawks lined up for a chip-shot field goal attempt for the win, but the No. 3 Dragons (2-0) got their fingertips to it and blocked the would-be-game-winning kick to survive and hold on for a 36-35 comeback road victory against No. 12 Heath (1-1) in a matchup between two SBLive Texas Top 50 ranked teams on Thursday at Wilkerson-Sanders Memorial Stadium.

“You know starting off the way that we did, that’s not how we play football. We knew that,” Allen said. “I think we were down 21-3 at one point, and I think this says a lot about our team and how special we are to be able to keep our composure through all that adversity, reset at halftime like we did and come out looking like a different football team.”

“We’ve been here before,” Anderson said. “We had been blocking field goals all night, so I knew we had that. I knew we won the game right when they brought that field goal unit out.”

Anderson was presented with an unprecedented situation at the start of fall camp when Quinn Ewers, the team’s returning quarterback and the nation’s top-rated Class of 2022 recruit, opted to attend Ohio State a semester early and forgo his senior season.

That left a large pair of shoes for Anderson to fill this fall, but the junior appeared to be slipping into his predecessor’s shoes seamlessly during his Week 2 performance against Heath.

The Dragons’ signal caller showed exceptional composure and kept a level head while leading his team back into the game after heading to halftime with a 21-10 deficit. He helped the team tally 19 unanswered points to give Southlake its first lead late in the fourth.

“Coach (Riley) Dodge at halftime was like, ‘Boys, we’re going to win this game.’ I believed him and I know he believed in me. We came out in that second half and absolutely crushed it” Anderson said. “Owen is my best friend and I have a great connection with these receivers. The chemistry is there. I missed a few balls tonight, but we’ll get better as the season goes on.”

Anderson connected with senior wideout Landon Sampson, a South Carolina football commit, on a huge 70-yard touchdown pass on third and long for Carroll’s first touchdown of the night. He was terrific in crucial third and fourth-down situations, routinely finding Allen, Sampson and tight end RJ Maryland — a Boston College commit — to extend drives and chip away at Heath’s lead.

Anderson delivered his biggest throw of the night midway through the fourth quarter when he hit Allen on a slip screen for a 56-yard gain on fourth down and 12 deep to flip the field and help the Dragons score to take the lead for the first time with 3 minutes and 20 seconds to play.

OFFENSE WILL CARRY THE HAWKS FAR AGAIN IN 2021

Rockwall Heath built its identity upon a dangerous, high-octane offense during an 11-3 season in 2020 that included a run to the Region II-6A DII finals. The Hawks are going to rely on their talented offense to stay in tight games again in 2021 with one of the most balanced attacks in Class 6A.

Senior quarterback Josh Hoover was sharp for Heath behind center from the opening snap Thursday night.

The Indiana football commit picked up where he left off after a strong Week 1 performance by leading Heath to touchdowns on its first three drives of the night.

Hoover connected with senior receiver Jordan Nabors, a Baylor football commit, in stride for a 35-yard touchdown pass to give the Hawks’ a two-possession lead midway through the first quarter. Senior running back Zach Evans, a Minnesota football commit, punched in Heath’s third score on a 12-yard run up the middle to extend Heath’s lead to 21-3 to start the second quarter.

What stood out more than the DI talent in Heath’s offensive huddle, though, was the balance the Hawks were able to find between the run and the pass. Hoover’s pinpoint precision through the air got the Hawks out in front early, but Evans’ work on the ground kept Rockwall Heath ahead deep into the fourth quarter.

The Hawks, however, struggled when it counted on special teams and defense.

Heath missed two crucial field goals after multiple long drives were halted inside the red zone, and the team’s defense was unable to stop the Dragons on numerous long third and fourth-down conversion attempts.

Carroll shut out the Hawks defensively during the second half after Heath added a touchdown on its first drive of the third quarter.

That set the stage for Southlake to score 26 of the game’s next 33 points. Carroll’s comeback chances started to improve after the defense stopped Heath inside the red zone and forced the Hawks to settle for a field-goal attempt, which was missed to set up a long Dragons’ touchdown drive.

After another score trimmed Heath’s second-half lead to 35-24, Southlake Carroll pinned the Hawks deep within their own territory to flip field position and forced a quick three-and-out, which translated to another quick touchdown to cut the deficit to 38-35 after a failed two-point conversion.

The Dragons’ defense saved the game in the waning seconds too, stopping Heath three times after being backed inside their own 15-yard line before blocking the potential game-winning field goal with no time left on the clock. Southlake held Heath to three field-goal attempts inside the red zone, all of which were missed.

Rockwall Heath’s senior receiver combo of Nabors and Jay Fair should be considered the state’s most premier deep-ball duo.

Nabors and Fair, an Auburn football commit, give the Hawks two elite pass-catching options out wide who make the team’s offense a legitimate threat to score from anywhere on the field, especially with another DI talent in Hoover slinging them passes deep downfield.

On top of snagging a long touchdown reception, Nabors hauled in a 51-yard pass during the first half that set up another Heath score. Fair added a late score for the Hawks after beating a Southlake safety in man coverage to catch a 34-yard touchdown pass on a crossing pattern.

Fair and Nabors’ combined speed and athleticism made Heath’s pass attack difficult to defend against in man coverage by routinely beating opposing defensive backs in one-on-one deep passing routes. When the duo lined up next to each other in shotgun formations, it opened up the weak side of the field for quick passing routes and Evans in the rushing game.

SOUTHLAKE’S ALLEN IS MOST UNDERRATED BACK IN 6A

The biggest takeaway from Southlake Carroll’s dramatic second-half comeback was Allen’s versatility as both a pass catcher and the team’s primary ball carrier.

Allen was nothing short of spectacular for the Dragons on Thursday and came through in the clutch whenever his number was called.

The junior back tallied more than 100 rushing yards and 100 receiving yards while adding two touchdowns on the ground.

Allen scored the final two touchdowns of the game for Carroll, including the eventual game-winning score, to slam the door shut on Rockwall Heath and put the finishing touches on Southlake’s comeback.

He scored for the first time on a three-yard scamper up the middle with seconds to go in the third quarter one play after he hauled in a 63-yard screen pass on third down and long. Allen struck again in the fourth quarter when he connected with Anderson for a 56-yard catch and run on a screen pass to convert on a fourth down and 12 and keep Carroll’s chances at a comeback alive.

Allen scored on another three-yard run shortly thereafter with 3:20 to go in the contest after Heath was flagged for defensive pass interference on fourth and goal. He credited his offensive line for powering his big night out of the backfield.

“We needed those big chunks of yardage. When they figured out we were hurting the defense, I think we took advantage of that,” Allen said. “When we have such athletic O-linemen that can run those screen plays with me and run 60 yards downfield, that’s pretty special. … That O-line, I can’t think of a time they let Kaden (Anderson) be touched, and that’s a good football team we were playing with good linebackers and pass rushers. I think our O-line did a a great job of holding them off and keeping Kaden comfortable back there.”

No. 3 Southlake Carroll improves to 2-0 with the victory and will look to keep rolling when the Dragons travel to face Prosper (1-0) at 7 p.m. Friday, Sept. 10 at Children’s Health Stadium in Prosper. No. 12 Rockwall Heath falls to 1-1 with the loss and will look to bounce back against Red Oak (0-1) at the same time at Billy Goodloe Stadium in Red Oak.

The Hawks were originally supposed to play Garland Naaman Forest (1-0) in Week 3, but picked up a replacement contest against Red Oak after the Naaman Forest game was canceled due to health and safety concerns earlier in the week.