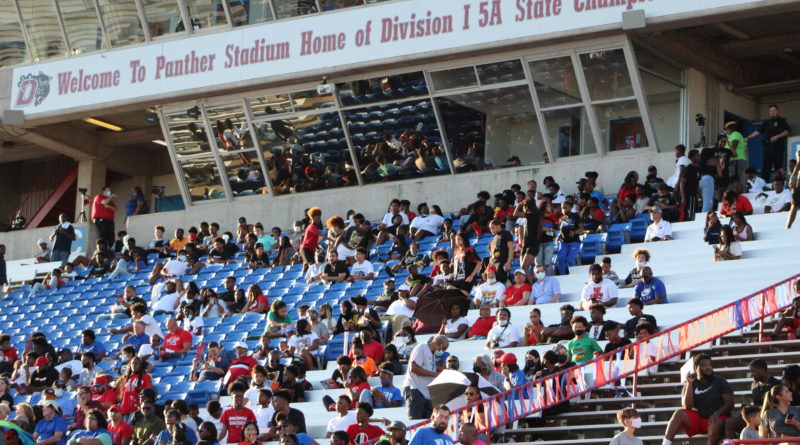 Only days after the 2021 high school football season kicked off in Texas, Duncanville has canceled its scheduled Week 3 showdown against Ohio’s Bishop Sycamore.

Duncanville — which was scheduled to host Bishop Sycamore on Friday, Sept. 10 — announced via a new release that it was canceling its game against the school citing “unanswered questions about the Ohio school’s operating procedures and the eligibility of their student athletes.”

“Student safety is our top priority and I can’t ask our student athletes to take the field next week without knowing more about who they will be facing,” Duncanville ISD Athletic Director Dwight Weaver said in a written statement. “Our school district’s core values speak to honesty, integrity, ethics and providing a safe environment for students. This situation calls into question many of those values, so we are cancelling this game.”

MORE: ONE TEAM THAT DIDN’T BUY WHAT BISHOP SYCAMORE WAS SELLING

Representatives from Duncanville’s athletic department said they were “unable to reach a representative from the school” when they tried contacting Sycamore, and indicated the Panthers will search for a replacement Week 3 opponent.

Multiple media outlets reported Sycamore lied to ESPN about the talent on its roster in order to organize a nationally-televised Week 1 game against Florida’s IMG Academy on Sunday. Sycamore lost that game 58-0.

“Bishop Sycamore told us they had a number of Division I prospects on their roster, and to be frank, a lot of that, we could not verify,” said ESPN’s Anish Shroff, who was providing commentary during the broadcast. “They did not show up in our database, they did not show up in the databases of other recruiting services. So, OK, that’s what you’re telling us, fine, that’s how we take it in. From what we’ve seen so far, this is not a fair fight, and there’s got to be a point where you’re worried about health and safety.”

Sycamore boasts zero ranked Class of 2022 recruits according to national recruiting databases 247 Sports, ESPN and Rivals, and that’s not all. Sycamore’s roster also includes several players that appear to have already exhausted their eligibility and graduated high school in other states.

But additional reporting calls the legitimacy of the school into question entirely. The school’s website has subsequently been taken down.

The team also reportedly played and lost a Friday game to Pennsylvania’s Sto-Rox 17-9 according to TribLive, a mere two days before Sycamore’s nationally-televised tilt with IMG. Sycamore’s MaxPreps page, however, does not list that game but does mention a 38-0 Thursday loss to Akron’s Archbishop Hoban. According to University Interscholastic League rules, which Duncanville and other Texas high school football teams must abide, schools are prohibited from playing two games within five days of each other.

Furthermore, the Massillon Independent reported that Bishop Sycamore, an online charter school, is not registered with the Ohio High School Athletic Association and is instead listed as a member of the Texas Christian Athletic League along with Mississippi’s Ocean Springs Grace Baptist.

“Like many Ohioans, I am concerned by the recent reports and questions raised about Bishop Sycamore. While this weekend’s football game brought concerns about the health and safety of players, it also raised red flags about the school’s operations,” DeWine said in a written statement.

“Schools like Bishop Sycamore have an obligation under Ohio law to meet certain minimum standards. Whether Bishop Sycamore meets these standards is not clear. … I have asked (the Ohio Department of Education) to conduct an investigation into Bishop Sycamore to ensure compliance with Ohio law and to ensure the school is providing the educational opportunities Ohio students deserve.”