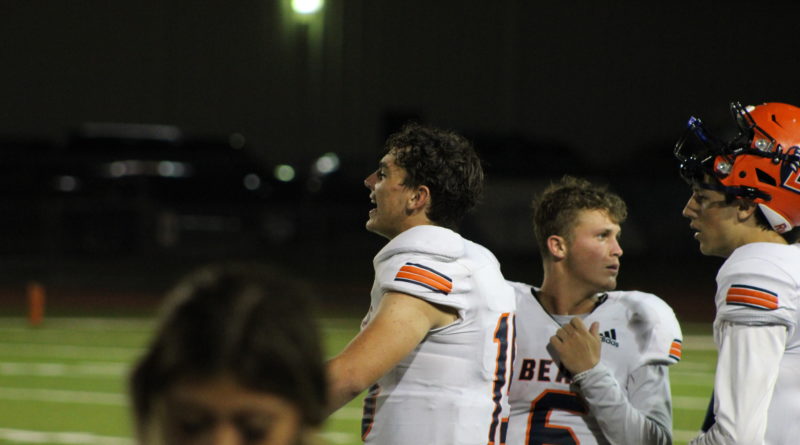 KLEIN, Texas — Conner Weigman and Cypress Bridgeland didn’t need long to put points on the board in their season debut Saturday night against the Klein Cain Hurricanes.

He led his team on a four-play, 69-second march downfield that ended with him scrambling up the middle, swerving away from a diving defender and extending the ball toward the goal line for a 35-yard touchdown run.

That drive set the tone for Weigman and the Bears, who scored touchdowns on eight consecutive drives to begin the game and buried Cain 54-14 in a nationally-televised, dominant season opener at Klein Memorial Stadium.

“I feel like we just stuck to the game plan and did what we were supposed to do. I put my trust in my lineman, running backs and receivers, and we got the job down,” Weigman said. “We were just taking what the defense gave us and tried not to do too much and stay within the game plan.”

Weigman put his arm strength, accuracy and quickness on display while helping Bridgeland’s offense in every possible way.

The senior exited the game midway through the third quarter after tallying 365 yards and five touchdowns on 21-of-28 passing,

Weigman added 120 rushing yards and two touchdowns on the ground, but the highlight of the night, however, was his 48-yard touchdown reception.

He threw a sideways pass to receiver Jonathan Nelson, who tossed it back to Weigman as the Bears’ signal caller outraced the Hurricanes’ defense to the end zone.

“It felt cool,” Weigman said. “I’ve never done that at the high-school level, so it was a pretty cool experience.”

Birdgeland’s offense was virtually unstoppable through the early stages of the third quarter, which helped the team build up a sizable early advantage over Cain, which faced a 47-14 deficit at halftime.

Weigman credited both the connection with his wide receivers and the performance of his offensive line for allowing the Bears’ offense to do almost anything it wanted.

He connected with Nelson and tight end Reid Mikeska for a touchdown each before hitting wideout Andrew Maleski for three touchdowns highlighted by a 70-yard bomb over the top of the defense to start the third quarter.

Weigman showed particular presence throwing the deep ball, connecting with his wide receivers for seven passes of 20 yards or more on eight drives.

“They’re a young group, but they really stepped up tonight,” he said of his receivers. “We’ve been working very hard through all of fall camp, and I feel like it all came to fruition tonight.”

The Hurricanes scored two first-half touchdowns, the first of which came when quarterback Carson Roper completed a 30-yard pass to receiver Jaelan Smith late in the first quarter

Roper helped Cain find the end zone again shortly before halftime when he connected with wideout Matthew Golden on a 17-yard touchdown throw to cut Bridgeland’s lead to 34-14.

Klein Cain struggled to find its footing defensively until the game was almost out of hand with the secondary unable to slow down the Bears’ pass attack and the front struggling to put pressure on Weigman.

Golden, a TCU commit, and Smith proved to be versatile playmakers for the Hurricanes during the first half, but Klein Cain’s balance and consistency offensively vanished when Roper exited with an undisclosed injury midway through the contest.

Smith took over at quarterback, but the Bears’ relentless front seven was too much to handle.

Bridgeland’s defensive front played excellent third-down defense to keep Cain’s offense off the field and forced a critical interception that set up Weigman’s touchdown reception seconds before the halftime buzzer.

Linebacker Benjamin Birbeck and defensive end Charles McKnight led the way for the Bears’ ferocious pass rush that racked up several sacks and helped secure a second-half shutout in an all-around dominant performance for Bridgeland.

“We’ve set the bar high, but I feel like we’ve still got to keep plugging away,” Weigman said. “It’s still early in the season and we’ve obviously still got a lot of work to do, but it’s a good start.”

Bridgeland (1-0) will look to add to that good start when it returns to action in its home opener against Alvin Shadow Creek (0-1) at 6 p.m. Saturday at Cy-Fair FCU Stadium in Cypress. Klein Cain (0-1) will look for a bounceback performance when it travels to face Cypress Creek (0-1) at 6:30 p.m. Thursday at Ken Pridgeon Stadium in Houston.