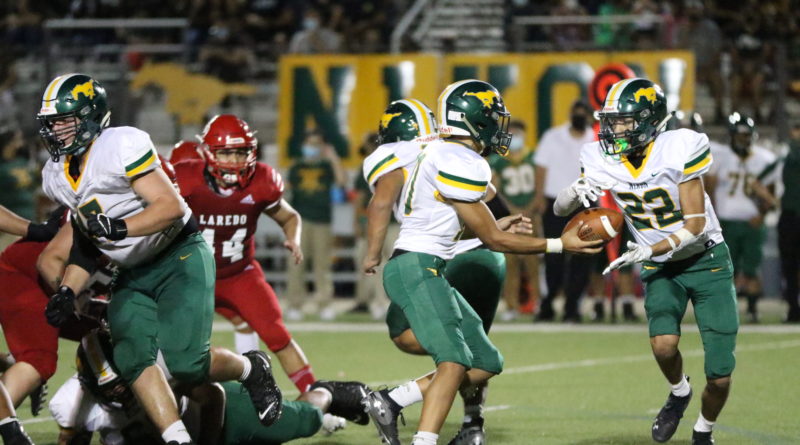 LAREDO, Texas – The 54th edition of the Martin-Nixon football game was back in Laredo after a year of hiatus due to the COVID-19 pandemic as teams opted to play a district only schedule during the 2020 season. A sea of red and green filled each side of historic Shirley Field as Laredo came out to see the oldest rivalry that featured two teams that were glad to be back on the field.

Nixon established an early ground game that never wavered throughout four quarters, and helped the Mustangs take down rival Martin 28-13 in the 2021 season opener for both teams. The Mustangs picked up their sixth consecutive victory over Martin and get to keep the Dr. Marcus A. Nelson Hammer Bowl at Nixon.

The running back trio of Andres Bautista, Erik Ruiz and Hernando Ruiz racked up plenty of yards to put Nixon ahead from the opening quarter. But it was the Nixon defense who came in fired up and made plenty of key plays to cause havoc for the Martin offense who had a hard time establishing any rhythm through four quarters.

In the opening play of the game, Nixon forced a fumble on a hard hit to Martin quarterback Gerardo Cham. The Mustangs pounced on the loose ball and three plays later Bautista scored on a 9-yard run at the 10:54 mark for a 7-0 lead.

Nixon kept utilizing a misdirection offense that opened the lanes for the trio of work horses that made huge gains on the ground. After Bautista put Nixon ahead in the opening quarter, it was Hernando Ruiz who became a threat on offense. Ruiz took a handoff from quarterback Ivan Diaz and raced down the field for a 64-yard run to put the Mustangs in great field position to close out the first quarter.

With great ball position inside the red zone, Nixon quarterback Ivan Diaz scored on 1-yard run to make it a 14-0 ballgame at the 11:56 mark in the second quarter.

Martin kept going after Nixon even when their offense stalled, and it was the defense that got things rolling. The Tigers forced a fumble inside the red zone and Martin’s Chris Dillard recovered it with 8:17 left in the first half – but they were not able to convert.

Nixon took advantage of Martin’s missed opportunity as Erik Ruiz unleashed some strong running for a 19-yard touchdown run to make it 21-0 with 1:39 left in the first half.

The Tigers utilized halftime to get back into the game as the defense once again ignited the offense after forcing a fumble as they wrapped up Diaz in the back field. Linebacker Omar Barrera scooped up the loose ball and ran for a 23-yard touchdown to open the second half and post Martin’s first score of the game as Nixon held a 21-7 lead with 10:57 left in the third quarter.

It did not take long for Nixon to get that score back as the Mustangs responded with five-yard run by Jose De Leon after marching down the field on a long drive that ate up plenty of clock. Nixon was meticulous with each play and took their time to keep the offense on the field.

Martin’s second score came courtesy of Cham’s ability to elude defenders after breaking through the line of scrimmage and racing down the field for a 75-yard run at the 6:23 mark. That proved to be the final score of the game as Nixon posted the 28-13 rivalry win.