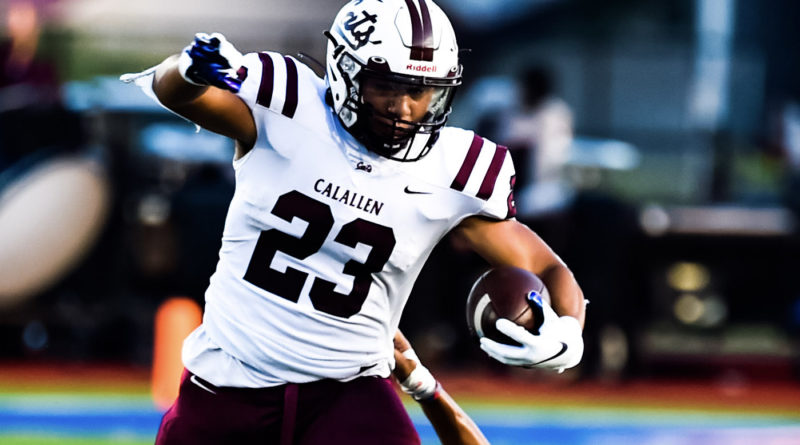 GETTING ON THE ATTACK EARLY

Calallen received the ball to start the game and used its offense to lead the charge. On the very first drive Calallen would march the length of the field with a strong and speedy running game. With their plethora of running backs – Hinojosa, Sonny Carpinello, Luke Media – and quarterback Terik Hickmon, the Wildcats would use speed and sweeps to control the tempo of the game.

New Gregory Portland head coach Brent Davis looked to install a new spread offense for the Wildcats. G-P used a mixed attack with running back Dalvin Batts carrying the ball on the ground and quarterback Brandon Redden running as well as passing the ball.

The Portland defense stood its ground well only giving up the early touchdown in the first quarter. Portland would use the pass to set up their first touchdown of the game with Redden finding Ross Dubose for 19 yards that would set up three straight runs from Batts that culminated in a three-yard touchdown run.

The Wildcats made good use of their time on the ball gaining 246 yards on 54 plays with an even mixture of yards coming on the ground.

TURNOVERS WERE A FACTOR

Turnovers played a large part in the game with a fumble on the opening kickoff that, after a large pile, was recovered by Calallen. Calallen returner Carpinello was having trouble holding on to the ball both in the backfield and on kick returns. Calallen would have two turnovers for the game with Hickmon throwing an interception near the end of the first half and a fumble again committed by Hickmon to start the second quarter. Portland would have one turnover for the game with Redden throwing an interception with three minutes to go in the first half.

Some rust is expected at the start of every season, and it showed on Friday. Calallen committed eight penalties for a total of 75 yards, while Portland had just three penalties for a total of 10 yards. Calallen had a touchdown for Hinojosa taken off the board after he taunted an opponent on a 90-yard run. The wildcats would punch it in on the next play with Skylar Rubio running 17 yards for the score.

With the return of starting quarterback Hickmon, Calallen will look to defend their district title and make another deep playoff run. The Wildcats have a strong offense with a mix of speed and size on their offensive line that will give teams trouble helping their favored running attack. Their defense was strong Friday night, only allowing 246 total yards for the game with one interception and a strong showing against the run.

Calallen will head back home victorious after a strong showing looking to prepare for a matchup in non-district play against Jourdanton on September 3. Gregory Portland will look to capitalize on their strong points from a tough game against a tough opponent and look forward to a road trip to Los Fresnos and wanting to put one in the win column.