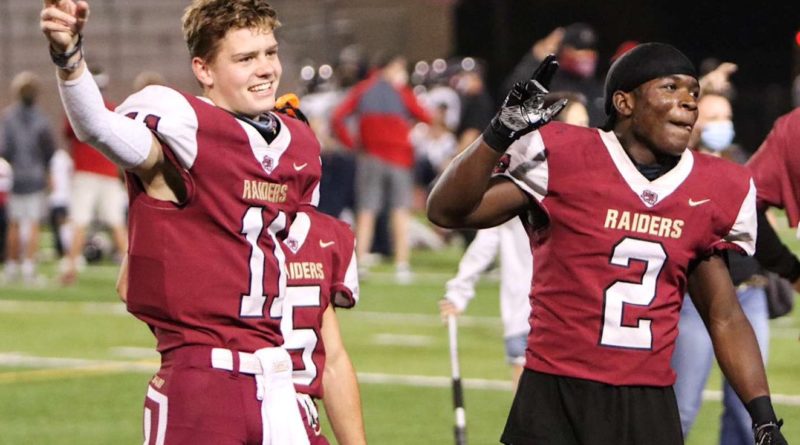 In anticipation of the start of the 2021 Texas high school football season, SBLive is breaking down the top teams and players in every classification level around the state before the season kicks off.

We began our 2021 football season previews by analyzing the top Class 6A and Class 5A Division I teams throughout Region IV. Now we’ll look at the top contenders and highlight players to watch among 5A DII teams in Region IV in addition to analyzing the playoff field and predicting the regional final matchup.

Leander Rouse emerged as one of the region and state’s biggest surprise stories in 2020 after the Raiders finished 10-2 and advanced to the regional semifinals after a 1-9 campaign in 2019. Rouse went undefeated against district competition last year and enters this new season as the early favorite to capture the 13-5A DII title again. The Raiders will be headlined offensively by second-year starting quarterback Mason Shorb, who earned an all-state honorable mention selection from the Texas Sports Writers Association after throwing for 3,100 yards and 39 touchdowns as a sophomore. Shorb is among a group of seven returning offensive starters for Rouse that also includes running back Eric Moore, who rushed for 1,190 yards and 12 touchdowns in 2020, and a pair of prolific wide receivers in Troy Oliver (1,002 receiving yards, 12 TDs) and Jalen Beccera (921 yards, 13 TDs).

“Oh man, last year was amazing and it really showed us all what we’re capable of and how dangerous we are as a competitor,” Shorb said. “Going into this year is going to be a bit tougher due to the fact that we are a top-level team in the area and we have that target on our backs everywhere we go. We are coming in with a chip on our shoulder reminding us constantly that we don’t want to fall short of that state championship again this year.”

Brenham and Georgetown East View should challenge Rouse for the district crown after each dropped one-score games to the Raiders in district play last year. East View battled into the regional semifinals during a 7-5 campaign in 2020. Senior quarterback Peyton Adams will be a major aerial threat after passing for 2,562 yards and 29 touchdowns directing an offense that averaged 41.6 points per contest last season. Adams will have speedy wideouts Michael Sedwick (729 receiving yards, 11 TDs) and Tyreeq-Styles Obichere (456 yards, four TDs) to throw to, while the Patriots return nine defensive starters too. Brenham also brings back nine starters defensively to a unit that should be one of Region IV’s most elite. Two-way standout Eric Hemphill will anchor the team’s lockdown secondary, while five returning starters will hold down the front seven. Brenham’s offense should take a step forward under the leadership of second-year starter Stephen Stackhouse too. Elgin and Leander Glenn will be the top contenders for the fourth playoff seed. Glenn’s edge in experience defensively should pay dividends during district play.

Liberty Hill starts the season off as the prohibitive favorite in 14-5A DII after a remarkable run to the Region IV title and an appearance in the state semifinals. The Panthers graduated several key contributors from their 12-1 squad last year, but are poised to be an elite defensive team. Liberty Hill’s defense will be led by TSWA second team all-state selection Andon Thomas, who racked up 161 tackles, five sacks and three interceptions at linebacker last season. Thomas will play alongside linebacker Aaron Brewer (105 tackles, six sacks) and  defensive lineman Lloyd Johnson Jr. (70 tackles) to give the Panthers a strong presence upfront defensively, while Kaden McMahan (80 tackles, three interceptions) and Carter Hudson (six interceptions) hold down the secondary. Noah Long will emerge as a leader in Liberty Hill’s slot-T offense as the only returning offensive starter after running for 412 yards and six touchdowns last season.

“Our biggest strengths are our leadership and our brotherhood,” McMahan said. “I definitely feel like those (playoff) games will benefit the team this year a lot because most of the guys this year saw how much we cared and saw how tough we really are. At Liberty Hill, it’s like a tradition of how tough we are because our offseason is known to be one of the best and it shows every year.”

Marble Falls was the only 14-5A DII team to score against Liberty Hill last season and should represent the Panthers’ toughest competition within the district. The Mustangs advanced to the area round of the playoffs for the first time in a decade during a 7-3 campaign last year and bring back eight starters to their slot-T offense including running backs Robert Adame (785 rushing yards, seven TDs) and Caleb Vidal. Austin McCallum should be the top contender among the district’s five Austin ISD programs with a district-leading 31 lettermen and 15 starters returning. Third-year starter Jaxon Rosales should thrive at quarterback for the Knights behind an experienced offensive line with several weapons in the backfield and out wide. Austin Crockett, Northeast and Travis will fight for the district’s final postseason berth. Travis forfeited its final two games of the season due to COVID-19, but should be a playoff contender again this year with six starters back on each side of the ball. Crockett and Northeast will get a boost from returning quarterbacks, although Crocket senior signal caller Michael Newton (1,102 passing yards, 11 TDs) should be able to help push the Cougars into the playoffs with a veteran offensive line helping pave the way.

Boerne Champion will look to improve upon a second-place finish in 15-5A DII last season with one of the most balanced offenses throughout Region IV. The Chargers welcome back dual-threat quarterback Karson Kaiser (1,616 passing yards, 16 TDs; 267 rushing yards, four TDs) and running back Alex Rodriguez (1,048 rushing yards, 12 TDs) to lead an offense with seven returning starters. Kaiser should elevate his game to the next level with wideouts Ryan Brandon (542 receiving yards, five TDs) and Davis Pike (343 yards, six TDs) back too. The Chargers defense will also feature five returning starters from a unit that surrendered 14.0 points per game last season.

San Antonio Alamo Heights will battle Boerne Champion for the district title as the reigning district champs. Alamo Heights clinched an area-round playoff appearance to cap off a 7-3 campaign in 2020 and the team brings back 33 lettermen, the most of any 15-5A DII team. The Mules will boast an experienced secondary and a well-balanced offense led by quarterback James Sobey (844 passing yards, five TDs; 497 rushing yards), receiver Rett Anderson (505 receiving yards, five TDs) and running back George Flesher (692 rushing yards, four TDs). The top offensive weapon throughout the district, however, is Floresville senior running back Dareion Murphy. The Tigers’ versatile playmaker tallied 1,600 yards and 23 touchdowns on the ground last season and verbally committed to Vanderbilt earlier in the summer.

“I’d say for sure our biggest strength is knowing each other’s weaknesses and building them. We have spent a lot of time not only doing football, but building the relationship as a team for the season,” Murphy said. “We continue to find ways to improve and make the little details sharp.”

Murphy’s game-changing speed and athleticism should help Floresville punch a ticket to the postseason while Kerrville Tivy and Medina Valley vy for the remaining playoff spot. Tivy should have an explosive offense with quarterback Jaken Layton (1,100 passing yards; 460 rushing yards) and running back Fisher Middleton (850 rushing yards, six TDs), but the Antlers will have little experience defensively. Medina Valley returns six starters on each side of the ball and if the team’s offense can improve, a strong defensive group led by linebackers Seth Bullard and Alex Luna — who combined for 141 tackles — that gives the Panthers an edge up front and should push them into the playoffs.

Mercedes and Mission Veterans are poised to be the top contenders for a district championship in 16-5A DII and might have the two highest playoff ceilings of any Rio Grande Valley teams this season. Mercedes should be considered the early-season favorite after advancing to the area round of the playoffs last year. The Tigers welcome back senior quarterback Mike Cisneros, a third-year starter who racked up 1,402 yards and 15 touchdowns through the air and 514 yards and three touchdowns on the ground, to lead an experienced offense loaded with weapons. Last season’s leading rusher, Miguel Jimenez (539 yards, nine TDs), and versatile playmaker Tyrell Trevino (391 receiving yards, five TDs; 239 rushing yards, three TDs) will also be back in the Tigers’ spread offense. Linebackers Roan Galvan (91 tackles, 16 TFL, five sacks, three FR, FF), Jayden Gonzalez (67 tackles, two INTs, sack) and JJ Alvarado (82 tackles, five TFL, two sacks, INT) headline a lockdown Mercedes defense.

Mission Vets should take a big step forward after missing out on the postseason last year. Senior quarterback Ricky Reyna returns as a second-year starter after throwing for 1,786 yards and 19 touchdowns as a junior. The Patriots’ greatest strength will be defensively, however, where junior linebacker Luis De Hoyos will lead a group featuring nine returning starters. De Hoyos earned TSWA honorable mention all-state honors last year after tallying 99 tackles, four forced fumbles and a pair of sacks and should make Mission Veterans one of the Valley’s elite defensive teams.

“Having a more balanced offense and defense (this year) is going to hopefully allow both sides of the ball to get enough rest between series,” De Hoyos said. “(That way) we are constantly going onto the field fresh and ready to go all game.”

Edcouch-Elsa, PSJA Southwest, Sharyland High and Sharyland Pioneer will be the leading candidates to clinch the district’s third and fourth playoff seeds. Pioneer should return to the postseason after making a run to the regional finals last year, but the Diamondbacks return just four starters. Junior Joseph Graham Jr. emerged as one of the top receivers in South Texas last season with 1,075 yards and 13 touchdown receptions through the air and will be the focal point of the D’backs’ offense this fall. Edcouch-Elsa should eke out the final postseason berth with an elite defense and an efficient rushing attack in its slot-T offensive system. The Yellow Jackets owned the district’s top defense last year after allowing 259.7 yards per game and also welcome three returning starters back to their offensive line after running for 439.9 yards per contest in 2020.