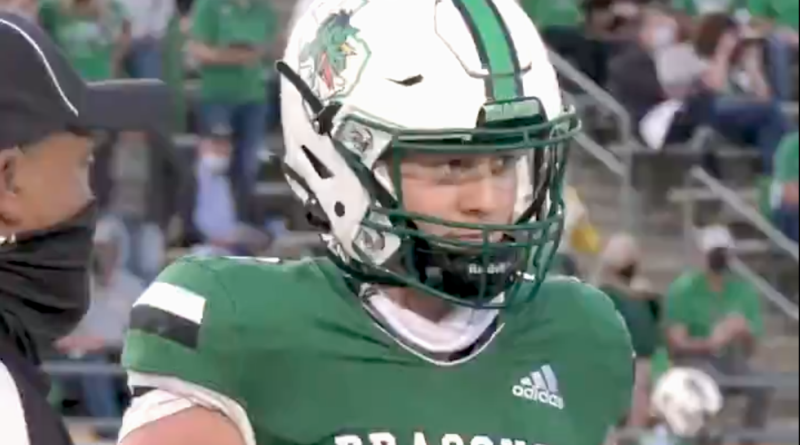 Yahoo Sports reported last week that Southlake’s signal caller was contemplating the possibility of joining the Buckeyes ahead of schedule.

Ewers, a consensus five-star recruit and the top-ranked Class of 2022 prospect nationally, announced his decision to head to Ohio State this fall citing his inability to profit off his name, image or likeness while still competing at the high-school level in Texas.

“Over the past few weeks, following Texas’ UIL informing me I would be prohibited from profiting off my own name, image and likeness, I’ve taken time to think about what lies ahead of me, both in the short- and long-term,” Ewers wrote in a Twitter statement.

“This is not just a financial decision; this is about what is best for my football career. At 18, with one final class about to be completed to earn my high-school degree, I feel it’s time to get a jump on my college career that is available to me. I am eager to start learning from Coach (Ryan) Day and the rest of the coaching staff.”

Ewers represents the first high-profile case of a high school athlete looking to cash in on name, image and likeness sponsorship opportunities. The University Interscholastic League, the governing body of most Texas high school athletics, prohibits student-athletes from receiving payments while actively participating in UIL-sanctioned events.

“We recognize the in-depth research by the University Interscholastic League on Texas’ NIL Legislation on determining what is allowed by law for Texas high school athletes. After gathering and analyzing all information, Quinn decided what he felt is best for his future is to forgo his senior year,” wrote Southlake Carroll head football coach and athletic coordinator Riley Dodge in a Twitter statement.

“He is an incredible young man who exemplifies what it means to be a Dragon- inspiring excellence in his teammates and modeling what excellence looks like in the classroom and on the field.”

Ewers, who committed to the Buckeyes in November, will be set to enroll at Ohio State as a freshman in early August before fall classes begin. He’ll be able to compete in fall camp in Columbus too.

He’ll also be one of several players in the mix as the Buckeyes look for their new starter at quarterback this fall after Justin Fields was picked by the Chicago Bears with the 11th overall pick in the 2021 NFL Draft.

McCord, Miller and Stroud were considered the top candidates for the job prior to Ewers’ early arrival.

His departure also leaves a big hole behind center for the Dragons, who return one of the top Class 6A teams throughout the state in 2021.

Ewers started 22 games at quarterback during his sophomore and junior seasons at Southlake Carroll, leading the team to a 19-3 overall record and trips to the regional finals and state championship game in the 6A Division I playoffs in 2019 and 2020, respectively.

He threw for 6,445 yards, 73 touchdowns and eight interceptions on 70.0% passing while adding 723 rushing yards and 12 ground scores during his high school career.

Junior Kaden Anderson will step in as Ewers’ likely replacement for this upcoming season after throwing for 169 yards, three touchdowns and an interception on 14-of-19 passing during appearances in four games last season.

Anderson should have plenty of help too. Southlake Carroll returns 14 starters, five offensively, from last year’s squad that made it to the 6A DI state championship.

Southlake Carroll will kick off its 2021 regular season against Dallas Highland Park at 7 p.m. Thursday, Aug. 26 at AT&T Stadium in Arlington.