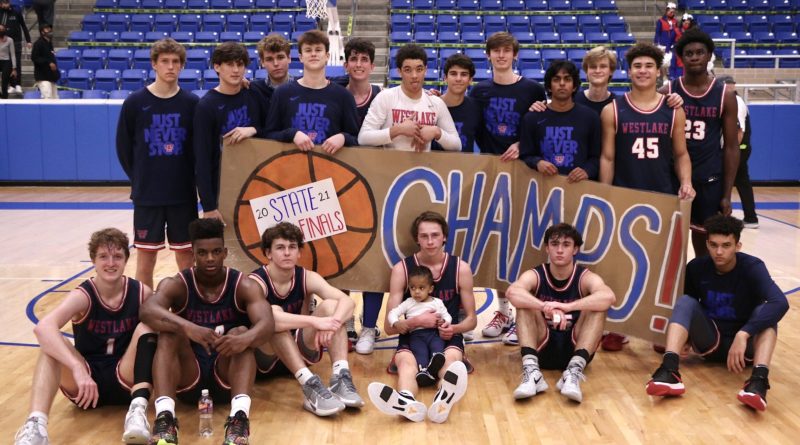 The 2021 Texas (UIL) high school boys basketball state finals tip off Friday and continue through Saturday night. All six state championship games will be played at the Alamodome in San Antonio.

Here’s a look at the top boys players to watch across all six state championship games.

An imposing interior presence on both ends of the court, Adams scored 21 points in Westlake’s 57-44 6A semifinal victory over Atascocita. The 6-foot-7 Kansas signee is a four-star recruit and rated the nation’s No. 71 overall prospect in the 247Sports composite rankings.

The 6-foot-6 Atwood scored a game-high 16 points as Argyle held on for a 43-39 4A semifinal victory over Oak Cliff Faith Family. Argyle hasn’t lost since Nov. 23.

Blackmore had 18 points in the 3A semifinals for Cole, which is trying to win its first state title since the Shaquille O’Neal-led 1989 team. The 6-foot-2 Blackmore holds offers from Oral Roberts and Rio Grande.

Boyd played standout defense and also scored 28 points in Tatum’s 3A semifinal win over Brock Eagles. The 6-foot-3 junior is a three-star football prospect with offers from Kansas and New Mexico.

The 6-foot-6 Clark brings physicality and tenacity to Westlake’s frontline. In the state semifinals, Clark notched a double-double with 11 points and 13 rebounds.

A three-star recruit for the class of 2022, Ford is averaging 7.9 points, four assists and one steal per game. The 5-foot-11 point guard holds offers from Denver and Texas-Arlington.

Standing 6-foot-6, Gibson brings size and shooting to the guard position for Kimball. Gibson, who holds offers from Wichita State and Texas-Arlington, knocked down three third-quarter three-pointers in the 5A semifinals.

Harvey eclipsed the 2,000-point mark for his Hargrave career earlier this season and is averaging 24.1 points, four rebounds and 2.8 assists per game. The 5-foot-11 Trinity University signee has 4A Hargrave in the title game for the first time in school history.

Harwell drained four three-pointers and scored 22 points in a recent 1A playoff victory over Garford. The 6-foot-1 Harwell then helped lead the Greyhounds to a semifinal win over Rocksprings.

Henderson paced Kimball with 17 points in the state semifinals. The 6-foot-7 big man is a three-star football recruit with offers from Baylor, Georgia Tech and Kansas.

A five-star recruit and Texas’ top-rated player for the class of 2023, Holland is No. 13 overall in the 247Sports composite rankings. The 6-foot-8 star scored 20 points in Duncanville’s 6A semifinal victory over Richardson and already holds offers from Memphis, SMU and Texas A&M. He is averaging 13.8 points and 10.1 rebounds.

One of the state’s top juniors, Morris is a four-star recruit and the No. 66 overall national prospect in the 247Sports composite rankings. The 6-foot-3 guard holds numerous major offers and recently decommitted from Memphis.

Mowat is a three-year starter who holds the Westlake school record for wins by a player. The 6-foot senior netted 13 points in the semifinals for the Chaparrals, who are trying to become the first Austin-area school to win a top-division state title.

Nichols was a two-way standout in the semifinals, scoring 18 points while shutting down Richardson five-star guard Cason Wallace. The 6-foot-4 Nichols is a three-star recruit who will play college basketball for Sam Houston State. He is averaging 16.7 points, 7.4 rebounds, 3.3 assists and two steals.

Porchia had a big day for Beaumont United in the semifinals, recording 18 points in an 82-57 victory over Leander. The 6-foot-5 Porchia is also a star football player and is averaging 14.1 points, 4.3 rebounds, two assists and three steals.

Overshadowed by some of his Duncanville teammates, Reyna is a talented guard who signed with Alabama State. The 6-foot-3 senior played excellent defense against Richardson’s Rylan Griffen in the semifinals and is averaging 13.4 points, three assists and one steal.

Also a standout football player for 2A Grapeland, the 6-foot Wiley is averaging 16.2 points, 8.8 rebounds, 2.2 assists, 2.2 steals and a block on the basketball court. Grapeland is back in the state finals for the first time since 1985.

Yates III had 11 points in the semifinals for Beaumont United, which advanced to the championship game for the first time in the school’s three-year history. The 6-foot-3 Yates III already holds scholarship offers from Illinois and TCU and is averaging 14.5 points, 3.3 rebounds, 2.4 assists and 3.4 steals.