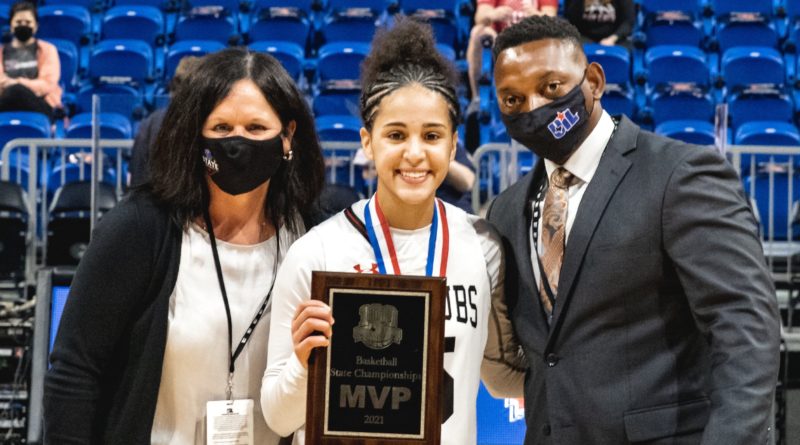 The 2021 Texas (UIL) high school girls basketball state finals tipped off Wednesday and continue through Thursday night. All six state championship games will be played at the Alamodome in San Antonio.

Here’s a look at the top girls players to watch across all six state title games.

A three-time all-state selection, Baccus recorded 13 points in Dodd City’s 1A semifinal romp of Neches. The 5-foot-6 senior is also a standout in volleyball.

Branson came through in a big way for Lipan in the 2A semifinals. The freshman point guard hit a key fourth-quarter three-pointer and finished with a team-high 13 points as Lipan defeated Panhandle 35-30 to advance to the title game.

Brown has been consistent throughout the postseason, averaging 16.5 points over her last four games. The 5-foot-9 senior guard had 17 points, seven rebounds and five assists as DeSoto knocked off South Grand Prairie 63-52 in the 6A semifinals. Brown has signed with Houston.

Callahan knocked down a clutch three-pointer and scored 10 points as Canyon eked out a 42-40 win over Pinkston in the 4A semifinals. The 5-foot-9 guard is a North Texas signee.

Celsur, a 5-foot-7 point guard, poured in a game-high 31 points for Martin’s Mill in the 2A semifinals. Martin’s Mill defeated Snook 42-38 to advance to the finals for the fourth time in five seasons.

Dowell is a strong interior scoring threat for Fairfield, which captured last year’s 4A state title and is now looking to add a 3A trophy. The junior scored 29 points in the 3A semifinals against Bishop.

The 5-foot-8 Fields entered the month of March averaging 17.6 points and five rebounds for Brownfield, which held on to defeat Ponder 51-48 in the 3A semifinals. Brownfield has won its last 21 games entering the finals.

Note: Fields had a huge game in the 3A final on Wednesday afternoon, scoring 22 points and hauling down six rebounds in Brownfield’s 68-64 overtime victory. Fields was named the game’s MVP.

ESPN’s No. 10 recruit nationally for the class of 2021, Harman is an electric playmaker who will continue her basketball career at Texas. The 5-foot-6 point guard scored 14 points in Cypress Creek’s 55-34 6A semifinal victory over Converse Judson.

Hayes got rolling in the second half of Cedar Park’s 5A semifinal game against Beaumont United, scoring 16 of her team-high 22 points in the second half. The 6-foot-2 junior forward helped lead Cedar Park to a 75-51 victory and the program’s first title game appearance.

An imposing 6-foot-4 junior forward, Herron is one of DeSoto’s three interior standouts. Herron has committed to play college basketball for Kentucky and is rated No. 57 nationally by ESPN for the class of 2022.

Hunter scored a team-high 15 points in the semifinals for Cypress Creek. The 5-foot-8 guard is the No. 24 overall recruit in the country according to ESPN. She will remain teammates with Rori Harman in college at Texas.

Rated No. 22 nationally for the class of 2022 by ESPN, Jackson scored 18 points in Hardin-Jefferson’s 4A semifinal victory over Boerne. The 5-foot-10 junior is an athletic guard who can score in the paint and from beyond the arc.

Jackson also had a strong game for Cypress Creek in the 6A semifinals, netting 13 points in the romp. Jackson is the top interior player for a Cypress Creek team that has won all 32 of its games by double figures.

Klemen was the MVP of last year’s 1A state championship game as Nazareth captured its fourth straight title. The program has won a national public-school record 22 state championships entering this week’s final with Dodd City.

Knight recorded a double-double in the 5A semifinals, finishing with 17 points and 10 rebounds against Beaumont United. The 5-foot-10 senior has been a key contributor during Cedar Park’s 24-game winning streak entering the finals.

Maul exploded for 27 points in a playoff victory over Corpus Christi Veterans Memorial and had 13 points and 13 rebounds in the semifinals. Maul is a versatile 5-foot-10 sophomore guard.

ESPN’s No. 49 national recruit for the class of 2022, Muhammad is an athletic 6-foot-4 junior post. The trio of Muhammad, Herron and Sa’Myah Smith are averaging a combined 33 points and 25 rebounds for DeSoto this season.

A three-star recruit, Owens-Barnett was named MVP of the 2020 state final after scoring nine of her 14 points in the fourth quarter. Frisco Liberty defeated San Antonio Veterans Memorial, 35-26, for its first state title, and the 5-foot-7 Owens-Barnett has the Redhawks back in the finals for the third straight year.

The highest-rated prospect of DeSoto’s three junior forwards, Smith is ESPN’s No. 44 national recruit for the class of 2022. The 6-foot-3 Smith missed the second half of last season with a torn ACL but is back at full strength.

Sneed is a 5-foot-7 freshman who put up a team-high 25 points in the 4A semifinals. Sneed’s big day helped propel Hardin-Jefferson to the title game for the second time in three seasons.