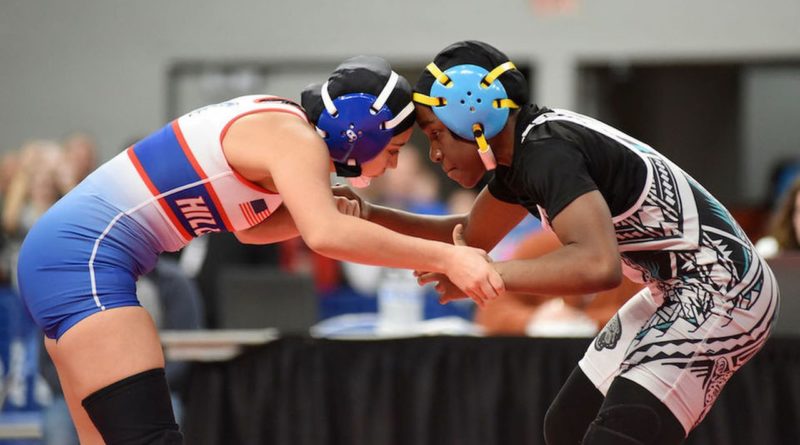 There are hundreds of standout wrestlers in Oregon and these lists are not intended to be comprehensive. Let us know about other girls wrestlers fans should know about this winter.

Rickett was a gymnast growing up before switching to wrestling, and she’s quickly making her mark in her new sport. She took second at 125 pounds at June’s OWA Women’s State Championships in Cottage Grove, then placed third at 126 at the Supreme Summer Nationals in Las Vegas. In the fall, she won the 130 title at the Mike Clock Women’s Open, beating four college wrestlers along the way — perhaps fitting since she’s going to early college to work on her degree while still a junior. “There have been times when Alice is wrestling, and she’ll look over to the corner and tell us she doesn’t know the move we’re talking about mid-match,” said Spartans coach Ralph Medina. “It’s hilarious. She is very athletically gifted and is working hard to improve her technique and fix the little things that can help her be so much better.”

Smith is a two-time placer at the state championships, taking fourth as a sophomore in 2020 and second in June at 110, falling to North Medford’s Estella Gutches in the final to complete an 11-2 season.

McDougal has reached the final in all three of her state appearances — the first two with Elmira before transferring to Central Linn after her sophomore year. She came back after a head injury ended her freshman run to win the title as a sophomore and place second at 170 in June. She is ranked No. 24 in the nation at 152 pounds by USA Wrestling.

Medina is a two-time state champion, winning her first title as a freshman in 2019 and her second in June, pinning Jessy Hart of Sweet Home in 65 seconds in the 130 final after giving up her spot at the Class 5A boys state tournament earned by winning the NWOC district title at 126. She prepped for her senior season by taking second at 131 at the Supreme Summer Nationals and third at the Mike Clock Women’s Open, and she’s ranked No. 7 at 122 in the latest USA Wrestling rankings. “She has a work ethic like no other and is constantly grinding,” said her coach and father, Ralph Medina. “She is fueled by those who say girls shouldn’t wrestle, but there have been times when she’s wrestling and you can see her look over to the corner and crack a smile, just because she is out there wrestling and doing what she loves.”

Amaro transferred from Scappoose, where she placed fourth and second at state in her first two seasons, to Oregon City prior to her junior season. She won a state title for the Pioneers at 140, beating two-time champion Tyler Richardson of Vale in a matchup of nationally ranked wrestlers. Amaro reached the quarterfinals at Fargo Nationals at 132 and finished one win shy of earning All-America honors, then won the 137 title at the Supreme Summer Nationals in Las Vegas and placed second at 136 at the Mike Clock Women’s Open. She is ranked sixth in the nation at 132.

Rodriguez is perhaps the most decorated wrestler (boy or girl) in the state, adding a Fargo Nationals championship at 144 in July to the second state title she earned at 155 in June, the U15 Pan American Games gold medal she won in 2018 and the World School Combat Games gold in 2019. She also won the Supreme Summer Nationals in Las Vegas, defeated Jasmine Robinson of Texas 11-4 at FloWrestling’s Who’s Number One preseason event in Texas, took third at the Texas Women’s Classic, and is the No. 1-ranked wrestler at 144 and No. 14 pound-for-pound in the country, according to USA Wrestling. “Destiny had a fantastic summer and is so talented, it’s going to be very difficult for any girl in Oregon to catch her,” said Lions coach Doug Samarron.

Sullenger entered high school four years ago fresh off an Oregon Middle School state championship, and she’s made two finals during her career — as a freshman, she lost to All-American Emma Truex, and in June, she lost to Newberg’s Sophia Redwine in the 120 final. She was ranked No. 17 at 122 in the preseason by USA Wrestling.

Gutches took home a third-place medal from her first appearance at the state tournament in 2020, then followed in June with her first title, pinning Bend’s Analise Smith in the second round of their 110 final.

Vann followed a similar career path as Gutches, taking third as a freshman at state in 2020 before winning a title in June, erasing an early 6-0 deficit to top seed Tess Barnett of McKay and recording a second-round pin in the 115 final. During the offseason, she won the 116 title at the Supreme Summer Nationals and placed fourth at the Mike Clock Women’s Open. She is ranked No. 12 at 117 in the USA Wrestling rankings. “Haley is the most dedicated wrestler that we have had in our program,” Warriors coach Jeff Zerba said. “I have never seen somebody rise to the position that she is in so fast. She has only been wrestling a little over two years and is nationally ranked. She never stops training and going to high-level tournaments, and she is a great role model to have in the room — not only for the girls, but for all of the wrestlers.”

Hart qualified for state for the first time in June, finishing third in a loaded 190 field that included two-time champion Fiona McConnell of Milwaukie and Pan American Games junior champion Alexys Zepeda of Gervais. Huskies coach Steve Thorpe called Hart “tough as nails, and she has stepped it up as a leader for the women’s team.”

Annis has become the leader of one of the state’s top girls programs, a two-time state finalist who won her first title in June with a 40-second pin of Ashland’s Sienna Caruso to cap a 13-0 season. She is ranked No. 23 in the nation at 106 in USA Wrestling’s latest rankings. “You will not find a harder-working and more dedicated wrestler in our room than Kaylee,” said Colts coach Mike Simons. “She is definitely one of the all-time best girl wrestlers from Thurston, and she is always working to improve and get better.”

The Kerr name and La Pine wrestling go hand-in-hand — brothers David and Derrik were three-time state champions for the Hawks, and father Dave won the school’s first title back in 1989. Kira joins the flock after posting a second-place finish at 145 in June, going 11-2 and falling to North Salem’s Quilaztli Miguel-Lapham in the final.

Smith has placed at state in each of her first two seasons, winning a fourth-place medal as a freshman and reaching the 155 final in June, where she lost to West Linn’s Destiny Rodriguez.

Schiewe has wrestled behind three-time state champion Raina Herzog during her Lions career, advancing to state for the first time as a junior and placing third at 235. Now, she’ll look to put the lessons gained from sparring with Herzog to keep the title in Cottage Grove this winter.

Takahashi moved up from third place as a sophomore to state champion as a junior, winning the 135 title in June by avenging a 2020 semifinal loss to Eagle Point’s Shayla McNulty to dethrone the Eagles senior with a 10-2 major decision.

Chafin is one of the anchors of an improving Huskies girls program, going 20-2 as a junior and making the state podium for the first time in June with a third-place finish at 115. She won last month’s Tulsa Kickoff Classic and has committed to wrestle for Eastern Oregon.

Caruso reached the final at 100 in her first state appearance in June, losing to Thurston’s Kaylee Annis. She was the first Ashland wrestler (boy or girl) to wrestle for a state title since 2014.

Redwine could have been a four-time state champion, but as a sophomore, she eschewed the chance to defend the title she won as a freshman — the first official girls state title at the inaugural tournament in 2019 — to help the Tigers end Roseburg’s six-year reign atop the Class 6A ranks. She returned to the girls state tournament in June and won her second title at 120, beating Hood River Valley’s Emily Sullenger 8-1 in the final. She is ranked No. 18 by USA Wrestling at 122. “Sophia is the ‘Queen of Newberg wrestling,’ no doubt,” said coach Neil Russo.

Richardson won state titles as a freshman and sophomore, then reached the final at 140 in June, where she lost to Oregon City’s Bella Amaro in the final. She won the 143 title at the Supreme Summer Nationals in August and is No. 20 in the USA Wrestling rankings at 140.

3A wrestlers to watch