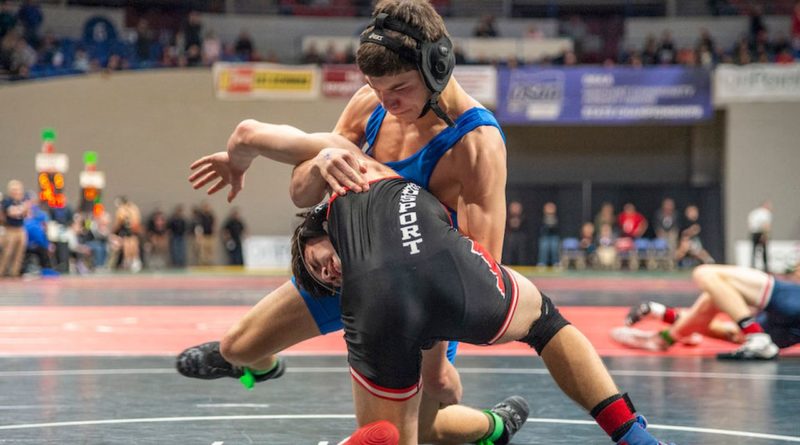 There are hundreds of standout wrestlers in Oregon and these lists are not intended to be comprehensive. Let us know about other 2A/1A wrestlers fans should know about this winter.

Solomon won his first state title in 2020, knocking off 106-pound top seed Tyson Patton of Santiam to help the Braves win their first team championship in 53 years. He added a second in June after bulking up to 132, defeating Glide’s Dennak Towne 11-4 in the final to cap a 16-0 season.

Guest had an up-and-down freshman season, but he ended it by reaching the state final at 106, losing to Illinois Valley’s Michael Miller.

DePue came up one win short of a state medal as a sophomore in 2020 but went undefeated (15-0) at 113 during the spring, with a 4-3 decision over Culver’s Debren Sanabria in the final giving the Loggers their first individual champion since 2004.

Butner has lost only once in three state appearances — an upset in the quarterfinals in 2020 upended his chances at repeating as a sophomore, but after coming back to finish third that year, he followed with a second title in June, defeating Culver’s Brody Piercey 7-4 in the 126 final.

Chase’s twin brother has also had an accomplished career with the Spartans, taking second at 113 at state as a sophomore and third at 132 in June.

Sanabria came up one win short of medaling as a freshman before coming into June’s state tournament undefeated, reaching the final at 113 before losing to Vernonia’s Brandon DePue.

Towne placed third at state as a freshman in 2019, then missed his entire sophomore season before coming back in the spring to place second to Reedsport’s Aaron Soloman at both the district and state tournaments at 132.

Burns failed to qualify for state as a freshman but has more than made up for lost time with back-to-back titles as a sophomore at 113 and in June at 120, beating two-time finalist Blake Owens of Central Linn 6-2 in the final.

Toomey has steadily climbed the podium at state each year, finishing fourth as a freshman, third as a sophomore and second in June, reaching the 170 final undefeated before falling to Siletz Valley’s Tanner Clark in sudden-victory overtime.

Coe announced himself as a sophomore, when he defeated top seed Brody Ballard in the first round at 160 to reach the final. He again made a state final in June, this time at 182, before losing 5-3 to Lakeview’s Morgan Ludwig to finish the spring 14-1.

Beauchamp is the top returner for the Cobras, placing third at 170 to finish a 25-2 season. He also qualified for state as a freshman but did not place.

Lathrop was one win shy of the medal rounds as a top seed his freshman season, then reached the final at 160 before losing to two-time champion Kaleb Oliver of Oakland in June.

Hodge grinded his way to a state title at 152 as a sophomore, beating top seed Kyle Hayner of Toledo in sudden-victory overtime in the final. He reached the semifinals at 160 in June before running into two-time champion Kaleb Oliver of Oakland, but he rebounded after losing by technical fall to place third.

Oliver has dominated the 2A/1A ranks since transferring from Boulder, Colo., the summer before his sophomore year. He has gone undefeated in 60 matches during his first two seasons with the Oakers, winning the 132 title in 2020 and at 160 in June, beating a former champion (Justin Hodge of Grant Union) in the semifinals and pinning Elgin’s Joseph Lathrop in the final.

Miller became the Cougars’ first state champion since 2011 by pinning Culver’s Aiden Guest in 48 seconds in the 106 final to finish a 10-3 freshman season.

Ludwig, a three-time state qualifier, went 27-2 as a junior and won the Honkers’ first state title in the past eight years by knocking off top seed Jace Coe of Heppner 5-3 in the 182 final.

Navarro has medaled twice in his three appearances at the state tournament, taking fourth as a freshman and third at 126 in June.

The Vikings had not had a wrestler reach a state final since 2012 before Earls knocked off No. 2 seed Malachi Hansen of Central Linn in the semifinals at 195. Earls, making his first state trip, then lost to two-time champion Seth Butler of Pine Eagle in the final.

Martinho wrestled for a state title as a freshman, losing to Oakland’s Ryan Oliver in the final that year. He came back in the spring to earn the top seed at 152 before getting upset in the semifinals; he bounced back to place third and finish the season 15-3.

Mestas is a three-time state qualifier who has placed third each of the past two years — at 132 as a sophomore and 138 in June to cap a 15-3 season.

Patzke is another wrestler hoping to complete the career medal climb this winter after placing fourth as a freshman, third as a sophomore and second in June, reaching his first final as the top seed at 145 before falling to Reedsport’s Christian Solomon 10-7.

3A wrestlers to watch