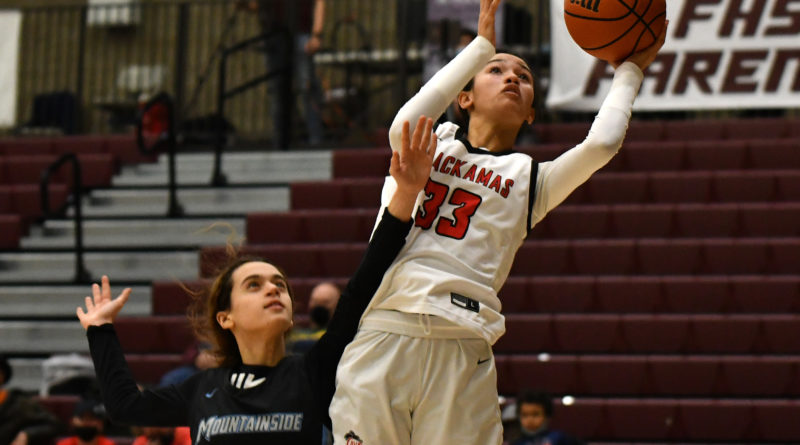 There was plenty of hype surrounding Jazzy Davidson’s arrival at Clackamas, and the freshman phenom has at minimum lived up to it, if not exceeded it.

Davidson, a 6-foot-1 guard/wing/forward hybrid, is already one of the top players in Oregon high school girls basketball just a month into her ninth-grade season. She has only scratched the surface of her potential for the Cavaliers (10-2).

“So far, I think we’re doing a good job of working towards our goals,” said Davidson, one of four freshmen starters for Clackamas. “But we know we still have a lot to improve on and we’re just trying to get better day by day.”

It didn’t take long for Davidson, who picked up a scholarship offer from Stanford in October, to make an impact at the high school level.

In Clackamas’ second game of the season, Davidson recorded 24 points, 12 rebounds and nine blocks in a 58-56 overtime win over then-No. 1 South Medford. After the game, Panthers head coach Tom Cole told the Medford Mail Tribune that Davidson has the potential to be the best player in Oregon history.

“I’ve seen some great freshman players who have come through our state, with Cameron Brink and Mercedes Russell and Evina Westbrook and Jordan Reynolds and Jaime Nared,” Cole said to the Mail Tribune. “But I have never seen a freshman who is as poised and as gifted as she is as a freshman.”

Added Mountainside coach Glen Lee, who coached Brink for her senior season: “Jazzy is very talented. She can take it off the dribble, she can hit the outside shot. She’s a very good player.”

Beaverton’s Lainey Spear, the primary defender on Davidson, tried to force the left-handed Davidson to go right as often as possible. Davidson said she’s well aware of the scouting report.

“This year I’m looking to improve my right hand and expand my game by making myself more versatile,” she said. “I want to be able to shoot more consistently from the outside and push myself as a ball-handler.”

The Clackamas coaching staff has been impressed with Davidson since Day 1. Despite her standing as one of the country’s most prized recruits, Davidson isn’t interested in receiving superstar treatment.

“In the summer, she was a 14-year-old playing against 17-year-olds who were bigger, stronger and faster than her. It forced her to raise her game and just keep working.”

Davidson said she has enjoyed the change of pace from high-level AAU to high school ball.

“They’ve all known each other for so long, even the older girls on the team,” Costello said. “They’ve played some club ball together on the side, they’ve hung around with each other a lot in the offseason and they work out together.”

Along with chemistry, there is also plenty of talent ranging from freshman to senior on Clackamas’ roster.

In the South Medford showdown, sophomore Ella Shackleton sunk the game-winner with eight seconds remaining. Peterson paced the team against Beaverton, finishing with 17 points on 7-of-10 shooting.

“As a program, we’re really trying to emphasize team, team, team; everyone contributes,” Costello said. “It’s about who is going to step up and make plays at any given time, because we’ve got so many weapons. If someone wants to try to guard Jazzy or Dylan, then (Eliza Buerk) or Ella (Cave) or Sara or Avery can step up. It’s tough to stop, and our girls know that.”

The Cavaliers are doing all of this without star guard Rhyan Mogel, the reigning Mt. Hood Conference player of the year. Mogel, a junior, is out for the season because of an ACL injury.

Despite the loss of Mogel, the Cavaliers still have their eyes on a conference title, state tournament appearance, and much more. With Davidson leading the way, it’s easy to see why.

“The first thing for us is league champions,” Davidson. “And after that, the state championship is definitely our big goal for the year.”