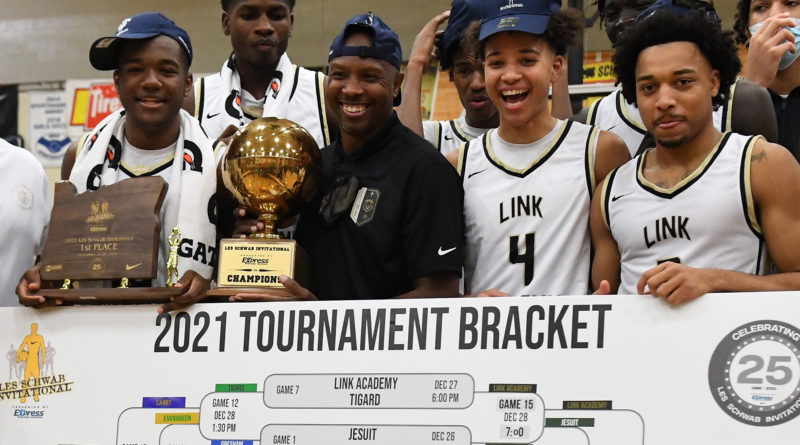 Link Academy entered the Les Schwab Invitational as the heavy championship favorite, and the startup Lions proved to be worthy of their top-10 national ranking.

Before a near-capacity crowd at Liberty High School, Link fended off a spirited effort from Tualatin to earn the LSI title, 83-60. The first-year program from Branson, Missouri, has notched several other high-profile tournament wins this season, including the Tarkanian Classic (Las Vegas) and the Memphis Hardwood Classic.

“We are like the new kids on the block,” said 6-foot-10 senior center Tarris Reed Jr., a four-star prospect and Michigan signee. “People don’t give us our respect, so we’re coming out to tournaments and trying to win their respect and get as many wins as possible.”

The Lions (20-0), ranked eighth in the SBLive/Sports Illustrated Power 25, earned plenty of respect in the Pacific Northwest by winning their four LSI games by a total of 118 points.

The 25th LSI was originally slated to feature two other national powers in Gonzaga (Washington, D.C.) and Isidore Newman (New Orleans), but both dropped out late in the process. That left Link with an even larger target on its back as the only out-of-region team in the field.

“Coach (Rodney) Perry always tells us, ‘Leave no doubt,’” Reed Jr. said. “Coming into this tournament, we knew what we needed to do, and we came home with the W.”

The Timberwolves (9-1), who blew by Beaverton in the semifinals, rallied back from a 17-point halftime deficit to make it a game.

Senior guard Noah Ogoli scored 19 of his game-high 24 points in the second half, including a crafty layup that made it 49-42 midway through the third quarter. The bucket capped a 17-7 Tualatin run to begin the period.

“We changed our offense up — that was probably the key right there,” said Ogoli, an all-tournament team selection. “We spread them out more and did more backdoors. I feel like that got them moving more and got our guys more looks, and everyone was just buying in on defense to get stops and doing the best we could to contain their bigs.”

Link stretched the lead back to 20 at the beginning of the fourth, but an Ogoli transition basket made it 65-55 with 4:24 remaining. Tualatin was unable to pull closer as the Lions’ massive front line took over the game.

“Obviously, that’s a different type of team,” Timberwolves head coach Todd Jukkala said. “We just told our guys to go out there, play hard and compete — that’s kind of our No. 1 thing — and I thought that’s what our guys did. … I couldn’t be more proud of our guys for just competing and playing hard.”

Added Ogoli: “I played AUU against a bunch of people like that, just not all together, obviously. But it was a fun experience, and my goal was just to go out there and compete and show people what I can do.”

“They are a great team,” he said. “They put up a dogfight and it was fun playing them.”

The Lions jumped out to an 11-0 lead before Steppe got Tualatin on the board with a three-pointer. An Ogoli triple pulled the Timberwolves within four, but Link closed the quarter with a Julian Philips alley-oop from Trey Green that made it 24-13.

Reed and Walsh both had highlight dunks in the second quarter as the Lions headed to the locker room up 42-25.

“We had a little rough start, a slow start, I wish we would’ve had a better start,” Jukkala said. “But after that, we kind of settled down and got after them.”

Though the Timberwolves were hoping to pull off an upset for the ages, Ogoli said the team is thrilled with its LSI performance. Tualatin defeated Churchill, Lake Oswego and Beaverton on consecutive nights, a feat that should pay dividends down the road.

“This means a lot to us,” Ogoli said. “To place second is pretty good and makes a statement to the entire state.

“I think the LSI really sets us up for a good path down the road to see what kind of shape we’re in to play four games in a row, just like we’re going to be doing at the Chiles Center (for the 6A state tournament). We have a deep team, so I feel like we can go really far.”