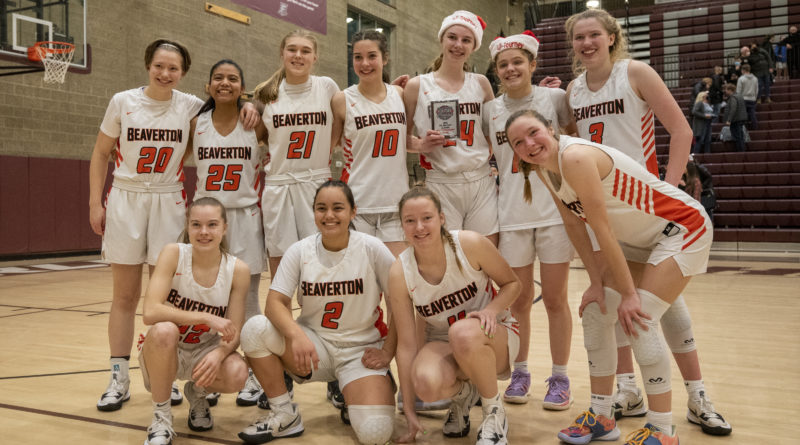 PORTLAND — A lot of the talk around the state recently has centered on the rise of Clackamas.

The Cavaliers, featuring four freshmen in the starting lineup, jumped out to a 9-0 start and won games by an average of 25.9 points — good enough to take over the No. 1 spot in the Class 6A coaches poll the past couple weeks.

The team they leapfrogged in the poll? Beaverton. In a matchup of two heavyweights in the state, the No. 2 Beavers showed they’re not quite ready to relinquish that top spot yet with a convincing 50-44 win over Clackamas on Thursday on the final day of the POA Holiday Classic at Franklin High School.

“It’s always nice to win against a really talked-about team,” Beaverton junior Lainey Spear said. “I think while they have a lot of talented freshmen and they’re really well-respected, and I respect them all, I think we also have a lot of talent. It was really nice to show that tonight.”

Spear stepped up on both ends of the court with 10 points and five rebounds and, more important, was up to task by using her size, length and athleticism to help limit Clackamas standout freshman Jazzy Davidson to eight points. Spear said her experience playing against Davidson during summer ball was a big help.

“Obviously, Jazzy is a really good player,” Spear said. “I really respect her. I’ve played her before, and she likes to drive. She can shoot. I mean, she can do everything, but I just wanted to take away her left hand and make every shot tough for her.”

Beaverton looked poised to run away when it built a 33-15 lead at halftime behind a smothering defense that didn’t allow a point over the last seven minutes of the second quarter.

“We moved the ball, we were aggressive on defense, we got stops,” Beaverton coach Kathy Naro said. “Today, we were more the aggressors on both sides of the floor.”

Clackamas had other intentions when its defense came alive after the break. The Cavaliers held Beaverton to zero points on 0-of-8 shooting in the third, which allowed them to trim the 18-point deficit to 33-26 entering the fourth.

Clackamas kept hanging around and when freshman Sara Barhoum scored to cut Beaverton’s lead to 42-36 with 2:01 left, it was only a two-possession game. But the Beavers held on by converting enough free throws down the stretch to seal the victory.

Beaverton didn’t make a field goal for the last 5 minutes of the game but went 9 for 16 from the free throw line in the fourth between senior Emily Rice, junior Madison Naro and junior Zoe Borter to hold off the Cavaliers.

The Beavers nearly had a bad case of deja vu after seeing a big halftime lead evaporate the night before in Wednesday’s 53-46 loss to Barlow — their first defeat of the season. It left them feeling upset and a little frustrated, but they knew there was a quick opportunity to bounce back.

“We weren’t really ourselves (against Barlow),” said Borter, who had a game-high 20 points on 5-of-9 shooting and five rebounds. “I felt like we were kind of separate. Tonight, we just decided to come together and have fun. Like, it’s fun to play basketball. We came together as a team and just played hard, had fun and got the win.”

Clackamas freshman guard Avery Peterson said she was happy to see her teammates give more energy and nearly come back in the second half.

“I feel like if we came out with that kind of energy, things would’ve been different,” said Peterson, who scored a team-high 17 points on 7-of-9 shooting with three 3-pointers. “But Beaverton is a really good team and they capitalized.”

Has there been any pressure to live up to the expectations of being ranked No. 1 with a young squad of seven freshmen on the roster? Peterson said “not really” as they have the expectation to win every game, no matter what the rankings are.

“I think being No. 1 is cool, but it’s not what we really wanted,” Peterson said. “We just want to stay together, win games together. Tonight was not the best.”

There was a common thread among Beaverton’s players and coaches, and that was they had a ton of respect for what is building at Clackamas this season and the next three years with their freshmen.

Also, one can’t help but think of a potential rematch down the road between these two teams come March.

“They’re phenomenal,” Kathy Naro said. “I’ve been watching Clackamas and they are so talented in so many different areas and super quick. To have a chance to compete with them and come out with a win, that’s good and they’re really good.”

For now, the Beavers (7-1) got the “confidence booster” they needed with Metro League play starting in a couple weeks, said Spear.

“The loss last night really took a toll on us,” Spear said. “But obviously, winning against the No. 1 team was really, really fun. … I think tonight demonstrated who we are as a program. Our cutting, our passing, us finishing the game, that just showed who we are and I’m proud of us.”

Notes: Madison Naro had 13 points and four rebounds for Beaverton, which shot 15 of 37 from the field (40.5 percent). … Eliza Buerk totaled eight points and six rebounds for Clackamas (9-1). Davidson added eight rebounds, and Barhoum had five points for the Cavaliers, who shot 18 of 49 from the field (36.7 percent). … Clackamas outscored Beaverton 29-17 in the second half.