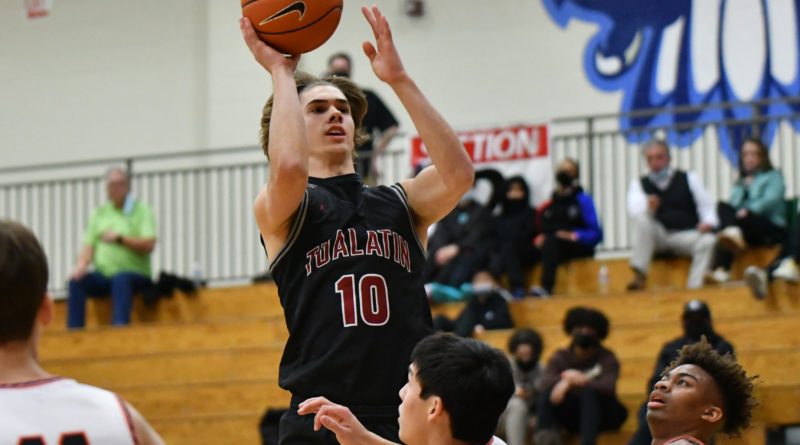 With a seemingly endless supply of athletic and tenacious guards, Tualatin’s transition game is a nightmare to defend.

The Timberwolves terrorized Churchill and Lake Oswego to begin the Les Schwab Invitational, and Beaverton suffered a similar fate in Wednesday night’s semifinal round at Liberty High School.

“I think a lot of teams can’t keep up with us in transition,” Ross said. “(Beaverton) doesn’t play a ton of guards, so we wanted to get them tired and make them really have to work on the defensive end. We did that tonight, and it showed on the scoreboard.”

The Beavers (6-3), who advanced to the semis with tight wins over Central Catholic and Cleveland, wanted to control the tempo and slow down high-flying Tualatin. The strategy didn’t come to fruition in the first all-Oregon LSI semifinal since a 2011 matchup between Jesuit and Central Catholic.

“In transition, they are very, very tough,” Beaverton head coach Andrew Vancil said. “We were trying to send four guys back the whole game, and we just didn’t do a very good job with that in the first half. … We were trying to grind it down and keep it in the 40s and 50s, but the way that they play transition basketball, we just have to execute better.”

Tualatin led 14-10 after a competitive first quarter and went up 22-10 on an Ogoli fast-break and-one layup. The Timberwolves continued to pour it on and wrapped up the first half with a 30-14 advantage.

A 7-0 run to start the third quarter put it away for Tualatin, which has scored 76 or more points in six of its nine games this season.

“We talked about coming out and getting a good start, and for the most part this year we’ve been able to do that,” Timberwolves head coach Todd Jukkala said. “I was a little concerned that we wouldn’t control the pace because they’re really good about getting back and getting into their zone. But they came out in man, and they are tough with that, too. But we were able to get out in transition, and that really helps our game.”

To go along with his 16 points, Ross also finished with a game-high six assists. The senior said the Timberwolves are a driven group that loves to compete.

“We’ve got a bunch of guys who want it more than our opponents,” he said. “I think the best thing about it is we’re not satisfied at all, and it shows in our record. … But we’ve still got more to prove coming out tomorrow. It’s going to be the toughest game we’re going to play all season, so we can’t be too excited yet.”

Tualatin will be unable to match Link’s size and length, but Jukkala expects the Timberwolves to battle against one of the nation’s top teams. In Wednesday’s first semifinal, Barlow hung around for a half before the Lions pulled away.

“I think Barlow kind of set a little bit of a template there,” Jukkala said. “You just compete. You play hard, compete and see what happens. Obviously they’ve got size and athleticism and talent, but you’ve just got to go and play.”

Max Elmgren paced Beaverton with nine points and sophomore reserve Aidan Rice added eight. Brady Rice, who was averaging 26.5 points at the LSI entering Wednesday, was held to four points on 2-of-8 shooting.

Vancil said a couple Beavers, including Brady Rice, are a little dinged up entering the team’s third-place matchup with Barlow.

“So we’re going to be calling on some guys that haven’t been in our rotation quite as much,” he said. “But anytime you can play for a top-three spot in the LSI, that’s a great weekend, so we’re going to try to do that.”