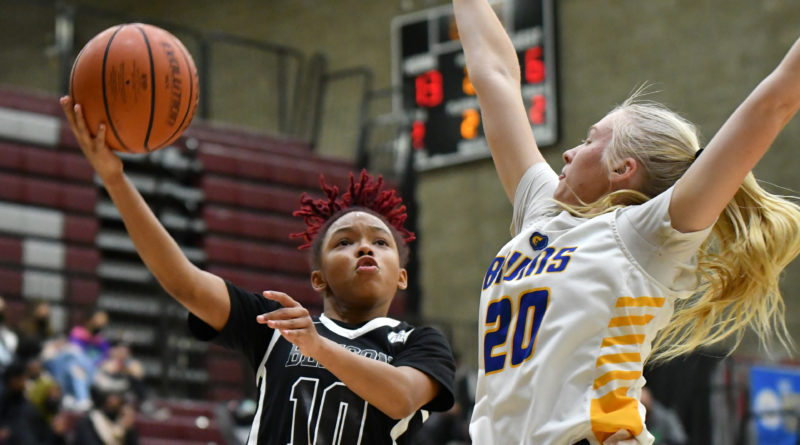 The talented, inspired Barlow girls basketball team definitely got off to a roaring start.

However, the Bruins weren’t able to cruise easily to the finish — not even close.

A persistent, determined Benson squad made sure of that.

Barlow, after opening a 17-point advantage early in the second quarter, fought off a furious Benson rally attempt to get a hard-fought 48-43 victory over the Techsters in the Pacific Office Automation Holiday Classic on Thursday at Franklin High School.

“It felt good. It was rewarding, for sure,” said Barlow junior guard Kennedie Shuler, who scored 13 points, including 10 in the first half. “Benson is a really good team. They’re amazing defensively, and I’m just proud of how we stayed composed. Even though they started to creep back on our lead, we held our own.”

“It was a tough one, for sure,” said Barlow junior wing Annie Koenig, who had a team-high 14 points. “But we were really resilient, and we really battled.”

With the victory, its fifth straight, Barlow, which entered the game tied with Benson for the No. 5 spot in the latest Class 6A coaches poll, improved to 8-2 on the season.

“We improve every game, and we’re working well as a team,” Koenig said. “I think that’s our strong suit. That’s when we shine the most.”

At the POA Holiday Classic, Barlow also defeated Sherwood 61-34 on Tuesday, and the Bruins avenged one of their two setbacks on the season by topping Beaverton 53-46 on Wednesday.

In the revised tournament format, there was no bracket play and no official champion, but Barlow was one of two teams, along with Jesuit, which went 3-0 in what was originally going to be the Diamond Bracket.

“We’ll take what we can get. Three wins sounds pretty good to us,” Koenig said with a smile.

“It means a lot,” Shuler said. “We ended preseason strong, and now we’re going into the Mt. Hood Conference, and we’ve got that first tough game against Clackamas. It was a good three games for us, before another hard game.”

Benson, which suited up just seven players for Thursday’s game, with among the missing being 6-foot-2 standout sophomore forward Mahogany Chandler-Roberts, moved to 3-3 on the season with the loss.

“It was OK. I feel like we could have had a better start,” said Benson sophomore guard Maurianna Hashemian-Orr, who had 14 points. “We didn’t have our big tonight, big Mahogany, so we had to just figure out how we could do some stuff without her. We had to play small, but overall, we did a good job. We didn’t let go of the rope, and we kept on pushing.”

Hashemian-Orr scored the first basket of the game, coming on a follow-up shot, but Barlow took off from there. The Bruins responded with a 6-0 run, which included a layup by senior Melanie Hiu, coming off a pass from Shuler, who followed with back-to-back baskets on drives to the hoop, giving Barlow a 6-2 lead with 5 minutes and 27 seconds left in the first quarter.

Shuler scored six more points in the opening period, and Koenig sank a 3-point basket, helping the Bruins take a 19-8 lead going to the second quarter.

The Bruins kept rolling from there. While Benson was struggling to find its offensive rhythm against Barlow’s trapping zone defense, the Bruins got 3-pointers by Koenig and junior Olivia Payne, pushing their lead to 25-8 with 3:55 before halftime.

“We started off strong. We really wanted it,” Shuler said. “We moved the ball really well and got good shots.”

“Coming out strong is one of the things we focus on the most,” Koenig said. “We have that talk before every game, that we need to stay intense, and that showed tonight.”

Benson responded with a 7-0 run, which included a 3-pointer by Hashemian-Orr, two free throws by junior Malaya LeSueur and a foul-line jumper by junior Onna Brown, trimming the Barlow lead to 25-15 with 1:00 left in the second quarter. But Barlow, with senior Lindsay Barden sinking a 13-foot jumper with 31 seconds left in the period, would take a 27-15 advantage to the halftime break.

The Bruins started rolling again in the third quarter. They pushed the margin back to 17, at 34-17, when junior Rilyn Quirke sank a short-range bank shot, off a pass from Shuler, with 6:21 left in the period.

Barlow, getting 3-pointers from Shuler and Payne later in the period, would take a 40-26 lead to the fourth quarter.

Koenig opened the scoring in the final stanza with a 3-pointer from the top of the circle, giving Barlow a seemingly safe 43-26 advantage with 7:10 remaining.

As it turned out, that lead was anything but safe.

LeSueur ignited a 9-2 Benson run with a three-point play. Hashemian-Orr made another follow-up shot, and LeSueur scored on a short-range jumper following a steal by Brown, who added two free throws, cutting the Barlow lead to 45-35 with 4:01 to go.

The Techsters would cut into the lead even more. Three free throws by LeSueur and a 3-pointer by Hashemian-Orr, coming off a pass from the corner by sophomore LuLu Kennybrew, got Benson within five, at 46-41, with 2:20 left.

“I feel that Mahogany being out just motivated us,” Hashemian-Orr said. “Coming out of halftime, and seeing how many points we were down, we just kept on going. During the game, we started figuring it out on defense.”

But the Techsters weren’t able to get any closer.

Barlow, looking to eat time off the clock in the final two minutes, got a free throw from both Hiu and Koenig in the final 30 seconds. Meanwhile, the Bruins’ defense helped force Benson into two missed field goal attempts, with Koenig snaring the rebound following each misfire, helping Barlow hold on for the 48-43 victory.

“We tried to stay within ourselves,” Koenig said of the finish. “We have to stay in our own heads. We can’t let anything on the outside get to us. We talk each other up, and we just play together — that’s what keeps us going.”

“We stayed composed and, at the end, we had good defense,” Shuler said.

In addition to her 13 points, Shuler had nine defensive rebounds, four assists and a steal in the victory.

“I enjoy the game. I love it,” Shuler said with a smile.

Koenig was 4 for 6 from 3-point range on her way to scoring 14 points. She had five rebounds, two assists and two steals. Payne scored eight points. Barden had six points to go with three assists and three rebounds. Hiu added three points, four rebounds and four steals. Quirke had four points and four rebounds.

“This was really important,” Koenig said. “We knew we were going to have a tough preseason, and we just wanted to get better and work as a team, and I think we really did that. This was great, really great.”

“We came in and really wanted it,” Shuler said. “We played well together.”

For Benson, LeSueur led all scorers with 18 points, getting 16 of her points in the second half, including 10 in the fourth quarter.

The 5-foot-6 Hashemian-Orr had six rebounds and two steals, in addition to providing some key leadership.

“I think this will help us. You never know what’s going to happen, but we know that we did really good, even playing very small like that. This was a really big step for us,” Hashemian-Orr said. “We’re going to get in the gym and keep on doing what we’ve been doing and see what happens. This was really fun. We love the energy, and we love being competitive. This just motivated us. We just love it.”

The Techsters will return to action Jan. 4, when they play at Franklin in a Portland Interscholastic League game starting at 7 p.m. Barlow will be back on the court Jan. 5, when it opens Mt. Hood Conference play by hosting Clackamas in an early-season showdown starting at 7 p.m.