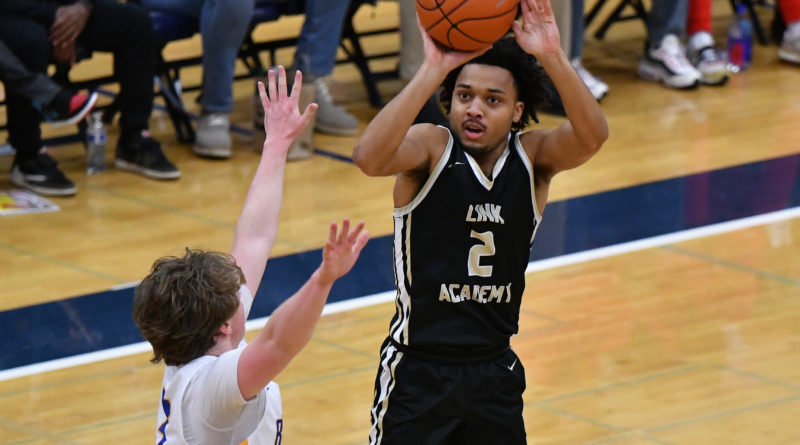 After defeating Tigard by 35 and Jesuit by 27, the Lions of Branson, Missouri, took down Barlow on Wednesday night in an LSI semifinal, 84-51. Link (19-0) held a slim eight-point halftime lead before stepping on the gas in the third and holding the Bruins (5-3) to zero fourth-quarter points.

“We came out at the start of the game playing exactly the way we’re supposed to play. Then we got undisciplined, started to gamble, started to disrespect the game and disrespect our opponent,” Lions head coach Rodney Perry said.

Link, a first-year program that is ranked eighth in the SBLive/Sports Illustrated Power 25, will face Tualatin at 8:30 p.m. Thursday in the LSI title game.

Undersized and outmanned, Barlow used the three-point stripe to hang around for the first two and a half quarters. The Bruins knocked down eight first-half threes and finished 13 of 35 (37 percent) for the game.

“We’ve got some kids who can shoot it, so that helps a lot,” Barlow head coach Tom Johnson said. “We made some really tough shots.”

Link scored the game’s first 11 points, all coming in the paint or at the foul line. Connor Hills and Tyson Roupp both knocked down early threes for Barlow, but the Lions continued to get any shot they wanted en route to a 29-11 lead after one quarter.

The second quarter belonged to the Bruins, who got four triples from freshman star Jalen Atkins. His final long-distance shot of the period made it 43-35 at halftime.

“We defended a little bit better in the second quarter as well,” Johnson said. “You can’t emulate that size and athleticism when you practice, so it took us a quarter just to get used to the pace of the game.”

Link senior Jordan Walsh, an Arkansas signee, was not happy with the Lions’ second-quarter performance.

“There was a spurt there where we just sat back and got content, and we can’t do that anymore,” he said. “That’s a bad habit for the team, for me. We’ve got to stop that.”

The Lions upped their defensive intensity after halftime and got back to attacking the basket. A Julian Philips three-pointer made it 69-48 late in the third, and the five-star forward threw down a pair of nasty fourth-quarter dunks while playing sticky on-ball defense.

Perry said the Lions regularly get better on defense throughout a game.

“Defense is what we lay our hat on and that’s what we feel our identity is,” he said. “That’s the way I was raised and brought up by the coaches I played for, because defense wins championships. The best defensive team is always going to win.”

Walsh led the way with 26 points (11 of 13 shooting), 10 rebounds, two assists and three steals. Trey Green also had a strong game with 14 points and six assists.

Atkins made six three-pointers and finished with a team-high 19 points and five assists. Hills drained five en route to 17 points. The Bruins were without senior forward Nathan Jones, who sat out with an upset stomach.

Johnson said he was proud of the team for reaching the LSI semifinals.

“It’s been great for us,” he said. “I love this group of kids. They work hard, they are committed and they are a lot of fun to be around.”

On Tuesday, Perry took the Lions on a tour outside the gym at Liberty where banners of past LSI champions are displayed. There are also photographs of several former LSI participants who went on to play in the NBA.

With a victory on Thursday against Tualatin, Link would join other national powers like Mater Dei, Oak Hill and Sierra Canyon as LSI champions.

“I wanted them to understand the tradition of this tournament so they know it’s a big-time deal,” Perry said. “I told them in the locker room that one day, hopefully this tournament will still be going on when they have their kids, and their kids can come here and they can say, ‘Hey, you see that banner? That’s the one your dad helped put up there.’ So, we understand how important it is for us to be able to come out here and win this tournament.”