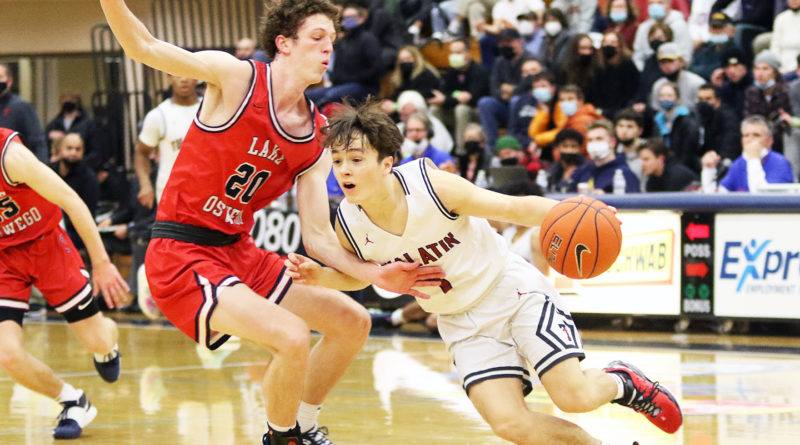 The Tualatin boys basketball team has a really good memory.

The players on the Tualatin squad turned those all-too-vivid memories into motivation — big motivation.

And the Timberwolves turned all of that motivation into an impressive victory over their Three Rivers League rival.

Tualatin, still stinging after suffering three consecutive losses to Lake Oswego dating to the 2019-20 season, wiped away that sting by downing the Lakers 77-67 in a quarterfinal game of the Les Schwab Invitational on Tuesday at Liberty High School in Hillsboro.

“That’s a big win,” said Tualatin senior guard Noah Ogoli, who scored a game-high 21 points. “We haven’t beaten Lake Oswego the past two years, so to win that felt really good, even though we’re going to have to see then two more times (in Three Rivers League play). That was big motivation. That win will move us forward in the tournament. It felt nice, and it was a team win.”

“Oh, this is a big win, since the last two years we’ve fallen to LO,” said Tualatin junior guard Josiah Lake, who had 13 points. “Oh yeah, that was motivation. We came in and all we wanted to do was win.”

Tualatin, which entered the contest ranked No. 1 in the state in the latest Class 6A coaches poll, improved to 8-0.

“We have a lot of football guys, so I feel that our physicality really helps on the court,” said Ogoli, who was part of the Tualatin football team which reached the Class 6A state championship game. “Other teams don’t play as physical, and that’s to our advantage.”

“It’s just playing as a team,” Lake said of the Timberwolves’ fast start to the season. “Everyone buys into the program.”

Lake Oswego, which opened the Les Schwab Invitational with a 78-37 win over Evergreen, Wash., in a first-round game Sunday, moved to 2-6 on the season.

“I’m having a critical lens early this year, but even in our two wins, we haven’t put together a whole game yet,” Lake Oswego coach Marshall Cho said. “In one sense, it’s exciting, but in another sense, it’s frustrating, because we have league coming just around the corner. But I believe in this coaching staff, and I believe that these kids will figure it out.”

The Three Rivers League rivals got off to a back-and-forth start in Tuesday’s quarterfinal. There were nine lead changes in the first seven minutes. Tualatin, with junior Jack Wagner scoring on a tip-in, junior Ryan Schleicher converting on a drive to the basket, and Wagner sinking a free throw, went on a 5-0 run to take a 17-13 lead with 0.9 second left in the opening period.

That would continue to be a theme for the game, as the Lakers made buzzer-beating baskets in all four quarters.

“That’s the issue for us right now — we’ve just had moments, but we haven’t put together an entire game yet,” Cho said.

Tualatin got off to a roaring start to the second quarter. The Timberwolves opened the period with a 16-4 run, which included three-point baskets by Schleicher and senior Ashton Rose and four free throws by senior Malik Ross, giving Tualatin its biggest lead of the game to that point, at 33-20, with 5:15 before halftime.

Lake Oswego fought back. The Lakers, with senior guard Luke Brauner scoring seven points in a span of 2:29, trimmed the margin to 37-31 with 1:09 left in the period.

Lake opened the third quarter with another three-pointer, upping the lead to 43-34, but persistent Lake Oswego fought back again. The Lakers, getting a follow-up hoop by senior Sorena Torabi, two layups by Reno off assists from Grady and senior Christian Rowell, two free throws by Rowell and a basket on a short-range banker by Grady, cut the lead to 46-44, leading to a Tualatin timeout with just over four minutes left in the quarter.

That’s when the Timberwolves — and Ogoli — took charge.

Ogoli scored 11 points and dished out an assist in the final 4:13 of the period, helping Tualatin open a 63-50 lead going to the fourth quarter.

“For me, my motivation in the second half was that I had been in foul trouble, so I had to turn it on and help lead my team to this win,” Ogoli said.

Ogoli continued with his motivated play in the fourth quarter. He had a free throw, a steal and ensuing hoop on a drive to the basket, and a huge blocked shot on what looked to be an open Lake Oswego layup, resulting in transition points on the other end of the court.

Sophomore Jaden Steppe and Ross each added four points in the final stanza, helping Tualatin close out the 77-67 victory.

Ogoli scored 17 of his game-high 21 points in the second half. He also had five assists, three steals and the one big blocked shot.

“I was really fired up for this one, because I personally didn’t do very well against Lake Oswego the past two years,” Ogoli said. “It was fun. We have a lot of friends on the other team, and it felt good to beat them for once.”

The 6-foot-1 Lake had a game-high nine rebounds, two assists and three steals to go with his 13 points.

“I shot the ball well tonight,” he said. “I thought defensively I played really well. Rebounding, as a team, we did really well.”

Tualatin made 27 of 62 shots from the field, with five three-pointers, and 18 of 27 free throw attempts. The Timberwolves came up with 14 steals.

“Defense and coaching were big,” Lake said. “We called the right plays to get players good looks.”

With the win, the Timberwolves advance to the tournament semifinal round, where they’ll face Beaverton on Wednesday in a game starting at 8:30 p.m.

“That means a lot,” Ogoli said. “It’s our first time in the Les Schwab Invitational, and we’re doing really well. As a team, we’ve got off to a really good start.”

“We’re taking it one win at a time,” Lake said with a smile.

Lake Oswego made 22 of 55 shots from the field, with six three-pointers, and 17 of 20 free throw attempts.

“Absolutely, we’re looking to benefit from this,” Cho said of the tournament. “It’s unfortunate that the two out-of-state teams couldn’t come, but this is giving us a sense of what basketball will look like in March, as well. So, that’s always our goal, to be playing our best basketball in March, and this is part of that journey.”

The Lakers will face Cleveland in a consolation game Wednesday at 5 p.m.

“Now, we have to start putting those tough losses, and the lessons, to actualization. We’ll see how we respond tomorrow against a good opponent,” Cho said. “I would like our guys to experience what it’s like to truly put a whole game together, trust in each other, be completely present, and, at the end of the day, have the courage to know that they could take it.”