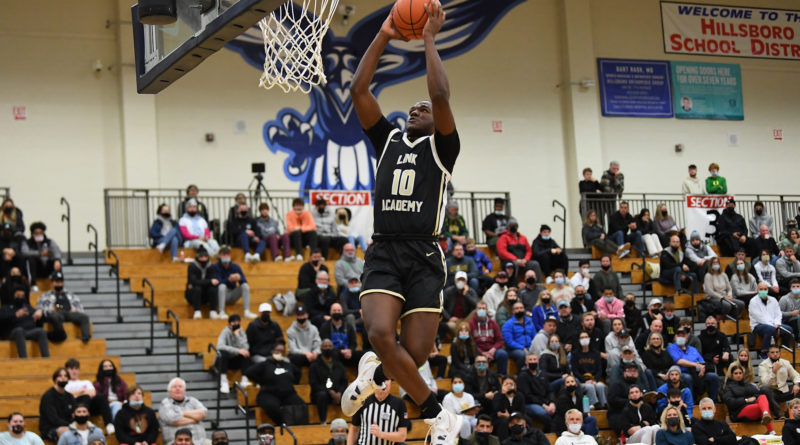 HILLSBORO — Link Academy arrived in Oregon with a lot of hype, a sparkling 17-0 record and sky-high expectations that the team would roll through this week’s Les Schwab Invitational.

The Lions of Branson, Mo., come in No. 8 in the latest SBLive/Sports Illustrated Power 25 national high school basketball rankings, but still, questions remained for them.

How would they respond to a full eight days off for the holidays with just one quick practice on Christmas night before taking a flight to Portland for this five-day tournament?

Well, the answer came quick. Link Academy was every bit as good as advertised with a roster stacked of NCAA Division I prospects and overwhelmed Tigard, 80-45, in the first round of the LSI on Monday night at Liberty High School.

The Lions put on a dazzling display of perimeter shooting, highlight dunks and dominance inside the paint. A spirited Tigard squad was simply no match against the talent it faced.

“For us being off that long and getting that one practice in, I think we did come out today pretty good,” said forward Julian Phillips, who committed to LSU and is ESPN’s 14th-ranked senior in the country. “There’s still some room for improvement, stuff we have to figure out later on in the tournament, but for today, I felt we did well.”

The 6-foot-8 Phillips led five Lions in double figures with a team-high 20 points on 6-of-7 shooting, including a perfect 5 for 5 from three-point range.

“Coach (Rodney Perry) says there’s a lot of eyes out here looking at us,” Phillips said. “So, I think we’re just out to prove we’re one of the best teams in the country. We can go pound for pound with anybody. We’re just trying to prove and show everybody that we are a top team in the country.”

Tigard led briefly in the early going, taking a 5-2 lead in the opening minute on back-to-back baskets by juniors Malik Brown and Kalim Brown. The Tigers even hung around midway through the first quarter when junior Sawyer Wolf’s field goal had them facing an 11-9 deficit.

But the hope for an upset quickly faded. Link Academy jumped out to a 20-point lead in the second quarter and led 40-23 at halftime. The lead grew to 33 points in the third before the Lions eventually won by 35.

Kalim Brown said it was a “great experience” for Tigard to learn from moving forward.

“We came out with a bang, we had a lot of momentum,” said Brown, who led the Tigers with 14 points. “Then they sped us up and that’s when we started not playing like us. (But) it was amazing to play a ranked team with 5-star and 4-star players.”

Despite the blowout win, Perry kept his players in the locker room for more than a half-hour after the game to emphasize their defensive miscues. Perry said his goal is to hold opponents to 10-12 points per quarter. Tigard scored 14 points in the first and 15 in the third.

“Winning is hard, doesn’t matter who you’re playing against,” Perry said. “That’s the thing I think some people take for granted. They don’t realize how hard it is to win, especially when you have a team that’s favored and another team that doesn’t have anything to lose. So, our biggest deal with our performance today was I didn’t like how we performed on the defensive end. We shot it well. Our percentages were really good, but that’s not our identity.”

Link Academy’s players recognize if they don’t perform, there are more than enough players on the roster waiting for their shot. It’s a good problem to have, but for Perry, it’s part of the expectations to hold his players accountable and play the game the right way.

“We’re just trying to build great habits,” he said. “But again, they’re teenagers, so sometimes when you tell teenagers something, they’re like, ‘Ah, I hear you but I ain’t listening to you,’ so you have a tendency to get overconfident. I always tell these guys, don’t judge a book by its cover because they could have a bad cover, but it could be the best book you’ve ever read. We’re respecting everyone and not overlooking anyone because on any given night, anybody can beat anybody.”

The sacrifice to win is part of the buy-in from every player in the program, according to Perry. No one should expect to average 20 points per game, or be the leading scorer every night. It could be anyone.

The coaching staff compares the situation with being a freshman at the collegiate level, where players sacrifice their stats to show they can be a part of a winner while playing team ball.

“If you score 12-14 points here, that’s the same thing as scoring 25 at a traditional high school,” Perry said. “Because at the end, they’re going to be like, ‘Coach, what you mean? You want me to sacrifice my scoring?’ Yes, I do.

“There’s a lot of players that don’t want that. They want to go out there and score 20 points and things like that. We were very pleased with how this team has actually conformed to where we’re a team. A true team.”

For many of the players visiting the Pacific Northwest and Portland for the first time, they said it means a lot to play at the LSI based on its history. Although a few big-time competitors dropped out last minute — including out-of-state programs Gonzaga College and Isidore Newman, plus local powerhouses West Linn and Grant — it’s still an opportunity to show what they can do in one of the most well-known holiday basketball tournaments in the country.

The tournament, which started in 1996, has seen big-time program Oak Hill Academy win the title seven times. NBA stars including Carmelo Anthony, Kevin Durant, Kevin Love and Ben Simmons have played at the LSI. That past hasn’t gone unnoticed.

“It always feels good to walk in the footsteps of people who are successful, people you look up to like KD,” Walsh said. “Me being here and playing where he’s played, trying to do the things he’s done, I feel like it’s a stepping stone to be great. Hopefully I can touch some of that greatness.”

Said Phillips: “It definitely means a lot. The people you mention, those are NBA legends. Being in the same hallways, the same gym they walked on, I think that’s pretty big. I’ve never been out to Portland either, so it’s pretty cool to be out here and nice to get a chance to play in this tournament.”