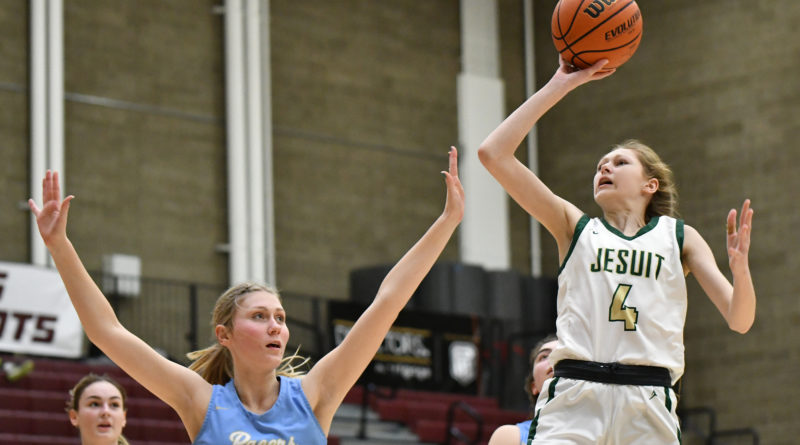 The Jesuit girls basketball team was eager to flush its loss to Clackamas and begin a new winning streak.

Eleven days after their worst performance of the young season, the fourth-ranked Crusaders put together a complete effort in a 60-44 victory over No. 7 Lakeridge at the Pacific Office Automation Holiday Classic. Jesuit shot 51 percent from the field, held Lakeridge to 32 percent and led wire-to-wire at Franklin High School.

“We had a little bit of a sour taste in our mouth from our last game before Christmas, so we just wanted to have fun and compete and execute a game plan for 32 minutes,” Crusaders head coach Jason Lowery said. “I think we did that.”

Jesuit (7-1) won its first six games of the season before stumbling 55-32 at Clackamas. Lowery said the Cavaliers brought their A-game, and the Crusaders did not.

Tuesday was a different story as Jesuit played strong defense from the start and ran the offense with efficiency.

“We didn’t get the result we wanted against (Clackamas) and didn’t really play how we like to,” guard Avery Edwards said. “I feel like in this game we played how we wanted to play, did the things we wanted to do and put the things that we worked on into the game.”

Edwards paced the Crusaders with 17 points and three steals. She was 5 of 9 from beyond the arc.

Teammate Kendra Hicks was a monster in the interior, putting up 14 points, 17 rebounds and two blocks. Emma Sixta added 16 points and six rebounds.

“Defensively, we were a little too easy to beat tonight,” Lakeridge (4-2) head coach Jason Brown said. “We asked them to be tougher on defense, and we let them get into their spots way too easy. They got their rhythm going, and we had trouble coming back from it.”

Jesuit led 12-8 after a back-and-forth opening quarter. Edwards knocked down three three-pointers while Reese Ericson scored half of Lakeridge’s points and notched a highlight assist with a nifty behind-the-back pass to Keelie O’Hollaren for a transition layup.

Edwards’ fifth triple of the half put Jesuit up 23-12 late in the second period. The junior said fast shooting starts are always a nice confidence booster.

“For me, however the first few shots go is kind of how the game goes,” she said.

The Crusaders continued to pull away from there and headed to the locker room with a 30-16 advantage. Jesuit quickly extended its lead to 20 early in the third and never looked back.

Lakeridge is coming off a 13-2 spring season that included a first-place finish in the Culminating Week White Bracket.

“We definitely have some great pieces back,” Brown said. “We lost a lot defensively, which we’ve been trying to work on, but a lot of girls with very little or no varsity experience are stepping in to fill some holes that are pretty big shoes to fill.”

“Our chemistry is pretty good and we work well together,” she said. “It’s a pretty strong core that we have.”

Jesuit has played one of the state’s toughest schedules with road games against Barlow, Benson, Clackamas and 5A power Silverton.

Lowery sensed the team needed some time off after seven games in 17 days. The rest clearly benefited the Crusaders, who are looking to win their first Metro title since 2016.

“We really needed that break, but it’s good to be back,” he said. “I felt our girls looked a little bit more fresh and ready to go.”