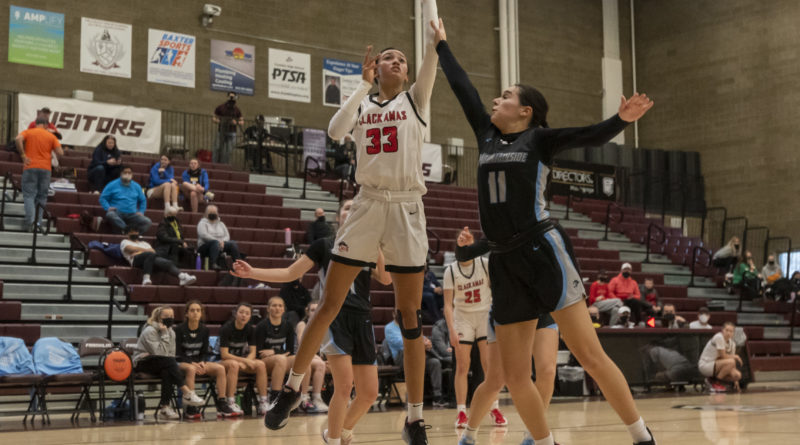 The majority of the state’s best girls basketball teams can be seen this week at Franklin, Grant and McDaniel high schools in Portland, including No. 1 Clackamas and second-ranked Beaverton. The three-day event began Tuesday.

In the second game of Tuesday’s action at Franklin, the freshmen-led Cavaliers raced by Mountainside, 70-37. Clackamas is scheduled to play No. 5 Benson at 8 p.m. Wednesday.

“I was glad that with the snow they didn’t cancel games. Unfortunately a few teams canceled due to COVID and whatnot, but I’m glad that we got the opportunity to play.”

Two of the late dropouts were Oregon Class 6A No. 3 South Medford and Southern California’s La Jolla Country Day, one of the top teams in the country. The cancellations forced tournament director Jeff Peeler to ditch the regular bracket format and find replacement teams.

But plenty of Class 6A state tournament hopefuls are still participating in the event, which began in 2017 with an eight-team varsity field. Along with Clackamas, Beaverton and Benson, top-10 teams Jesuit, Barlow, Lakeridge, Wells and Oregon City are in action at Franklin in what was previously labeled the Diamond Bracket.

“It’s really great playing against good competition, and the atmosphere in the gym is amazing,” Clackamas freshman Jazzy Davidson said. “It’s a really good atmosphere to play in.”

Added Mountainside head coach Glen Lee: “I’ve worked with Peeler before and he does a phenomenal job. This is a well-organized tournament and we’re just thankful to be a part of it.”

Costello, a first-year assistant at Clackamas, was in attendance for the last Holiday Classic in 2019 when Washington Class 1A Cashmere defeated Liberty, Beaverton and La Salle Prep en route to the title. Cashmere was led by McDonald’s All-American Hailey Van Lith, who is now at Louisville.

“The level of basketball in the states of Oregon, Washington and California is raising up,” Costello said. “So, to have a good tournament like this that people want to come to, it’s just awesome for us to go play some of those teams instead of just beating up on each other.”

Starting four freshmen, the Cavaliers (8-0) looked like a state title contender Tuesday in their rout of Mountainside. Davidson, a 6-foot-1 guard who already holds an offer from Stanford, shined with 25 points, seven rebounds, seven steals and four assists.

“Our goal today was really just to come out and have a lot of energy and set the tone for the game,” she said. “We need to clean up our turnovers, but overall I think we played pretty well.”

Clackamas built an early 12-2 lead with ferocious full-court pressure and later rattled off 20 consecutive second-quarter points to put it away. The Cavaliers got it done inside, outside and in transition.

“These girls, they can really pressure teams,” Costello said. “We are eight, nine, 10 deep at times, so a girl can go out there and play her heart out for three or four minutes. We’ve got great depth, and a lot of high school teams don’t have that.”

Lee was disappointed with the team’s execution following a lengthy layoff.

“We’ve got to come ready to play, and today we weren’t ready to play,” Lee said. “You could see it in their eyes. We didn’t have any practice time — Monday’s practice got canceled due to the snow — but when you’re a senior-dominated team, that shouldn’t be an excuse.

“We’re better than that, but all credit to Clackamas. They played hard, they played aggressive and were hitting on all cylinders.”