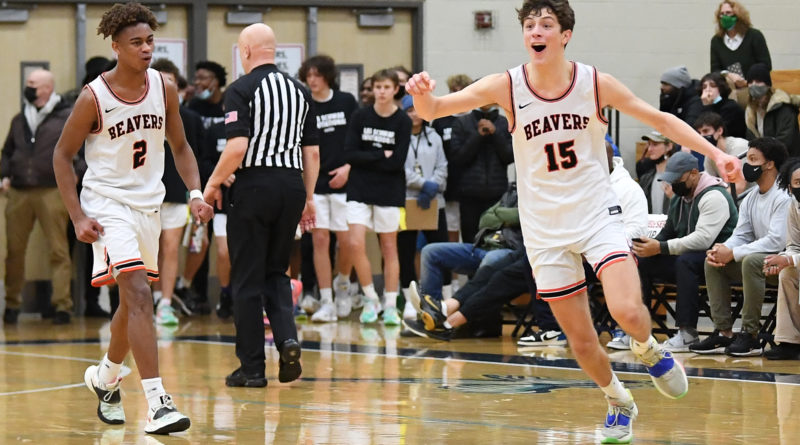 Beaverton is out to prove that its successful 2021 season wasn’t a flash in the pan.

Trailing by 16 points late in the third quarter and by double-digits for much of the fourth, the Beavers rallied back to stun Central Catholic, 54-52, in the opening round of the Les Schwab Invitational. Junior guard Brady Rice sank two free throws with 0.3 second remaining to seal the victory for Beaverton.

“We were down 15 with six minutes left, no shot clock, and we just stuck with it and pulled it out,” Rice said. “It feels pretty good.”

Despite the strong spring season and a perfect 15-0 record during the summer, the Beavers were unranked in the preseason coaches poll.

“I’m not going to say (our kids) got angry, but they’re looking at it and feel like we need to get our respect,” Vancil said. “We kind of use that as bulletin-board material, and absolutely these kids want to prove that it wasn’t just Dane Erikstrup, it was a program effort and it’s a thing you work on every day. There’s definitely an edge to them.”

Beaverton trailed Central Catholic (2-4) 21-20 at halftime but was outscored 18-6 in the third. To get back in it, the Beavers turned to a full-court press that generated multiple turnovers down the stretch.

Vancil said he waited until the second half to deploy the pressure package after watching his team wear down while playing four games in four days last week at the Capitol City Classic.

“By the last game, we had no energy, no gas,” he said. “Going into this tournament with our rotation, I knew that if we could play a little slow early in this game, that wasn’t the worst thing in the world.”

The Beavers scored nine straight points to pull even at 50-50 with one minute remaining. Rice converted a three-point play during the run and knocked down the tying shot from long range.

With about five seconds to play and the score knotted at 52-52, Central Catholic’s Riley Williams overshot an interior pass to 6-foot-8 forward Luke Johnson that caromed off the backboard. Philip Rosenfeld secured the rebound and fired an outlet pass to Rice, who caught the ball outside the three-point arc and sprinted to the hoop.

Jordan King went up to challenge Rice at the rim and was called for a foul with 0.3 second on the clock. Rice calmly sank the first free throw, made the second despite trying to miss, and Central Catholic’s last-ditch heave effort was unsuccessful.

“I was just running, looked up at the clock and saw two seconds, and I kept going down the floor,” Rice said of the game-winning play. “Credit to Philip, he had a great game.”

Rice led the Beavers with 22 points while Rosenfeld added 14 points and eight rebounds. Rice missed the final two games of the Capitol City Classic — Beaverton’s only losses of the season — with a back injury.

“My back’s a little messed up, but not too bad,” he said. “When the adrenaline is rushing like that, you can play through it.”

Johnson paced the Rams with 22 points and six rebounds. King had 13 points.

Vancil was happy with the way Beaverton competed on the glass against one of the state’s best frontcourts. The Rams did grab nine offensive boards but only won the rebounding battle 28-24.

“Central is a great team; they’re physical as hell and they’re one of the bigger teams we’re going to play,” Vancil said. “For us to rebound with them and just stay in the game, it was really good to see.”

Vancil praised sophomore Aiden Rice for playing big minutes in the second half. The younger Rice finished with five points, including a key three-pointer.

It’s a well-rounded roster for a program making its first LSI appearance since 2017.

“I have some good senior leaders in Keenan Apperson, Phil Rosenfeld and Trevon (Hamilton),” Vancil said. “They just keep fighting and fighting.”