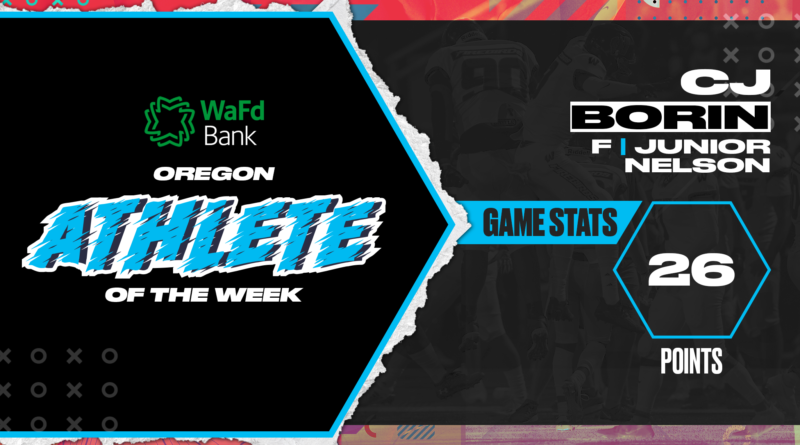 The junior had 26 points to lead the Hawks to a 64-48 victory over Milwaukie at Moda Center.

Borin received 57.63% of the vote, beating out Sprague’s Dallon Morgan, who finished second with 38.51%. St. Mary’s Academy’s Abby Graham finished third with 0.34% and Lincoln’s Moroni Seely-Roberts finished fourth with 0.27%. There were over 29,000 votes tallied this week!

Baylee Butler, West Salem girls basketball: Butler scored the winning basket to lift the Titans to a 31-29 victory at Sherwood, their first win of the season.

Odessa Gordon, South Albany girls wrestling:Gordon was the 125 pound champion at the Van Holstad Memorial Invitational, helping to lead the RedHawks to the team championship.

Terrence Hill, Roosevelt boys basketball: Hill, a 6-foot-3 sophomore guard, poured in 35 points to lead the Roughriders to a season-opening 74-65 win over Wells. Three nights later, he scored 23 in an 82-61 rout of Crescent Valley.

Sidney Jones, Aloha boys basketball: Jones had a game-high 16 points, including the winning basket, as the Warriors edged Liberty, 45-44.

Ginger Kiefer, Summit girls swimming: Kiefer was a winner in three events (500, 100 backstroke, 400 relay) to help power the Storm to the team title at the Bend Swim for Giving Meet. (Credit: Eric at Elite Oregon Girls)

TaKwain Montgomery, McDaniel boys basketball:Montgomery knocked down two clutch free throws with 1.3 seconds left to give the Mountain Lions a 51-50 win over Sunset.

Skyler Schmidt, Scappoose boys basketball:Schmidt, a 6-foot-8 junior, had 31 points and 10 rebounds to lead 5A Scappoose to a 75-63 win against 6A Century.

Moroni Seely-Roberts, Lincoln boys basketball: In a showdown with Cane Ridge of Tennessee, the 6-foot-6 junior went off for 38 points. Two nights earlier, he had a game-high 19 in a 66-38 win over Forest Grove. According to Prep Hoops Oregon, Seely-Roberts is fourth in 6A in scoring through Sunday at 25 points per game.