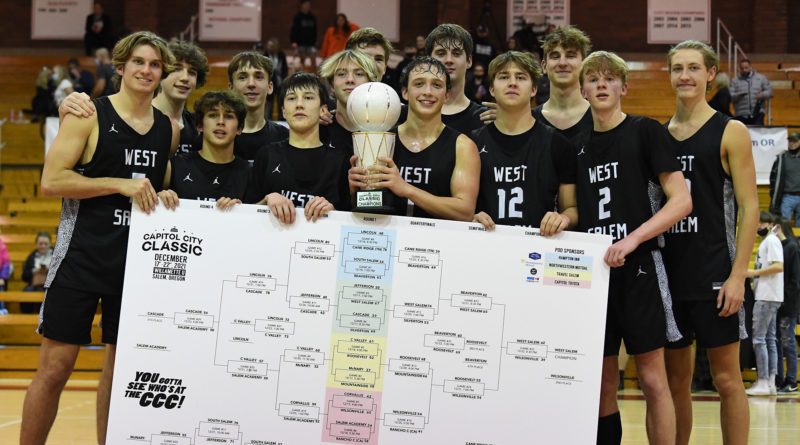 The West Salem boys basketball team has shown that it definitely has a flair for the dramatic.

West Salem has also shown that it has a penchant for rallying from behind, while also being able to step up in the clutch.

Now, the Titans have a tournament championship to show for it.

West Salem, one night after coming back from a 20-point deficit to top Beaverton in double overtime in a tournament semifinal, rallied from a five-point fourth-quarter deficit to get a dramatic 42-39 win over Wilsonville in the championship game of the Capitol City Classic on Wednesday at Willamette University in Salem.

“Back-to-back games going down to the wire — wow! We just had to pull through and fight hard,” West Salem senior guard Jon Breyman said as he held the tournament championship trophy. “It means a lot. We came out with a big ‘dub.’ I didn’t think we could do it, to be honest. But we played really good and we showed out.”

“We’re just super clutch,” said West Salem junior Tommy Slack, who had an assist, a basket and two crucial free throws in the decisive final few minutes. “We worked really hard for this, and we were able to pull it out.”

West Salem, which became the first team from Oregon to win the Capitol City Classic title in the five-year history of the event, improved to 6-1 on the season. The Titans also bested Jefferson and Silverton at the 16-team tournament before getting their final two dramatic victories.

“This will be a huge confidence-booster for us,” said Breyman, who scored a game-high 11 points in the title tilt. “We didn’t know that we were capable of doing this, but this shows that we’re not a team to mess with.”

Wilsonville, which entered the game ranked No. 2 in the Class 5A coaches poll, moved to 7-1 with its first loss of the season.

“It went pretty well, but not so well at the end,” said Wilsonville senior post Logan Thebiay, who had two dunks on his way to scoring a team-high 10 points. “The last five minutes, we kind of let them loose a little bit. But that’s OK. Stuff happens. We’ve been staying composed, playing well, moving the ball.”

West Salem, playing in front of a hometown crowd, got off to a strong start to the contest. The Titans held an 8-5 lead after Breyman sank two free throws with 2 minutes and 38 seconds left in the first quarter.

Wilsonville came back in the final minute of the period, getting a basket on a short-range bank shot by sophomore Kyle Counts and a last-second tip-in by Thebiay to take its first lead of the game, at 9-8, going to the second quarter.

The Titans, getting baskets from Slack and sophomore Connor Oertel, and a steal and layup by Breyman, regained the lead, 14-12, with 5:15 before halftime.

The Wildcats answered with a three-pointer by junior Tristan Davis, coming off a pass from Counts, giving Wilsonville a 15-14 advantage with 4:52 remaining in the second quarter.

The Wildcats took off from there.

Wilsonville junior Maxim Wu scored on back-to-back drives to the basket. Davis added a hoop on a baseline drive, and Thebiay went 2 for 2 from the free throw line, helping the Wildcats claim a 23-18 halftime lead.

Wilsonville kept rolling early in the third quarter, taking a 27-19 advantage — the biggest lead either team would hold in the contest — when the 6-foot-10 Thebiay put down a thunderous two-handed dunk, coming off a feed from senior Enzo Chimienti, with 6:58 left in the period.

“We moved the ball pretty well and took some good shots,” Thebiay said.

West Salem, with sophomore Trenton Ferguson scoring six points in the final 3:35 of the period, trimmed the margin to 35-30 going to the fourth quarter.

At that point, despite the five-point deficit, the Titans were confident going to the final stanza.

“We knew that our shots weren’t falling, all through the first, second and third quarters, and it was just a matter of time before our shots started falling,” Breyman said. “We knew that we’d start hitting those.”

Slack sank a short-range jumper off an assist by senior Brooks Ferguson, and Breyman connected on a three-point shot, trimming the deficit to 37-35 with 6:44 left.

The Titans took a 38-37 lead, their first lead since early in the second quarter, when sophomore Jackson Leach sank a three-pointer from the right wing, coming off a pass from Slack with 2:52 remaining.

Slack added a basket on a follow-up shot with 59 seconds to play, upping the West Salem lead to 40-37.

Wilsonville trimmed it to 40-39 when Wu made a pull-up 14-foot jumper with 27 seconds to play.

Slack was then fouled, sending him to the foul line in a one-and-one bonus situation with 11.7 seconds left. He calmly sank both of his free throws, giving West Salem a 42-39 advantage.

“You just have to stay calm, focus on your form, and take deep breaths,” Slack said. “After that first one went in, I knew I was making the second. I was confident.”

“He’s our clutch guy,” Breyman said of Slack. “It’s not his first time doing this for us. He’s clutch.”

Wilsonville’s last-second three-point attempt was short, leaving West Salem with a 42-39 win — and the tournament championship.

“This was so fun, and a good experience,” Breyman said.

Breyman, in addition to his game-high 11 points, had four rebounds, two assists and two steals, while also providing valuable leadership to the Titans.

“As a senior, I feel like I need to be a leader, especially for the sophomores and juniors,” he said.

West Salem made 17 of 43 shots from the field, with two three-pointers, and 6 of 10 free throw attempts. The Titans outrebounded Wilsonville 33-20.

“Hopefully, we can build off of this,” Slack said. “Maybe we can take it all the way to a state championship.”

“It means a lot,” Thebiay said of getting to the tournament championship game. “There are a bunch of great teams here, so it was great to win some games. This was a great tournament. I loved it.”

Wilsonville made 15 of 39 shots from the field, with two three-pointers, and 7 of 12 free throw attempts.

“We’re going to take a bunch of stuff from this game,” Thebiay said. “Don’t let up at the end, play hard every game.”

And, the Wildcats hope, lessons they learn in December will pay off later in the season, as they have some high aspirations.

“We’re looking pretty good this year,” Thebiay said. “Hopefully, we’re looking at state, but we don’t want to jinx anything, so knock on wood.”

Wilsonville defeated Corvallis, Rancho Christian, Calif., and Roosevelt, which is ranked No. 4 in the Class 6A coaches poll, on its way to earning a spot in the tournament championship game.