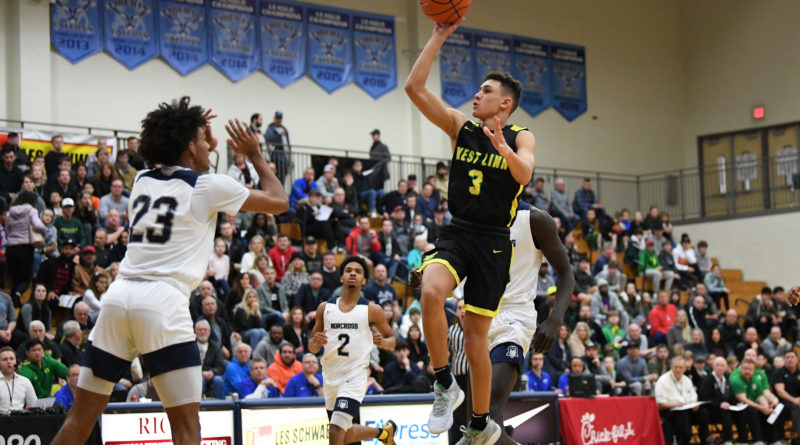 Link Academy from Missouri, Gonzaga College of Washington, D.C., and New Orleans’ Isidore Newman are the national powerhouses coming to the Portland area this month to compete with several of Oregon’s top boys basketball heavyweights — including West Linn, Grant, Jesuit, Central Catholic and Lake Oswego — at the 2021 Les Schwab Invitational.

The LSI will take place Dec. 26-30 at Liberty High School in Hillsboro. Tickets are available on the LSI website.

More than 30 LSI participants have gone on to play in the NBA. Here’s a look at several of the top players who will be competing in this year’s tournament.

The top-ranked recruit on Branson, Missouri, startup Link Academy, the 6-foot-8 Biliew is the class of 2023’s No. 7 overall prospect in the 247Sports composite rankings. The five-star big man holds numerous major offers.

The Brown twins have been varsity standouts at Tigard since their freshman season. Both 6-foot-1 guards can shoot, attack and defend at an elite level. Kalim is averaging 26.8 points per game as a junior.

The 6-foot-6 Clark was named MVP of this month’s Gonzaga DC Classic. The senior holds Division I offers from George Washington, Howard and Sienna.

The 6-foot-6 Cooper is one of the leaders of a talented junior class at Cleveland. The Warriors are looking to build off last season’s strong PIL season that included a victory over Jefferson.

Though undersized at 5-foot-10, Dinkins has elite quickness for the point guard position. The George Mason commit is rated No. 218 nationally for the class of 2022 in the 247Sports composite rankings.

Grady scored a game-high 16 points and added six rebounds and two blocks in a recent loss to 6A title contender Mountainside. The 6-foot-6 Grady is potentially the most talented freshman to enter Lake Oswego since Kevin Love.

The 6-foot-2 Hamilton is a pure point guard who led Class 6A in assists last season with six per game. As a senior, Hamilton has upped his scoring for Metro contender Beaverton.

Hill was a freshman phenom for the Roughriders last season, putting up 19.5 points per game for a team that finished atop the PIL standings. The 6-foot-3 Hill has Division I offers from Portland, Portland State and San Francisco.

A prolific all-around scorer, the 5-foot-8 Hills runs the show for Barlow. Hills put up 24 points in the Bruins’ opener against Wells and netted 25 points two days later in a win over Sherwood.

One of Oregon’s best big men, Johnson — also a star quarterback — skipped his senior football season to focus on basketball. The 6-foot-8 forward put up 24 points in Central Catholic’s opener. He holds a Division I offer from Bryant.

Lockett Jr. is an electric scorer who is likely to put on a show at Liberty High School. The 6-foot-5 junior, rated No. 49 nationally in the 247Sports composite rankings, holds several major offers, including Baylor, Kansas and LSU.

Though also a strong basketball player, Manning is more known for his football prowess. Nephew of Eli and Peyton, the 6-foot-4 Arch is the nation’s No. 1 overall football recruit for the class of 2023.

The Metro football defensive player of the year, Miller also is a star guard for the Crusaders. The 5-foot-11 senior recently picked up a football offer from Linfield.

An impact player since his freshman season, Morgan is one of the state’s best points guards. The 5-foot-8 standout averaged 20.5 points and six assists per game last season and holds a Division I offer from Bryant.

A Day 1 varsity star, Mosley is a do-everything junior guard who impressed at the 2019 Les Schwab Invitational. The 6-foot-2 Mosley is arguably the best player for state title contender Grant.

The 6-foot-2 Ogoli has opportunities to play football and basketball at the next level. Through four games this season, Ogoli was averaging 20.5 points.

The nation’s No. 14 overall prospect in the 247Sports composite rankings, Philips is an explosive athlete who can get to the rim with ease. The 6-foot-8 senior will play college basketball for LSU.

The reigning Mt. Hood player of the year, Pippa-White is an electric scorer who is averaging 22.5 points per game this season. The 6-foot-2 junior holds a Division I offer from Jackson State.

The 6-foot-10 Reed is an adept scorer at all three levels. A Michigan signee, Reed is a four-star recruit who checks in at No. 38 overall in the 247Sports composite rankings.

Ross is averaging nearly 20 points per game during his senior season. The 6-foot guard also is a star running back and recently picked up a Division I offer from Air Force.

The top recruit in Oregon for the class of 2022, Seamster is a three-star prospect who holds offers from San Francisco and Washington. The 6-foot-7 Seamster grew four inches last year and averaged 19.1 points per game as a junior.

Shelstad, an Oregon commit, is No. 68 nationally in the class of 2023 247Sports composite rankings. The 6-foot junior scored 31 points in West Linn’s season-opening win over Skyview.

A Northeastern commit, Turner is a 6-foot-8 wing who excels at shooting from long range. He is the nation’s No. 259 overall prospect in the 247Sports composite rankings for the class of 2022.

The 6-foot-2 Viuhkola is a strong outside shooter who holds offers from Bushnell and Corban. As a junior, Viuhkola averaged 17 points per game while shooting 46.2 percent from three-point range.

A two-star football prospect, von Arx is also an impact player on the basketball court for Grant. The 6-foot-5 senior has started for the Generals since his freshman season.

A five-star recruit and the nation’s 26th-best prospect in the 247Sports composite rankings, Walsh is a versatile athlete with plenty of length. The 6-foot-7 senior signed with Arkansas last month.