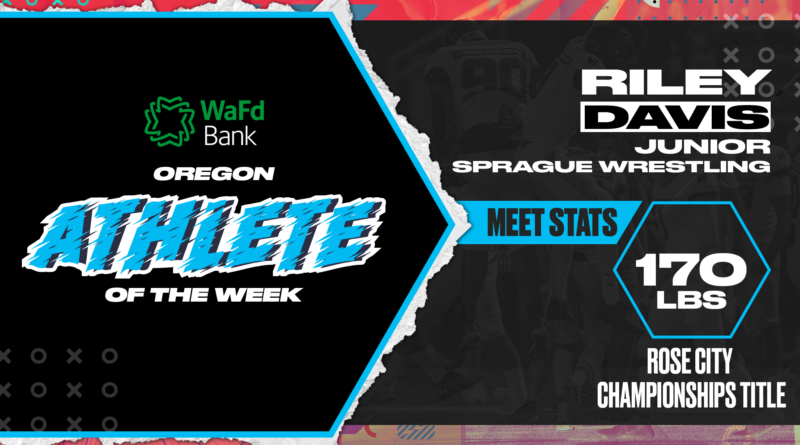 In one of the best matches at the Rose City Championships, the junior outlasted West Linn’s Justin Rademacher in overtime, taking the Lions junior down 34 seconds into the extra period for the victory in the 170-pound final.

Addyson Clark, Sutherlin girls basketball: Clark, a 6-foot-1 freshman, had a game-high 15 points as the Bulldogs improved to 4-0 by beating Phoenix, 50-20.

Riley Davis, Sprague wrestling: In one of the best matches at the Rose City Championships, Davis outlasted West Linn’s Justin Rademacher in overtime, taking the Lions junior down 34 seconds into the extra period for the victory in the 170-pound final.

Addison Dippel, Crater girls basketball: Dippel, a freshman, nailed five three-pointers and finished with a game-high 17 points to lead the Comets to a 54-23 win over Mazama. A night earlier, she had 15 points in a 45-34 victory at Hidden Valley.

Charlie Evans, Newberg wrestling: At the Rose City Championships, Evans won a matchup of state champions from different classifications as the two-time 6A champion edged 3A champion Michael Fox of Willamina 8-7 in the 160-pound final.

Connor Hills, Barlow boys basketball: Hills led the Bruins to a 76-50 win over Sherwood with a game-high 25 points.

Devon Malcolm, South Medford boys basketball:Malcolm put up 26 points and 22 rebounds to power the Panthers to a 69-54 win over Wells.

James Rowley, Crescent Valley wrestling: Rowley took second at the prestigious Walsh Ironman in Cuyahoga Falls, Ohio, one of the top high school tournaments in the nation. He lost 4-2 to Brody Conley of Tiffin (Ohio) Columbian in the 175-pound final.

Emma Sixta, Jesuit girls basketball: Sixta put up 27 points to help power the Crusaders to a 60-54 victory at Benson in a matchup of two of the state’s top teams.

Tommy Slack, West Salem boys basketball: Slack put up 28 points — including five three-pointers — as the Titans rolled to an 84-68 victory at Clackamas.

Lainey Spear, Beaverton girls basketball: Spear had a game-high 14 points — including four big ones in the final 2 minutes — as the Beavers defeated Barlow 39-28 in an early-season nonleague showdown.

Layne Stricker, Southridge boys basketball:Stricker’s 25 points helped the Skyhawks edge Glencoe for a 58-57 win. He had 27 points (five three-pointers) in a 77-68 loss to Canby.