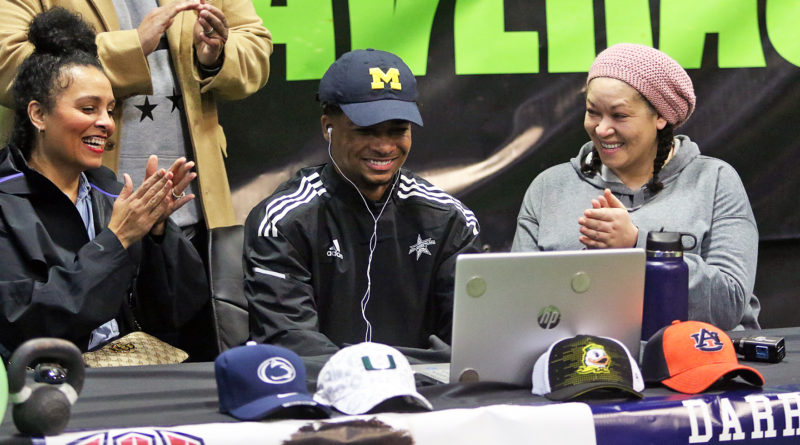 Some decisions are tough to make.

Some decisions are absolutely crucial.

Some decisions — even if it’s a situation where there’s no real bad decision you could make — can be excruciating.

Darrius Clemons knows all about that.

Clemons had quite the huge decision to make, and, when he did make that decision official, he was seemingly overcome with emotion, with joy, and with the promise of a very bright future.

Clemons, a Westview senior, made his decision to continue his scholastic football career at the University of Michigan, making that announcement in front of friends, family, teammates and coaches Wednesday at a ceremony at Grind Time Fit in Beaverton.

“It means a lot to me. It truly is a dream come true,” Clemons said after making his announcement. “Ever since I was a little kid, playing college football was something I dreamed of.”

With everyone waiting in anticipation, Clemons put the blue and maize Michigan cap on his head — to the loud applause of the gathering at Grind Time Fit.

“I made my decision at, like, 11:52,” Clemons said with a laugh. “It was probably the hardest decision I’ve made in my life. It came down to Michigan and Oregon. I’ve talked to both of their coaching staffs numerous times today. At the end of the day, I had to do what was best for me. I guess it was a selfish decision.”

“It’s all about Darrius and his family today, and all the hard work that he’s put in. It’s really fun to see his dreams come true,” Westview coach Ryan Atkinson said. “He has unbelievable work ethic. He’s been in the weight room since sixth grade, and he’s had a vision since sixth grade. He hasn’t really listened to a lot of outside noise. He’s just believed in it, went for it, and got it done.”

Clemons, who is the No. 131 overall prospect, No. 19 wide receiver nationally, and the No. 1 prospect in the state of Oregon, as ranked by 247Sports, is joining a Michigan team that is 12-1 this season and will face Georgia in the Orange Bowl (which also is a national championship semifinal contest) on Dec. 31.

But football success isn’t the main reason Clemons decided to join the Wolverines.

“It was academics, first and foremost,” Clemons said. “My family and I take that very seriously. On top of that, Michigan is a winning program. I’ll be part of the 1,000th win when I’m there. And there’s Coach (Jim) Harbaugh’s faith in me, and our faith in him.”

“Wherever he wants to go, I’ll be behind him,” Atkinson said. “It’s going to be fun to watch him.”

By the look of the enthusiastic crowd at Grind Time Fit, there’s going to be a lot of people watching Clemons.

“That means a lot,” Clemons said in regard to the people who were there to support him. “These are some of my favorite people on the planet — my best friends, my girlfriend, my family, and the people I’ve worked out with since eighth grade. It just means a lot to have them all here. All that time and effort culminated in this moment.”

For Clemons, it was an emotional moment.

“I can’t even find the words to describe how I was feeling,” he said. “I was nervous, sad, happy, excited — all of it. I’ll probably celebrate for the rest of today, but I’ll get back to work tomorrow.”

And Clemons is ready to get to work for Michigan — as soon as he can.

“I just need to continue working out,” Clemons said. “I’m going to enroll early, so I’ll be going to college in January. I think there’s an advantage in doing that. Hopefully, I can put my best foot forward and have a good career at Michigan.”

Atkinson doesn’t think that will be a problem.

“I see him doing very well,” the Westview coach said. “I see him going the distance, for sure. I think he’s an NFL-type player with his work ethic. I think he’ll get there.”

While the future might be bright for Clemons at Michigan — and maybe beyond — he finished his high school football career at Westview in a big way. In his senior season for the Wildcats, Clemons, in nine games, had 40 receptions for 890 yards (a 22.3 yards-per-catch average) and 12 touchdowns. He also had a kickoff return for a touchdown and a punt return for a touchdown.

Clemons was named the Metro League offensive player of the year and a first-team all-league pick at receiver as he helped Westview to a 9-2 record and a berth in the second round of the Class 6A state playoffs.

“He’s meant everything to us,” Atkinson said. “He’s everything you dream about. Most importantly, he’s one of the best people I’ve ever been around. He’s got a lot of people in his corner, because of the way he treats people. He just treats people with the utmost respect, and he’s humble.”

“It meant a lot. It was definitely the most fun I’ve had playing football in my life,” Clemons said about his time at Westview. “These guys are my best friends. I consider them my brothers. We didn’t go as far as we wanted to, but at the end of the day, those are moments I’ll never give back, and I’m very thankful for them. I think I put my all into that program, and they gave it all back to me. Thank you, Westview.”