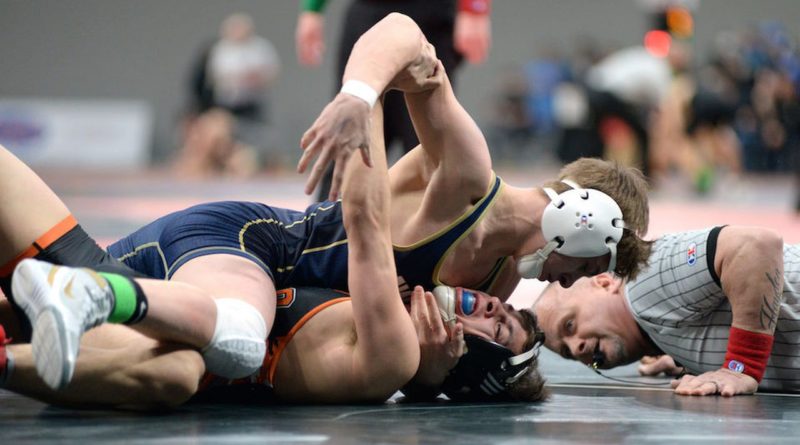 Over the next week, we’ll be taking a look at some of the state’s top returning wrestlers. Here’s our look at Class 3A. (Earlier: Class 6A | Class 5A | Class 4A)

There are hundreds of standout wrestlers in Oregon and these lists are not intended to be comprehensive. Let us know about other 3A wrestlers fans should know about this winter.

The past two years, only one wrestler has had Simmons’ number at the state tournament — Harrisburg’s Chandler Strauss, who beat him in the semifinals in 2020 and the 195-pound state final in June. With Strauss now wrestling at Clackamas CC, Simmons will be among the favorites at either 195 or 220.

Conrad came within one win of medaling at state as a sophomore, then came back last spring to reach the final at 170 before losing to La Pine’s Dominick Evans.

Greenlaw is a second-generation wrestler for the Bulldogs whose father, Adam, medaled at state in the 1990s and brother, Coty Brown, won state titles in 2013-14 before wrestling at Minot State. Greenlaw did not win a match in his first state appearance as a sophomore but made the most of his second, reaching the final at 220 before falling to Rainier’s Korbin Howell. “Corey is probably one of our most technical wrestlers and has the best personality,” Willamina coach Ariah Fasana said.

Bowlin is a three-time state placer who was fifth as a freshman, third as a sophomore and first at 182 in June, pinning Willamina’s Sprye Nelson with one second left.

Hankey is a three-time state qualifier and two-time medalist. He placed fourth as a sophomore, then bounced back from his first loss of the spring in the 182 semifinals to pin Joshua Niehusen of Warrenton in the medal round.

Mann reached the final in each of his first two seasons for the Hawks, losing each time to Willamina’s Moses Mercier. Mann moved up to 132 during the spring season and went 12-0, winning his first title by pinning Scio’s Hunter Zeiher in 1:35. “He will try to repeat as he dominated his weight class this past year,” La Pine coach Aaron Flack said.

Hendricks qualified for state each of his first two seasons at 106, going 1-2 as a freshman and reaching the final in June, where he lost to La Pine’s Tyson Flack.

Kemper has taken home medals from his first two state appearances, placing third as a freshman before going 22-2 and placing second last spring, losing to Rainier’s Brandon Isaacson 11-6 in the final.

O’Connor reached the state semifinals in each of his first two seasons, placing sixth as a freshman and falling one spot short of the podium as a sophomore. He got past the semifinals in June but lost in the 138 final to Dayton’s Tony Cisneros.

Larsen is a three-time state qualifier who finally made the podium during the spring season, reaching the 145 final before losing to Burns’ Kevin Peasley 3-0.

Peasley had been a hard-luck wrestler at state each of his first two seasons, placing sixth as a freshman and coming up one round short of the medals as a sophomore. It all came together for him during the spring season, when he went 17-3 and won the state title at 145 with a 3-0 decision over Dayton’s Jim Larsen.

Fox is a three-time state finalist who finally broke through for his first championship in June, pinning Vale’s Ronnie Norton 40 seconds into the second round to cap an undefeated season. When he’s not bagging titles on the mat, he’s tagging deer and elk as an accomplished hunter.

Barnes won a state title as a sophomore at 106 pounds, then took last season off because of the pandemic. He’s back this season and wrestled at 132 in the season-opening Woodfin-Robinson Tournament.

Norton did not win a match at state in his first two appearances, but his luck turned in June, when he reached the final at 160 before losing to Willamina’s Michael Fox.

Nelson improved upon his fourth-place state finish as a sophomore by taking second at 182 in the spring, losing to Dayton’s David Bowlin in the final. Bulldogs coach Ariah Fasana admires Nelson’s perseverance in the sport. “He struggled his first couple of years, going winless, but stuck with it and has continued to improve every year,” Fasana said. “He has become more athletic, and success has followed.”

Cisneros has steadily climbed the podium during his career, placing third as a freshman and second as a sophomore before capping an undefeated junior season with a second-round pin of Pleasant Hill’s Jackson O’Connor in the 138 final in June.

Olson has reached the state semifinals each of the past two seasons, finally standing on the podium in June with a third-place finish at 220.

Flack was an undersized wrestler even at 106, the lightest weight in the lineup, but he came up big at the state meet in June, besting Rainier’s Hunter Hendricks 5-0 in the final to kick off the Hawks’ title run. His coach and father, Aaron, said “Tyson finally broke 100 pounds, and expectations are high as he tries to repeat at 106.”