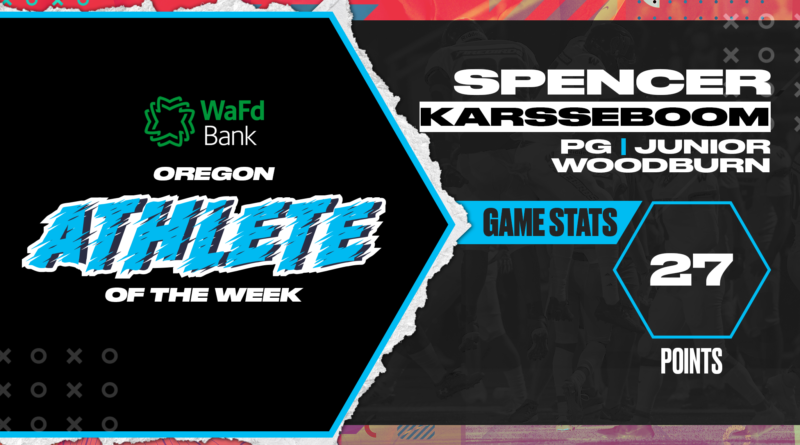 The junior’s 27 points helped the Bulldogs edge South Albany for a season-opening 61-59 victory.

Karsseboom received 37.44% of the vote, beating out Lebanon’s Henry Pointer, who finished second with 29.23%. Clackamas’ Jazzy Davidson finished third with 12.31% and Summit’s Caden Harris finished fourth with 9.43%. There were over 53,000 votes tallied this week!

Kalim Brown, Tigard boys basketball: Brown made 14 of 18 shots from the field and finished with 34 points in the Tigers’ 82-43 rout of Aloha.

Malik Brown, Tigard boys basketball: Brown had 20 points and six assists in a 77-44 victory against David Douglas and 19 points, eight rebounds and seven assists in an 82-43 win over Aloha.

Dimitri Cohen, Mountainside boys basketball: Cohen had a game-high 20 points, including a winning three-pointer with 10 seconds left, to lift the Mavericks over Benson, 49-46.

Isaiah Crane, Jesuit boys basketball: Crane had 21 points to help lead the Crusaders to a 59-55 victory at Clackamas and a 2-0 start.

Shuaib Dahir, Wells boys basketball: Dahir led the Guardians to an 86-65 win over Southridge with 22 points and 12 rebounds.

Jazzy Davidson, Clackamas girls basketball:Davidson, a 6-foot-1 freshman, had 23 points in her first high school game, a 61-40 win over Washougal. The next night, she had 24 points, 12 rebounds and nine blocked shots as the Cavaliers defeated South Medford 58-56 in overtime.

Alex Evans, Canby boys basketball: Evans drilled eight three-pointers and finished with 25 points to lead the Cougars to an 82-58 win against Sandy.

Caden Harris, Summit boys basketball: Harris went off for a program-record 40 points in the Storm’s 93-55 victory against Dallas. He also pulled down 15 rebounds. A night earlier, he had 26 points in a 79-40 rout of Crook County.

Boden Howell, South Medford boys basketball:Howell, a 6-foot-3 freshman, had a game-high 17 points in the Panthers’ 87-38 win over Glencoe.

Donovyn Hunter, South Medford girls basketball:Hunter had 35 points in the Panthers’ 81-43 season-opening win over St. Mary’s Academy. Against Clackamas the next day, she had 19 points, nine rebounds and three steals, but the Panthers lost 58-56.

Gavin Jackson, Central Catholic football: Jackson tied for the game high with eight tackles and forced a key fumble in the Rams’ 6A title-clinching 44-14 victory against Tualatin. (STORY, PHOTOS)

Timmy Mitchell, Central Catholic football: Mitchell returned a fumble 27 yards for a touchdown, was in on eight tackles and recorded three pass breakups in the Rams’ 6A title-clinching 44-14 victory against Tualatin. (STORY, PHOTOS)

Henry Pointer, Lebanon boys basketball: Pointer had 35 points and 11 rebounds to lead Lebanon to a 58-50 win over Hillsboro.

Brady Rice, Beaverton boys basketball: Rice had a game-high 29 points to power the Beavers to a 57-53 season-opening win against North Medford.

Emar’rion Winston, Central Catholic football: Winston opened the scoring in the 6A title game by returning a fumble 58 yards for a touchdown. He was in on six tackles — one for loss — as the Rams beat Tualatin, 44-14. (STORY, PHOTOS)