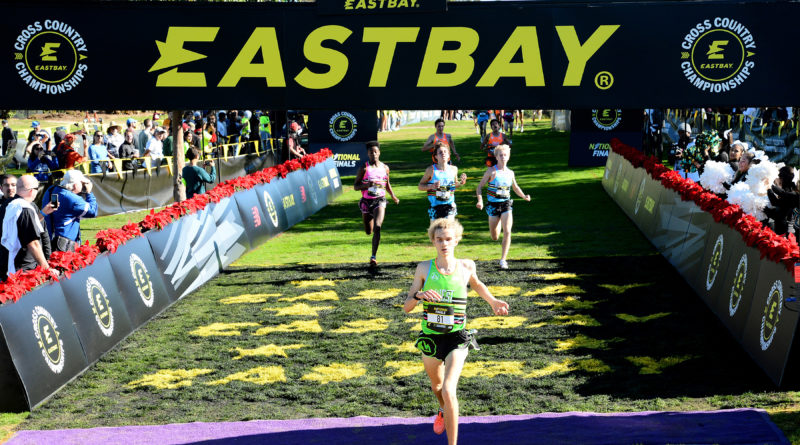 By René Ferrán | Photos by Photorun.net for Eastbay Cross Country

“We are all really close, and that helps us all to run strong,” Maiorano said.

The West Region champion a week ago posted the best finish by an Oregon girl at the national championships in nearly a quarter century — La Grande’s Mariel Ettinger placed second at the Foot Locker National Finals in 1997.

Gorze’s finish is the best by an Oregon boy since Summit’s Matthew Maton took third in 2013.

“This season has been really successful, and it was great to see how all my hard work paid off,” Gorze said. “It was cool to come to Eastbay and race some of the top guys in the nation and see how I matched up with them.”

Gorze, who won the West Regional race last weekend, went out with the lead pack of six runners for the first half of the race. He eventually finished in 15:26.4, 15 seconds behind winner Riley Hough of Hartland High in Fenton, Mich.

“It was a great race,” Gorze said. “I felt I was right where I needed to be most of the race. I knew the guy (Kenan Pala of San Diego) from the West in that pack, so I felt comfortable. I tried to stick with that lead pack for as long as I could, but the second time around, I lost contact going up the hill.”

Maiorano, a recent Gonzaga signee who was eighth at the 6A state meet last month in Eugene, and North are good friends who decided together on a conservative strategy for Saturday’s race.

“I knew it was going to go out really hard, because there were a lot of elite runners here, and I didn’t want to go out super aggressive because I knew a lot of people would fade,” North said.

Maiorano acknowledged being a bit nervous when he finished the first loop in 30th place, and as he approached a steep downhill portion of the course with a half-mile to go, he still was well out of the top 15.

As he surged down the hill, he started picking off runners one by one — including his buddy, North — and crossed the line in 15:33.7, less than a second ahead of North.

“I’m not really known as a fast finisher, so I’m really satisfied with that finish,” Maiorano said.

North edged Sahli Dodda of Dallas, Texas, by three-tenths of a second to snatch the final All-America spot in 15:34.6.

“The goal was definitely to get as close as I could to the top 10,” North said. “I was able to pass a few people the second half of the race, and I feel good about that.”

North also enjoyed getting to spend the week in Southern California with Lightning teammate Kaiya Robertson, who narrowly missed the All-America positions in the girls race with a 16th-place finish.

“She really brought the hammer on that second lap,” North said. “It means so much for our program having the two of us here. It also meant a lot to me to have a teammate here. It was so much fun, and at the end of the day, I was super happy to be here.”

Also running for the West team was Tualatin senior Caleb Lakeman, who finished 40th in 16:27.1.

Lakeman, who will sign with Georgetown this month, considered himself more of a track runner coming into the cross country season and surprised himself a bit when he qualified at last weekend’s West Regional with a ninth-place finish.

“I was definitely hoping to place a lot higher and be up with the other Oregon boys,” said Lakeman, who was fifth at the 6A state meet. “It was a really long season. My training was geared toward state, and I may have peaked a little early. I’m a little fatigued mentally and physically, but this was a really great opportunity, and despite my placement here, I’m happy with my season as a whole.”