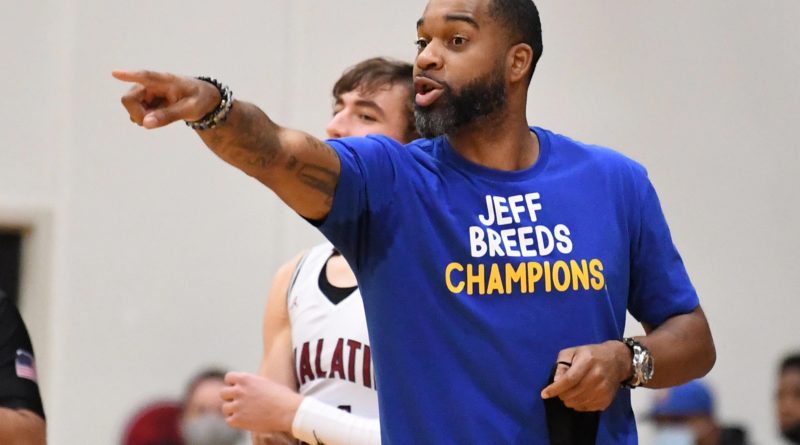 Gardner has immense respect for the rich history of Jefferson basketball and the coaches who came before him, but he says he plans to build “a better culture overall” within the Democrats program and community

Thomas Gardner transferred to Jefferson High in the summer of 2000 to play for coach Marshall Haskins.

Twenty-one years later, the former NBA player is back at his alma mater as the Democrats’ fourth head boys basketball coach in the past 46 years.

“I’m just honored to be the head coach at one of the best basketball schools in Oregon history, and I understand that I’m here for a purpose bigger than basketball. A lot will be put on what my varsity team does, but to me that’s secondary to building a better culture overall at Jefferson and in the community.”

Gardner has immense respect for the rich history of Jefferson basketball — a nine-time state champion — and the coaches who came before him.

Pat Strickland went 274-71 and won five state titles in 13 seasons at the helm. Strickland, who stepped down in August, coached Gardner in AAU and junior varsity at Jefferson.

“Early on in his childhood and throughout high school, Thomas was always a great kid and a good student,” Strickland said. “Not only a good student academically, but a student of the game of basketball. He’s a friendly guy and very competitive, and he’s carried all of those attributes into adulthood.”

Before Strickland, Haskins went 237-40 in 10 years with two state titles. Bobby Harris preceded Haskins and went 391-163 in his 22 seasons as head coach.

The stability of Jefferson’s program made the position that much more appealing to Gardner.

“This isn’t the kind of job that opens up often,” Gardner said. “I have the support of lots of former players, which means the most to me, as well as Pat and Marshall. I’ve felt the love … and it just feels good to be home.”

Gardner’s coaching journey began nearly a decade ago in California. He coached freshman ball in Modesto and worked as a skills trainer.

“They kept trying to bring me girls, and I was like, ‘No, girls basketball is boring!’” Gardner said. “And there was one parent who kept asking me every week, so I finally said, ‘OK.’ She brought her daughter, and the next week the daughter brought five friends with her. And in three weeks, I had 15 girls in the gym.”

“They go home and work on the things you ask them to,” Gardner said. “They don’t rely as much on athleticism, so they play the game the right way. Coaching girls and three-, four- and five-year-olds helped me work on my patience and gave me an opportunity to see the game better because there are no alley-oop plays, fast-break dunks, none of that stuff. It let me hone in on my coaching skills, my Xs and Os.”

Gardner now runs AAU club Portland Supreme and is a youth development coach for the Portland Trail Blazers. He accepted the De La Salle North girls job to get much-needed coaching experience at the varsity level.

In two years at De La Salle North, Gardner went 20-16 with a 3A state postseason appearance. Chevelle Boyd was the 2020 Lewis and Clark League player of the year and is on scholarship at Central Wyoming College.

“The reason I took the De La Salle job was to prove to people that I could actually coach,” Gardner said. “That was an important steppingstone to get my foot in the door.”

When news of Strickland’s retirement surfaced, Gardner said his phone immediately blew up. Members of the Jefferson community wanted to know if Gardner was going to apply.

“In the beginning, I had to really sit and think about it because I had built something at De La Salle,” Gardner said. “I knew this year was going to be my best team, so I was really torn.”

“Everybody said, ‘Thomas, this is bigger than basketball. If not you, who?,’” Gardner said. “So, I thought about it some more, and I think it was Dwight who told me this. He said, ‘Thomas, these boys need fathers, and some of them don’t have their dads. You can be a big role model and bring that sense of community back and give these kids something they can look to and relate to.”

Gardner applied and interviewed for the opening. It took a few weeks, but he was eventually offered the job.

Strickland said he talked with Gardner and two other top candidates during the coaching search. He believes Gardner is the right man to follow in his footsteps.

“Thomas is engaged in the community … and one big reason why I’m excited about him being at Jeff is that he’s a young guy with lots of energy,” Strickland said. “That’s what Jeff basketball needed. He can keep it going and keep it moving. I think he’s going to do a good job.”

Gardner wrote about reshaping the school’s culture in a Facebook post after accepting the job in October. He said he received a few messages questioning if the line was a shot at Strickland.

“People can take my statement as disrespect of what Pat did, but it’s not,” Gardner said. “We’re on the same page and I’ve been in a good place with him. … In fact, I just talked to Pat (last week). He wished me well for our event last Saturday and said he would’ve been there if he wasn’t in Los Angeles.”

Jefferson opened its season Wednesday with a 90-30 loss at Tualatin before facing Camas on Friday in its home opener. The Democrats have a roster full of varsity newcomers, but Gardner is excited to get things going in his return to Jefferson.

“I think our biggest advantage this year is being an unknown,” Gardner said. “Can Thomas Gardner coach? What does Jefferson look like when they lose the Gatorade player of the year (Lamar Washington) and Mookie Cook? It’s going to be hard to scout us because you don’t know what’s coming, and I kind of like that. We are underdogs and we have to prove ourselves, and I have to prove it as a coach. We have to earn respect.”

More photos from Jefferson at Tualatin …