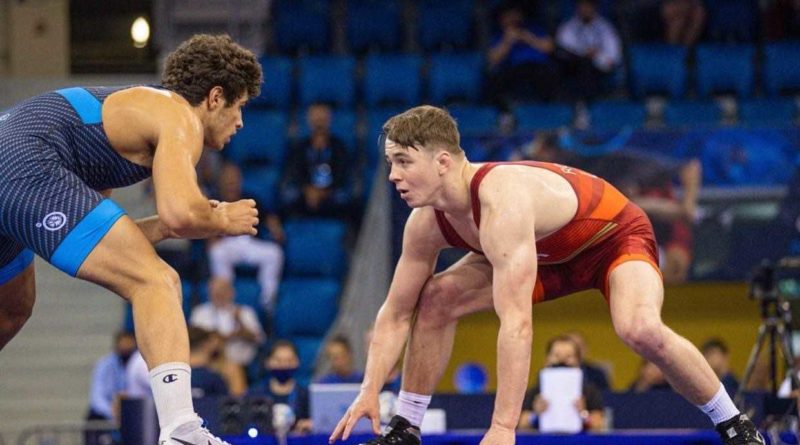 Over the next week, we’ll be taking a look at some of the state’s top returning wrestlers. Here’s our look at Class 5A. (Earlier: Class 6A)

There are hundreds of standout wrestlers in Oregon and these lists are not intended to be comprehensive. Let us know about other 5A wrestlers fans should know about this winter.

Peraza-Nava is a three-time state qualifier and two-time medalist, taking sixth as a sophomore and third last season at 170 to complete a 13-2 season.

Ruchti, the younger brother of two-time state champion and Oregon State freshman Asher Ruchti, has placed twice at state in his own right, taking fifth as a freshman and second to Eagle Point’s Tygren Lopez at 113 in June. “Braylin is a very disciplined, hard-working wrestler and a real student of the sport,” Colts coach Mike Simons said. “He will make a strong run at winning a state title this year.”

Indell is better-known for his play on the gridiron as a two-way standout for the Colts during their run to a third consecutive state final, but he finally made his mark on the mats as a Willamette junior during the spring, going 17-4 and finishing second at state at 195 to two-time champion Hayden Walters of Crescent Valley. Colts coach Mike Simons is well-acquainted with his former Midwestern district rival. “I have seen him wrestle many times, and he has improved each season,” Simons said. “He’s an all-state football player, and that toughness carries over to his wrestling.”

Wells kicked off his career with a third-place state finish as a freshman, then came back last spring and knocked off unbeaten NWOC district champion Narcizo Garza of St. Helens 10-2 to win the 132 state title. Cowboys coach Jake Gonzales said that “toughness is the first thing that comes to mind when I think of Cash. He has developed not only as a wrestler, but also as a young man, and we’re excited to have him back for next year as well.”

The youngest of the five Lamer brothers is halfway to joining Legend (Cal Poly) and Chance (Michigan) as four-time state champions after pinning Central’s Ethan Dunigan in the first period of their 145 state final in June. He earned All-America honors with a runner-up finish at 160 in the 16U Freestyle division at Fargo Nationals, and last month, he won the 165 title at the Mike Clock Open in Forest Grove, beating Oregon State freshman and former Iowa state champion Graham Gambrall in the final. “Daschle heads into the season with a lot of momentum,” said his coach and father, Chad. “He needs to get on the podium at the big tournaments, and he is looking poised to do that.”

Tremper had a rough freshman season, finishing 17-24 and failing to win a match at the Intermountain district meet. He came back last season with a vengeance, going 13-3, winning the IMC title and placing second at state to Crescent Valley’s Everest Sutton.

Gillett is one of three Raiders juniors who won a second consecutive state championship at Cottage Grove, both times beating Crook County’s Tucker Bonner in the final — at 106 as a freshman and at 120 in June with a 15-2 major decision. He beat teammate Gabe Whisenhunt in the consolation rounds at Super 32 and entered the national rankings at No. 15 at 126 pounds. Crescent Valley coach Chad Lamer noted how Gillett “has really taken a jump this preseason,” and he’s looking forward to seeing how Gillett performs at high-level events such as the Reno Tournament of Champions, Doc Buchanan and Ironman.

Dunigan went 13-0 against wrestlers not wearing a Crescent Valley singlet last spring but 0-3 against the Raiders, eventually losing to four-time champion Chance Lamer in the state final.

Sutton didn’t get much prep time during the abbreviated spring season before arriving at Cottage Grove, but he left as a state champion at 106, pinning Pendleton’s Dawson Tremper in the second round of the final. He won two matches in the 16U Greco Roman division at Fargo Nationals and placed sixth at 106 at the Freak Show tournament in Las Vegas. “Everest had a great start to his high school career,” said Raiders coach Chad Lamer. “I am looking forward to seeing how his sophomore year goes.”

Whisenhunt’s father, Josh, wrestled at Oregon State, and his mother, Bea, was a Beavers gymnast, so it’s not much of a surprise that he signed with OSU last month. He’s a three-time state champion and 2021 Fargo Nationals All-American (fourth at 126 in the Junior Freestyle division) with an 108-6 career record for the Raiders, and he’s ranked No. 4 by WIN Magazine, No. 14 by FloWrestling and No. 5 by The Open Mat entering his senior season. “Even though he’s a man of limited words, when he speaks, people listen,” OSU coach Chris Pendleton said after Whisenhunt’s signing. “I hope his leadership will continue to flourish and he grows within our program.”

Walters is a two-time state champion who’s set to become the next great Raiders wrestler. He finished third at Fargo Nationals in the 182 Junior Freestyle division in July, took fifth at the Super 32 in October, and finds himself on all the national rankings lists — No. 5 by The Open Mat, No. 9 by FloWrestling and No. 7 by WIN Magazine. “He just keeps getting better,” said Crescent Valley coach Chad Lamer.

Harwood has a collection of three medals from the state championships, taking home a sixth-place medal as a freshman, a third as a sophomore and a silver medal for placing second in June to Crescent Valley’s Daschle Lamer. “Hunter is an extremely talented and hard-working wrestler,” Colts coach Mike Simons said. “He has consistently improved each season, and he is a leader on our team and very committed to becoming a state champion.”

Rowley is the most decorated wrestler in the state this winter. Besides having the chance to become a four-time state champion after earning his third title in June at 182, he spent his summer winning a silver medal at 80 kilograms at the Cadet World Championships in Budapest, Hungary — the best finish ever by an Oregon wrestler at the event — adding it to the bronze he won at the U15 World Championships two years ago. He signed with the University of Wisconsin last month and enters his final season with a 99-8 career record, ranked No. 5 nationally at 170 by FloWrestling and No. 3 by The Open Mat, and No. 6 at 182 by WIN Magazine. “James will look to continue to dominate and place really high at our big tournaments that we go to,” Raiders coach Chad Lamer said.

Jordahl is a two-time state finalist and three-time placer, finishing fourth in the spring with a 20-3 record. He’ll be counted upon to be a leader for the Comets as they look to return to the podium as a team.

Downing is the leading returner for a Panthers team that placed fourth at state in June — its best finish since 2017. He went 17-2 for the season and placed third at 138, adding to the fourth-place medal he took home as a freshman in 2020.

Malone went 49-7 as a freshman, winning three tournament titles and finishing second to Crescent Valley’s Daschle Lamer in the 120 state final. He missed last season recovering from shoulder surgery, but Colts coach Mike Simons said he’s 100% healthy entering the season. “He is one of the most technical athletes to come through the Thurston program,” Simons said. “He is very disciplined and dedicated. He will make a strong run at a state championship this season.”

Garza came close to ending the Lions’ titleless streak that dates to 2017, taking an undefeated record to the 132 final in June before losing 10-2 to Crook County’s Cash Wells. It was Garza’s first podium finish in three trips to the state tournament.

Solis has been a solid program wrestler during his career, but he really broke through as a junior, going 15-2 and placing third in a loaded 185 bracket that featured three-time state champion James Rowley and two-time champion Asher Ruchti. He avenged a loss to Cowboys teammate Benjamin Sather in the IMC district final, pinning Sather in 5:46 in the medal round at state. “Ray has developed through the program and had a great state tournament,” said Crook County coach Jake Gonzales. “He’s just a hard-working kid who is committed to the program.”

Godek experienced a huge growth spurt between his sophomore and junior seasons. He was stuck behind state champions Legend Lamer and James Rowley as a freshman, then wrestled at 152 behind Tyson Resko as a sophomore. He bulked up and wrestled at 285 during the spring season and came away a state champion, beating Silverton’s Owen Magill 3-2 in the final. “Riley is an absolute workhorse and gets so much out of each workout,” Raiders coach Chad Lamer said. “He is improving daily, and I’m looking for him to get a bunch of wins and sneak onto the podium at those big tournaments.”

Bonner has been a workhorse for the Cowboys each of the past three seasons, placing third at state as a freshman and finishing second the past two years to Crescent Valley’s DJ Gillett. “He’s an athlete that has put a lot of time into the sport, and you are seeing the fruits of his labor,” Crook County coach Jake Gonzales said. “He’s a great kid, and I’m looking forward to his senior season and what the future holds for Tucker.”

Lopez became the first Eagles boy to win a state title in the past six seasons, avenging a loss to Thurston’s Braylin Ruchti in the Midwestern district final with an 11-8 decision in the 113 state final to finish his freshman season 14-1.

Halstead’s future lies on the gridiron, where he’s a standout linebacker for the Colts, but he has college-level wrestling ability, as evidenced by a sophomore season in which he finished second at state at 220 behind unbeaten Redmond senior Austin Carter. Halstead then went to Fargo Nationals and placed fourth in the 16U Greco-Roman division at 220 to earn All-America honors. “Vaun has put in a lot of extra time on the mat the last couple of years, and it will continue to pay off for him,” Thurston coach Mike Simons said.