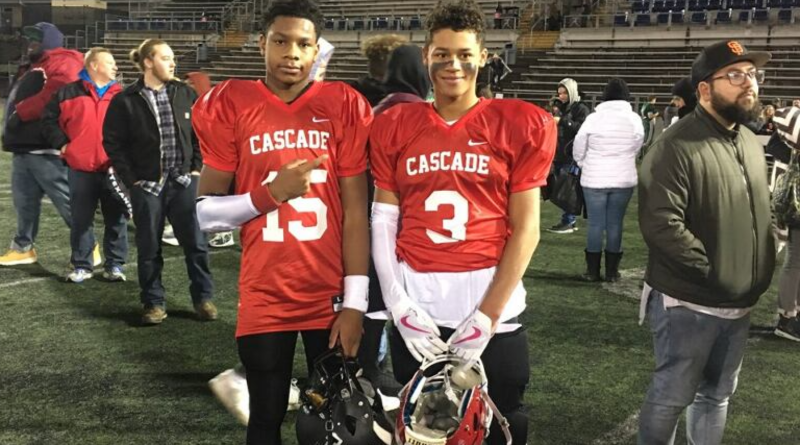 Ross gained a game-high 175 yards on 25 carries. Jackson made eight tackles — and his Rams got the win.

But they spent a lot of time growing up together, with football being a focal point, and they’re about as close of friends as could be.

On Saturday, however, they found themselves on different sidelines, and staring at each other across the line of scrimmage.

Jackson, a Central Catholic senior linebacker, and Ross, a Tualatin senior running back/defensive back, and their respective teammates met Saturday in the Class 6A football state championship game, which was held under rainy conditions at Hillsboro Stadium.

“It’s just another football game. It’s two good teams battling against each other,” Ross said after the contest. “The only thing is, the winner gets a trophy. It’s just a regular game, with two friends going at it.”

As much as Ross might have wanted to downplay the matchup between friends, both Jackson and Ross seemed to be plenty motivated, and they both seemed to have plenty to be proud of after the game.

“It was definitely motivation on the field,” Jackson said of the matchup between friends.

Ross had a spectacular game running the ball for Tualatin. He gained a game-high 175 yards on 25 carries and scored on a 15-yard run with 4 minutes and 31 seconds left in the second quarter.

Jackson might very well get to claim the most important bragging rights, as his Central Catholic squad scored a 44-14 win over the Timberwolves, giving the Rams their second consecutive state championship.

“This was fun. It was crazy,” Jackson said during the Central Catholic victory celebration.

Jackson did his part for the Rams’ impressive defensive performance in the win. He was in on eight total tackles (three solo tackles, five assists), tying him for the team lead, and he forced a fumble that sophomore Timmy Mitchell returned 27 yards for a touchdown, giving Central Catholic a 21-7 lead at that point.

Three times in the game, Jackson was involved in tackles on Ross, including a solo tackle following a 3-yard gain by Ross early in the second quarter.

“It was fun,” Jackson said. “It got competitive at some points, but it was fun.”

‘This team has just been something special.’ Central Catholic leaves no doubt in 6A title-clinching rout of Tualatin

‘I’m going to be friends with these dudes for the rest of my life.’ Tualatin lost a game, but Timberwolves will keep their brotherhood forever

Best defense in Central Catholic history? That unit ‘came out like dogs,’ states its case in dominant win over Tualatin in 6A final

‘I’ve got your back and you’ve got mine.’ Central Catholic offense plays for each other in 2nd half of title tilt, and that approach carries Rams to another state title

A.J. Noland carries on family sports tradition at Tualatin: ‘The Tualatin community means everything to us’