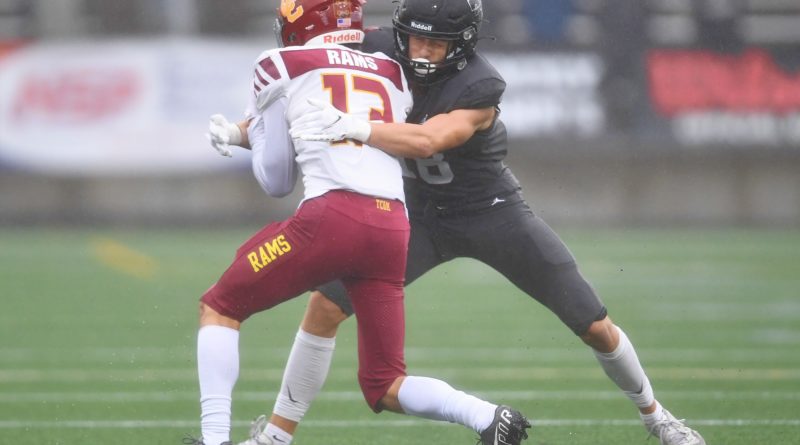 They all just seem to go together. Actually, you can add one more item to the list — family.

For Tualatin sophomore A.J. Noland, they all certainly are joined together, especially the Tualatin and the family parts.

“The Tualatin community means everything to us,” Noland said Saturday after playing for the Timberwolves in the Class 6A state championship football game at Hillsboro Stadium. “They’ve been there from Lucas, to Sam, to me. They’ve always helped all of us.”

By ‘us,’ Noland means his family, including his parents, Troy and Pam Noland, and his older brothers, Lucas and Sam.

“For me, growing up watching them, I knew this was the high school I’d be playing for, and I knew how much the Tualatin community was into it, and how much the coaches took care of the kids,” the youngest Noland said. “It just means the world to my family.”

Oldest brother Lucas Noland, a 2018 graduate, was a football and basketball standout for the Timberwolves. For the Tualatin football team, he was a hard-running running back and a hard-hitting defensive back. As a senior, he was an all-Three Rivers League first-team pick as a safety. He also earned Class 6A all-state honorable mention accolades.

During basketball season, Lucas Noland played guard for the Timberwolves and served as a defensive stopper. He was an honorable mention all-league pick as a senior.

Lucas Noland went on to play football at the University of Oregon as a preferred walk-on, mainly seeing action on special teams. As a freshman for the Ducks, Noland was named the team’s offensive scout team player of the year. This year, as a 6-foot-1, 194-pound safety, Noland has played in all 13 of Oregon’s games, and he has been in on six tackles, including one solo tackle.

Sam Noland, a 2020 Tualatin graduate, was a standout guard for the Timberwolves basketball squad. An offensive threat, either driving to the basket or shooting from the perimeter, Noland was an all-Three Rivers League second-team selection as a senior.

Sam Noland has gone on to play college basketball at Pacific Lutheran University in Tacoma, Wash. The 6-0, 175-pound Noland has started at guard all seven of the Lutes’ games this season, helping PLU get off to a 5-2 start. Through Saturday, he was averaging 10.9 points per game, third-best on the team.

“I’m the last one. I’m the youngest. I can’t imagine anything else,” he said. “With Lucas and I playing football, he’s always helped me. Sam didn’t play football, but he’s always been there, helping me the whole way. During quarantine, I wouldn’t be here without them. No way. Lucas has always been there, pushing me. And going straight to basketball, Sam is a really good basketball player, and he’s helped me with that. Along the way, with whatever problems I’ve had, they’ve always been here to keep me going, pushing me to be my best.”

A.J. Noland (6-1, 170) got his varsity football career at Tualatin off to a strong start, as he started at free safety for the Timberwolves this season as a sophomore and got playing time at receiver, helping the Timberwolves to a 12-2 record. Noland earned second-team all-Three Rivers League honors on defense.

The youngest Noland also seemed to step up his game even more in the postseason. He had two interceptions in a 58-25 second-round playoff victory over Westview. In the Timberwolves’ 35-13 semifinal win over West Linn, Noland broke up three passes and blocked another.

In Saturday’s championship game, where Tualatin fell 44-14 to unbeaten Central Catholic, Noland shined on both sides of the ball.

On offense, he had four catches for a team-high 67 yards. His 42-yard reception off a pass from fellow receiver Cole Prusia, coming off a reverse, set up the Timberwolves’ second touchdown, coming in the final minute of the first half.

On defense, Noland tied senior Kellen Hale for team-high honors in tackles with seven, including five solo tackles. He also broke up a pass.

And, of course, A.J. Noland had plenty of family support at the title contest, including oldest brother Lucas, who played for the Ducks in the Pac-12 championship game in Las Vegas less than 24 hours earlier.

“Lucas is here today. That just shows how much it means to him,” A.J. Noland said. “Oregon just lost the Pac-12 championship last night. He got back late, and he drove all the way up here just to watch me play. That means a lot. Sam just had a game last night in town (a 71-63 PLU win at Lewis & Clark) and has another one tonight (a 97-84 PLU victory at Pacific, with Noland scoring 16 points).”

A.J. Noland, while obviously disappointed following the football championship game setback, got a smile on his face when he was talking about his older brothers.

“We’re very close. It’s a bond that we’ll have the rest of our lives,” A.J. Noland said. “I can’t imagine not having it. A lot of families, with brothers, they grow up arguing with each other. It was never like that with us. We’ve always been so close, and sports have held us together. And even without sports, we’ve just been a family that loves each other.”

‘This team has just been something special.’ Central Catholic leaves no doubt in 6A title-clinching rout of Tualatin

‘I’m going to be friends with these dudes for the rest of my life.’ Tualatin lost a game, but Timberwolves will keep their brotherhood forever

Best defense in Central Catholic history? That unit ‘came out like dogs,’ states its case in dominant win over Tualatin in 6A final

‘I’ve got your back and you’ve got mine.’ Central Catholic offense plays for each other in 2nd half of title tilt, and that approach carries Rams to another state title