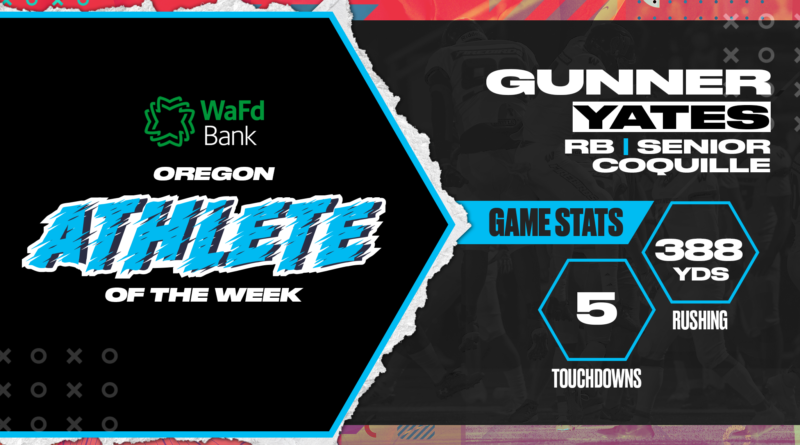 Congratulations to Coquille running back Gunner Yates for being voted SBLive’s WaFd Bank Oregon High School Athlete of the Week for Nov. 22-28!

The senior ran for an OSAA title game record 388 yards and five touchdowns, including a 74-yard score that gave the Red Devils the lead for good, in a 38-28 win over Kennedy in the 2A championship game. (STORY, PHOTOS)

Yates received 54.76% of the vote, beating out Jesuit’s Jacob Hutchinson, who finished second with 37.72%. Marshfield’s Mason Pederson finished third with 2.54% and Marshfield’s Dom Montiel finished fourth with 2.5%. There were over 102,000 votes tallied this week!

Riley Cantu, Kennedy football: Cantu did all he could for the Trojans in the 2A championship game, throwing for 266 yards and three touchdowns. Coquille won, 38-28. (STORY, PHOTOS)

Ryan Cary, Marist Catholic football: Cary turned in two of the biggest plays in the 4A championship game. He scored on an 82-yard kickoff return in the second quarter and a 42-yard reception on the final play of the first half before the Spartans fell to Marshfield, 49-34. (STORY, PHOTOS)

Vandon Fessler, Silverton football: Fessler had 10 receptions for 145 yards (including a 25-yard touchdown) in the Foxes’ 5A title-clinching 26-20 victory against Thurston. (STORY, PHOTOS)

Kellen Hale, Tualatin football: Hale had nine tackles and made an interception on West Linn’s second possession to lead the Timberwolves’ defense in their 35-13 semifinal win. (STORY, PHOTOS)

Vaun Halstead, Thurston football: Halstead led the Colts with 11 tackles, including 4.5 tackles for loss, to lead a defense that held Silverton (which averaged more than 420 yards entering the game) to 216 yards of total offense in the 5A final. Thurston came up short in a 26-20 loss, however. (STORY, PHOTOS)

Jordan King, Central Catholic football: King had three interceptions in the Rams’ 35-28 semifinal win over Jesuit, including a game-sealing takeaway with about two minutes remaining. He returned his second interception 14 yards for a third-quarter touchdown. (STORY, PHOTOS)

Conley Martin, Adrian football: Martin ran for 211 yards and three touchdowns and passed for 57 yards and another score, leading the Antelopes to a 46-38 victory over Powder Valley in the 1A title game.

Dom Montiel, Marshfield football: Montiel passed for 439 yards and five touchdowns — giving him 50 for the season — to lead the Pirates to a 4A title-clinching 49-34 victory against Marist Catholic. He also rushed 13 times for 121 yards, giving him 560 yards of total offense. (STORY, PHOTOS)

Juri Moros, South Umpqua football: Moros accounted for all of the Lancers’ points in the 3A final, kicking field goals of 34, 23 and 36 yards in a 14-9 loss to Siuslaw. (STORY, PHOTOS)

Mason Pederson, Marshfield football: In the Pirates’ 49-34 win over Marist Catholic in the 4A final, Pederson caught nine passes for 203 yards and three touchdowns. (STORY, PHOTOS)

Braydon Thornton, Siuslaw football: Thornton finished with seven catches for 117 yards — including a 34-yard touchdown — as the Vikings defeated South Umpqua 14-9 for the 3A title. (STORY, PHOTOS)

Jack Wagner, Tualatin football: Wagner intercepted a pass on the first snap, and the second of his two touchdown runs staked the Timberwolves to a 28-0 lead midway through the second quarter of their eventual 35-13 semifinal victory against West Linn. (STORY, PHOTOS)