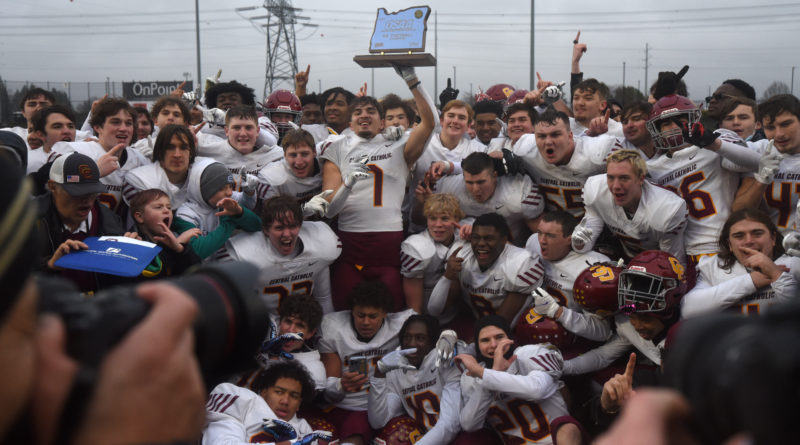 A year unlike any other ended with a familiar sight — Central Catholic celebrating at midfield on the Hillsboro Stadium turf.

The Rams put on a dominant performance in the second half of Saturday’s Class 6A championship game against Tualatin, pulling away for a 44-14 victory that capped an undefeated season and a second consecutive OSAA state title.

After playing 20 games in the past nine months since kicking off the abbreviated spring season caused by the COVID-19 pandemic, the Rams (15-0) surged around senior receiver Jordan King as he held aloft the blue championship trophy.

“All of this was forged through that six-game COVID season,” said senior linebacker Emar’rion Winston, a University of Oregon commit whose 58-yard fumble return opened the scoring. “We had the majority of our team returning, and in that moment, we all were feeling each other out, seeing how we play football, where our weaknesses were compared to our strengths.

“And from there, our connections just got way stronger. In the summer, we came back, and it was like we were playing football with lifelong friends — our brothers, if you will, because that’s exactly how it feels.”

Winston didn’t play a big role for the 2019 state champions, but he was among those who took center stage for a Rams defense that held Tualatin in check after halftime, allowing Central Catholic to seize control.

“I didn’t socially connect with the players on that team as much as I do with this one,” said Winston, who had six tackles. “I feel that’s because this team has just been something special. The connection with this group was very amazing, and that’s why on the field, we looked so good.”

The Rams offense struggled to get out of the gates against a Timberwolves team playing in its first final since 2010. But like a week ago in the semifinal against Jesuit, Central Catholic found its rhythm in the second half, scoring on its first four possessions to break the game open.

“I give all the credit to the offensive line,” said junior tight end Riley Williams, who had four catches for 140 yards and a touchdown. “They stepped it up, and we started getting the running game going and started moving the ball.”

Another factor was sophomore quarterback Cru Newman settling in after a slow start. His slithering escape on third down on the Rams’ first possession of the second half, breaking two tackles in the backfield and two more during an 11-yard run, set up Ellis Bynum’s 24-yard touchdown one play later for a 28-14 lead.

Newman was 12 of 24 for 243 yards and a touchdown, finishing a dream first season as a starter.

“Just a crazy experience,” Newman said. “That’s the goal all along, but to actually be here, living it right now, it’s crazy.”

The Timberwolves (12-2) were left ruing several lost opportunities in the first half, when they posted plenty of yards yet still found themselves trailing thanks to two fumble-return touchdowns by the Rams.

“Football is a momentum game, and when one thing goes one way, and it keeps building and building, I feel like that’s just what they had,” said senior receiver Cole Prusia. “But I’ve got to give all the credit to Coach (Steve) Pyne and their staff. They played so well. They prepared well, and it showed because they’ve got the state title, and I’m proud of them.”

Prusia, the spring season’s Gatorade player of the year and a Princeton commit, missed the final 16 minutes after cramping, and Three Rivers co-offensive player of the year Malik Ross noticeably slowed after a knee injury sustained on Tualatin’s second drive worsened as the game wore on.

Ross ran for 138 yards and a touchdown in the first half but managed just 37 yards after halftime.

“I just wanted to keep fighting, but I couldn’t go any more,” a tearful Ross said. “We all wanted it so much, wanted it for each other. We wanted to finish the job, but we just came up short.”

Lever added, “It makes a difference when you go into battle without a bullet or two, but hats off to Central Catholic. They beat us today.”

The Rams made sure of that with a blistering 14-minute stretch during which they scored 23 unanswered points.

Senior Asher Wojskol kicked a state championship game record 49-yard field goal that scraped over the crossbar to make it 31-14. Central Catholic then forced a three-and-out and needed just one play to score again, with Newman hitting Williams on a crossing route that turned into a 53-yard touchdown.

The Timberwolves again drove to Rams territory on their next possession, but Ross was swarmed on back-to-back runs to end the drive.

Newman found King wide open along the right sideline for a 40-yard gain, then scrambled out of trouble for 26 yards to set up Jacob Hardeman’s 4-yard touchdown to cap the scoring.

“We were hungry, and we really wanted this win,” Williams said. “There was a lot of anxiety, getting the nerves out, with many of these guys not playing in the playoffs ever, but as you can see, it worked out. We wanted that ring. We had the guys to do it, and we did it.”

After Winston’s opening score, when he scooped up a fumbled snap and rumbled 58 yards for the touchdown, the Timberwolves drove to Rams territory three times but came away empty on each occasion.

They finally tied the score at 7-7 on Ross’ 15-yard run out of the Wildcat with 4:31 before halftime.

The Rams answered with their best drive of the half, with Newman hitting Williams for 22 yards to set up Bynum’s first score on a 17-yard run.

On Tualatin’s ensuing possession, Gavin Jackson stripped the ball free, and sophomore Timmy Mitchell picked it up and scampered 27 yards for the Rams’ second defensive score of the half.

“The defense stemmed the tide for us,” Pyne said. “We were not functioning very well in the first half offensively, and they gave us some breathing room.”

The Timberwolves weren’t done. Prusia took a double-reverse handoff, patiently waited for AJ Noland to break free and lofted a 42-yard pass to the sophomore. On the next play, Jackson Jones found Peter Burke tiptoeing the sideline in the left corner of the end zone for a 13-yard score, making it 21-14 at halftime.

“It isn’t always a fairy tale, but it’s about the ride,” Lever said. “I’m proud of the way we competed all season. It just wasn’t in the cards today.”