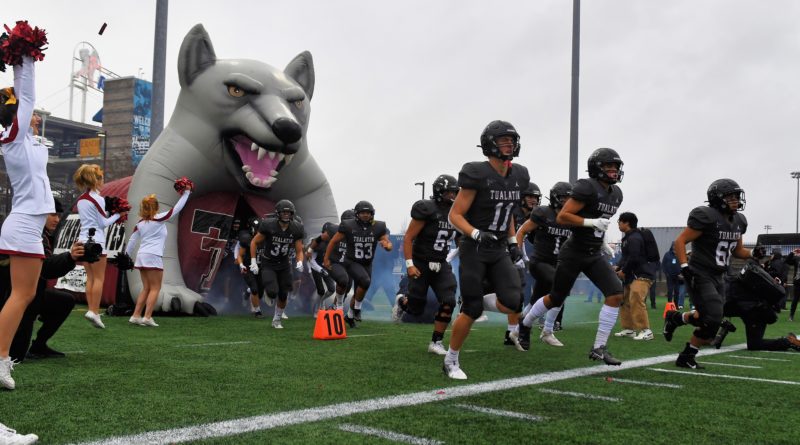 No, the Tualatin football team didn’t get the victory it so much desired.

Tualatin had its state championship aspirations taken away by a determined, talented Central Catholic squad.

But there’s one thing, the Timberwolves say, that will never be taken away — their brotherhood.

Tualatin came up short in its quest to win the first football state crown in school history, as it fell 44-14 to the Rams in the Class 6A state championship contest, held Saturday under rainy, chilly conditions at Hillsboro Stadium. But the Timberwolves’ team bond still remains, maybe stronger than ever.

“The brotherhood made it special,” said Tualatin senior receiver/defensive back Peter Burke, who had a touchdown catch in the title game. “We’ve been together for as long as you can remember. All of us are best friends, always hanging out, always talking to each other. We just came together so well. The chemistry is there, obviously. Everyone just loves each other.”

“I feel like our brotherhood was super strong,” said Tualatin senior receiver/defensive back Noah Ogoli, who had three catches on offense and an interception on defense. “That’s why we got this far.”

That strong brotherhood bond was, according to players, thanks to the team’s strong group of seniors.

“We just knew we had to bond from the very start, and I have to give it to all the seniors,” said Tualatin sophomore receiver/defensive back A.J. Noland, who had a team-high 67 receiving yards Saturday. “They gave it everything they could. They spent day in and day out on the field, off the field, always helping us get the team to where we are. They’re the core of this team, and I’m grateful for everything they’ve done.”

“It was a great season, a great run,” Burke said. “This is what we knew we could do, since we were young. We knew we had the team and the talent. We’ve all been together since about third grade, so we knew this was our year. This was our time.”

“It went really well,” Ogoli said of the Timberwolves’ season. “Obviously, we came up short today. But I had a fun time. We won a lot of games because of our effort. We put a lot of focus into detail.”

“We knew, coming into this season, that we’d have a good team,” Noland said.

However, that good team found itself facing a quick, unexpected deficit in Saturday’s title game, as Central Catholic senior Emar’rion Winston returned a Tualatin fumble 58 yards for a touchdown, giving the Rams a 7-0 lead with 10 minutes and 4 seconds left in the first quarter.

The Timberwolves came back on a 15-yard touchdown run by senior running back Malik Ross. Tualatin senior Dominic Borges added the extra-point kick, tying the score at 7-7 with 4:31 left in the second quarter.

But Central Catholic responded — in a very big way.

The Rams got a 17-yard touchdown run by senior Ellis Bynum and then, on the next play from scrimmage, Central Catholic sophomore Timmy Mitchell returned another Tualatin fumble 27 yards for a score, giving the Rams a 21-7 advantage with 1:07 remaining in the second quarter.

Tualatin senior receiver Cole Prusia threw a 42-yard pass to Noland off a reverse, moving the ball to the Central Catholic 13-yard line. On the next play, senior quarterback Jackson Jones threw a 13-yard touchdown pass to Burke, trimming the deficit to 21-14 with 45 seconds left in the first half.

“Cole threw a great ball to A.J., and A.J. made a great catch, and we went fast,” Burke said. “With Jackson and I, that’s stuff we’ve been working on since freshman or sophomore year. He knew where I was, and I knew what we were going to do. He just threw a great ball, and I caught it in the end zone.”

Tualatin trailed Central Catholic by that seven-point margin going to halftime, but the Timberwolves wouldn’t be able to get any closer after the intermission.

“We never wanted to give up,” Ogoli said. “It would have been especially disrespectful to the guys who were hurt, because they’d die to be out here. We were motivated to keep going, and going, and going.”

Ross had a spectacular game running the ball for the Timberwolves, gaining 175 yards on 25 carries. Prusia had a strong overall performance, carrying the ball once for 54 yards, completing his only pass attempt for 42 yards, and having two catches for 15 yards.

Burke had five catches for 27 yards. Noland picked up his 67 receiving yards on four receptions. Ogoli had three catches for 19 yards and three rushes for 17 yards. Anderson had two catches for 16 yards.

For the Tualatin defense, senior Kellen Hale and Noland were each in on seven total tackles. Senior Brandon Chin was in on six tackles. Junior Will Wilson and senior Alex Parra each had a sack. Hale and junior Drew Corcoran split a tackle for loss.

“Sometimes the game doesn’t go your way,” Noland said. “For me personally, I know it’s the seniors’ last game, and I didn’t want those guys to go out in a way that made them feel bad. I wanted the team, and everyone, to go out how we started. We wanted to give it our all. It may not show up on the scoreboard, but we battled — we battled to the end.”

“We’ve got a great team, but we just made a few too many mistakes,” Burke said. “We couldn’t execute when we needed to.”

Still, that doesn’t take away from what the Timberwolves say has been a special season.

“My brothers, that’s what means the most to me,” Burke said of what he’ll take from the season. “I’m going to be friends with these dudes for the rest of my life. Obviously, there’s Coach Lever. He’s a great guy, and he taught us a lot. He got us here, and he’s taught us everything — on the field, off the field.”