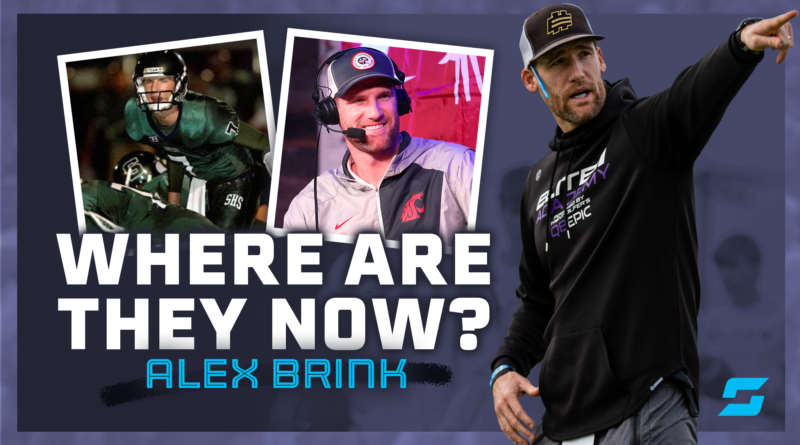 All these years later, the former Irish and Washington State star still is making an impact in Oregon high school football

Former Sheldon standout Alex Brink learned a lot from his high school football coach, Marty Johnson. How to find the open receiver in a spread offense, how to appreciate opportunities as they come your way, and the importance of how high your socks climb up your legs.

“I was lucky to be around a coach with his knowledge and with his passion for developing young men. Our on-field success was awesome, but that’s not what I remember most,” Brink said. “It seems kind of silly, but one of his big rules was that socks had to be crew length or taller. It showed me the importance of developing discipline and standards in whatever you do — that is what creates success.”

And the Irish had plenty of success under Johnson’s leadership — nine league titles and three big-school championships. The foundation for that run was laid with Brink behind center, getting on the field his sophomore season after starter Matt King went down with an injury in the opener.

By midseason of that year, Brink and the Irish had knocked off powerhouse Marshfield.

“We snapped a long league win streak that they were on, and that moment felt like a changing of the guard — it was really special,” Brink said.

The following season, Sheldon went 12-0 before suffering its only loss, to McNary in the big-school final.

The loss motivated Brink and his teammates to make a return to the title game as seniors in 2002 against Lake Oswego.

Brink remembers an early pick-six that went against him and put the Irish down 14-6 — only the second time they had trailed all season.

He also recalls a screen pass that almost went the distance. Brink finished that drive with a 1-yard plunge over the goal line for a 28-17 lead early in the second half.

“Lake Oswego was really talented, like they always are, and it was a back-and-forth game,” Brink said. “We finally got to a point where we had to run the clock out and not give them another chance. It was a really hard-fought game.”

The Irish finished the season with a 14-0 record with Brink being voted the state’s offensive player of the year. He also finished his career as Oregon’s all-time leading passer with 9,011 yards.

“Marty was so far ahead of his time, running that spread style of football before most people were doing it — we were flinging the ball all over the place,” Brink said.

Twenty years later, he remains second on that list, with only West Linn’s Tim Tawa (2014-16) throwing for more yards.

Despite his high school accolades, Brink’s college opportunities were limited to a handful of I-AA offers from Northwest schools. Two weeks before signing day, a coaching change saw one of his suitors move into the role of quarterbacks coach at Washington State. A Pac-10 offer followed, and he fired 76 touchdowns in four seasons with the Cougars.

The Houston Texans picked him in the seventh round of the 2008 draft, but most of Brink’s professional playing career came in the Canadian Football League, split between the Winnipeg Blue Bombers and the Montreal Alouettes. He was part of the Winnipeg team that played for the Grey Cup in 2011.

“My pro playing career was unique and fun,” Brink said. “I like to describe the Canadian League as a mix between college and pro. It’s tight-knit and they play a high level of game. The money isn’t there like the NFL, but you are professional. It was a really neat experience to see the entire country of Canada, visiting places I wouldn’t have otherwise.”

Six years ago, Brink and former University of Oregon walk-on Ryan DePalo started EForce Sports, which offers personal training to athletes from the high school ranks up through the pros. The Lake Oswego-based company specializes in football and baseball skills with Brink playing a pivotal role in quarterback development.

“You look at the brackets and pretty much every school playing (late in the playoffs) has someone who is involved in what we do,” Brink said. “I grew up as a football player in Oregon, and trying to get opportunities was difficult. Our mission is to help athletes reach their goals and to be a platform for them.”

In addition, Brink is in his seventh year working as part of the on-air radio team covering Cougars football for the Washington State Radio Sports Network.

“It’s great. I get to watch and talk football,” Brink said. “Plus, I stay involved with the Pac-12, which is a nice fit for my EForce business.”

Brink has been married to Joani for five years, and the couple is raising a 2-year-old son, Xander.