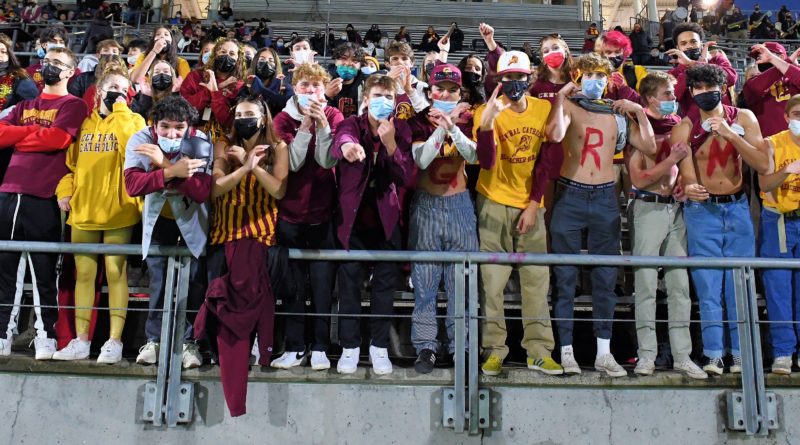 The Central Catholic Rams and the Tualatin Timberwolves are set to square off at noon Saturday at Hillsboro Stadium for Oregon’s 6A high school football championship.

Who has the edge? We break down each side position-by-position …

Tualatin has one of the best 1-2 punches at the quarterback position in recent memory in senior Jackson Jones and junior Jack Wagner. Jones was runner-up at the Northwest 9 Showcase last summer in Yakima, Wash., and he has followed with a solid season. Wagner stepped in admirably when Jones was injured in Week 2 and missed two games. He gets a series or two each game to offer a glimpse of what Timberwolves fans can expect full-time next fall.

Rams sophomore Cru Newman, however, has taken his game to another level during the postseason — and that previous level was good enough to earn him Mt. Hood offensive player of the year honors. He’s thrown for 798 yards and eight touchdowns in four playoff games while showing elusiveness in the pocket — he ran for 80 yards in the semifinal win over Jesuit.

Central Catholic senior Ellis Bynum has provided a jolt to a running game since his midseason return from injury. He’s rushed for 381 yards and seven touchdowns during the Rams’ playoff run, and change-of-pace back Jacob Hardeman had a couple of big runs late in the semifinal win over Jesuit.

Tualatin senior Malik Ross, though, is a “touchdown waiting to happen,” as Timberwolves coach Dan Lever likes to call him. Ross can be either a workhorse back willing to pound the rock between the tackles or a home run threat when he gets to the perimeter. He’s gained 463 yards and a playoff-high 10 touchdowns in four games.

Both teams have star playmakers on the outside, with seniors Cole Prusia of Tualatin and Jordan King of Central Catholic each on the short list of best receivers in the state. Either can take the top off a defense or make the tough catch at the first-down stick, and they’re complemented by solid No. 2’s — Peter Burke for the Timberwolves and Stryder Todd-Fields for the Rams.

Where the defending champions have a clear-cut edge is at tight end. Tualatin junior Richie Anderson is no slouch, but there’s no tight end in the state — and perhaps on the West Coast — quite like Rams junior Riley Williams when he’s at the top of his game.

Both offensive line units are among the state’s best. The Timberwolves might have the more well-known names, led by Three Rivers co-offensive lineman of the year Lucas Edwards and fellow first-team all-TRL selection Charlie Freadman and joined by second-team all-league selections Jake Helton and senior Brandon Chin.

Rams coach Steve Pyne likens his group to independent contractors, a bunch of lunch-pail kids who do their work without much fanfare. They had only one first-team all-Mt. Hood selection (senior Garret Cappalonga), but they also have 6-5, 350-pound road grader Myale Jones at left guard.

Both teams have underrated units along the defensive front. Jones anchors the Rams run defense as a nose guard, while senior Andrew Thernell and junior Joe Merlino provide steady play alongside him.

Besides being a standout tight end for the Timberwolves, Anderson also is one of the state’s top defensive end prospects, showing off his ability with a strip sack against West Linn in the semifinals. He and senior Brandon Chin, a first-team all-TRL selection, have four tackles for loss apiece in the postseason.

The matchup at this position features two of the state’s premier linebackers. University of Oregon commit Emar’rion Winston, who has three sacks for the Rams, hopes to join older brother La’Mar as a two-time state champion. Tualatin senior Kellen Hale might be one of the most underrated players in Class 6A. He had nine tackles, two hurries and an interception in the Timberwolves’ semifinal win.

Hale was joined on the all-TRL first team by senior Brayden Michael. The Rams’ duo of seniors Gavin Jackson and Gibson Coyle also rank among the state’s most underrated players, and they played key roles for a team that has allowed 12.9 points per game.

The Timberwolves’ two big playmakers on offense also form the nucleus of an outstanding secondary, with Ross at safety and Prusia at cornerback both making the all-TRL first team. Wagner and sophomore AJ Noland, both second-team selections, round out the starting quartet.

Not to be outdone, the Rams also had two first-team all-conference selections in their secondary with King and senior Zach Grisham at safety, as well as second-team all-MHC’er Todd-Fields as a lockdown corner.

In Ross and Todd-Fields, two of the most electrifying return men in the state will take center stage during kickoffs and punts.

Will Saturday’s game come down to a late field goal? While Wajskol hasn’t been asked to make a pressure kick so far this season, Borges nailed a 19-yarder with 2.6 seconds left to lift Tualatin to a 24-21 win over Lakeridge in Week 7.

Tualatin’s Dan Lever has done a phenomenal job transforming the Timberwolves from a 2-8 team the year before his arrival in 2017 into one of the Northwest’s top programs, one that could travel to California and knock off an SBLive California Top 50 team in Menlo Atherton and reach its first state final since 2010.

That said, Saturday’s final marks Central Catholic coach Steve Pyne’s fifth appearance in the championship game since 2013, with three titles and a runner-up finish burnishing a resumé that features 192 wins in 23 seasons.

This title affair matches SBLive Oregon’s preseason top two teams, so it’s no surprise to see them in the final. I’ve been on the Tualatin train all season and see no reason to depart it now — even with it being Central Catholic ahead on the tracks, waiting to derail the train before it reaches its destination.

The game should be a close one, with neither team ever holding more than a one-score lead. Wajskol kicks a field goal midway through the fourth quarter to put the Rams up 31-28, but on a championship drive, the Timberwolves put their fate in Ross’ hands, and he delivers with a last-minute touchdown to secure Tualatin’s first title.