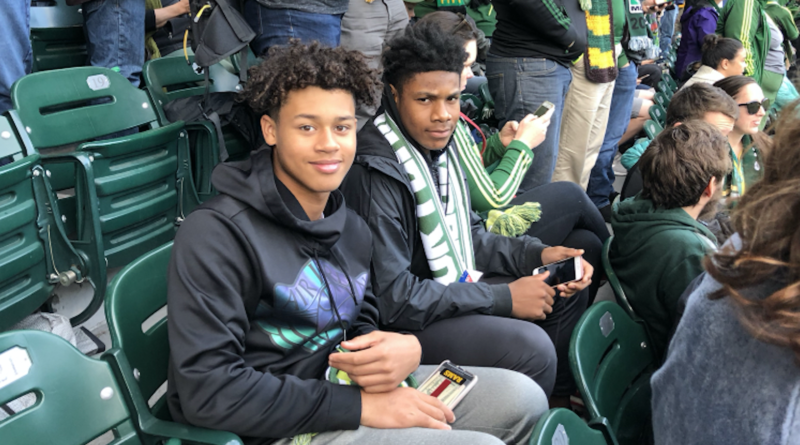 Gavin Jackson and Malik Ross aren’t technically brothers, but the senior football stars might as well be.

Jackson, a linebacker for Central Catholic, and Ross, Tualatin’s dynamic tailback, became fast friends during youth travel football. They have remained close since and will face off against each other for the first time in five years when the third-seeded Timberwolves (12-1) take on the fourth-seeded Rams (14-0) in Saturday’s Class 6A state championship game at Hillsboro Stadium.

“I’m going to try to make him feel bad about himself a little bit,” Ross joked. “It’ll definitely be a new feeling. Also, there’s a state championship on the line.”

“I’m just excited to play and be one of the last two teams standing,” Jackson said. “And it’ll be fun to play against Malik in my last game.”

The friendship between Jackson and Ross commenced at an FBU camp in sixth grade. The two sat next to each other on the bus and shared a hotel room in California.

“We just bonded right away,” Ross said. “He had a good vibe, we had a lot of stuff in common, and we’ve just been rocking it with each other ever since.”

Added Jackson: “That whole trip, we were just getting connected with each other.”

After FBU, the new friends became middle school rivals with Ross carrying the ball for Tualatin while Jackson played for Lincoln.

In seventh grade — their most recent battle until Saturday — Jackson gave Ross a minor concussion on a tackle. The game was a runaway Tualatin victory, but Ross still remembers the hard hit from Jackson.

“That’s his competitiveness,” Ross said. “Even though his team was getting smacked, he wasn’t backing down. I carried the rock a lot of the time, and he was tackling me most of the time. It’s probably going to be the same this time, him tackling me just like seventh grade.”

Both players have blossomed into bonafide stars at the high school level.

Ross recently picked up an offer from Western Oregon and has received interest from Air Force and Portland State.

“Malik is the ultimate competitor,” Tualatin coach Dan Lever said. “He shines in high-pressure situations and he’s very comfortable being uncomfortable. He’s a fun kid to be around, very serious about being successful. You don’t see him goofing around. He’s not a kid that loses focus.”

The 5-foot-10, 200-pound Jackson was voted second-team all-Mt. Hood at linebacker this season. He is a key piece of a Rams defense that is allowing just 7.8 points per game.

Central Catholic coach Steve Pyne said Jackson, who also has college football aspirations, is an exceptionally instinctual linebacker who is playing with more discipline as a senior. Pyne felt Jackson’s production was worthy of Mt. Hood defensive player of the year consideration.

“I think he’s playing within the defense and letting things come to him instead of trying to make every single play,” Pyne said. “When you do that, you can get out of position and compromise the defense. He’s been really dialed in this year. … Off the field, Gavin is a quiet, unassuming kid. He always has a smirk on his face, like he knows something you don’t.”

The bond between Jackson and Ross runs much deeper than football.

Jackson’s dad, former Portland State running back Andre Jackson, is an unofficial stepfather to Ross. Ross does not have a relationship with his biological dad.

Ross and Andre don’t see each other as often these days, but Ross did join the Jacksons for Thanksgiving dinner. Naturally, there was plenty of discussion about the semifinals and a potential championship game matchup.

“We talked about that a little bit, but we were mostly talking about how thankful we were to be in this position,” Ross said.

Trash talk between Jackson and Ross has been nonexistent in the days leading up to the final. The two friends know Saturday will be a little weird, but they are excited to close their decorated high school careers on the same field.

“We’re still going to be friends on Saturday, but on the field it’ll be different,” Jackson said. “I’m just focusing on what we’ve got to do to win.”

Added Ross: “I’m positive there will be trash talk throughout the game! But yeah, I’m very excited. I expected us to be here, though. Not a lot of teams get the chance to play in the championship game, and we’re looking forward to playing a great team.”

Who will win? Our predictions