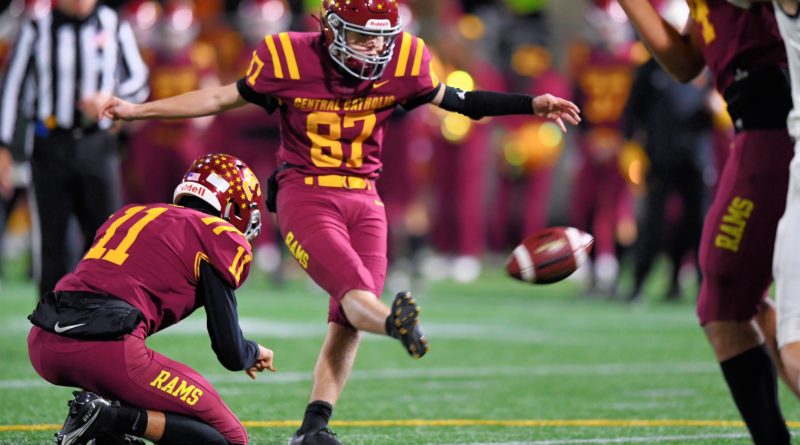 A chance encounter with a former Green Bay Packer and — of all things — COVID-19 quarantine helped turn Wajskol into a varsity football standout for the unbeaten Rams.

By his own admission, Asher Wajskol has been on a weird journey.

It’s a journey that has seen the Central Catholic senior go from being a 5-foot-2, 100-pound JV2 soccer player to being the primary kicker/punter, and a big-time special teams weapon, for the unbeaten Rams football squad that will play for the Class 6A state championship Saturday.

“This is crazy,” Wajskol said. “It’s my first year on varsity — not just in football, but in any sport.”

Crazy and, well, you could say, weird.

“I had a weird journey to get here,” Wajskol, now listed at 6-0, 165, said with a laugh. “My best friend (Central Catholic senior Luca Rodarte) is the long snapper here. I started out just helping him, catching snaps for him. When I was doing that, I just started punting some.”

It turned out to be something Wajskol enjoyed — and he wasn’t too bad at.

That’s when some more weirdness, in the form of circumstance, happened.

“I just ran into (former Green Bay Packers punter) Justin Vogel out at Delta Park. I talked to him, and he helped me out,” Wajskol said. “I started punting and kicking that summer, but I wasn’t anywhere near good.”

But that didn’t matter. Wajskol was hooked.

To that point, Wajskol’s high school sports experience was being a tiny goalkeeper on the JV2 boys soccer squad at Central Catholic.

Then, something not exactly weird, but very unfortunate, happened — COVID-19.

With COVID-19 came the quarantine.

While, of course, the quarantine was nothing that anyone enjoyed, in its own weird way, it might have turned out to be a good thing for Wajskol.

“I grew a bit during quarantine, and I put on some muscle,” he said.

“I was out there every day, working on kicking and punting,” he said.

During his junior football season — the revised, shortened 2021 spring season — Wajskol played at the sub-varsity level. That made sense, after all, as last spring the Rams had standout senior kicker Atticus Sappington, who played in the 2021 Les Schwab Bowl on his way to joining the Oregon State football team this fall.

“I knew that Atticus would be leaving, and I would have a chance to do the kicking,” Wajskol said.

That’s when he got some help from his best friend, Rodarte, who is ranked the No. 1 senior long-snapper prospect in the state and No. 21 in the nation by Rubio Long Snapping.

“The kicking camps have been a really good opportunity. I go to the Chris Sailer camps,” Wajskol said. “If you have 100 kickers out there, you get to see where you match up. You also make a lot of good connections. I met (Summit High School standout kicker/punter) Soren McKee there. I sort of followed the same path as Soren (who was the goalkeeper for Summit’s state championship boys soccer team this fall). I was the goalie for the JV2 soccer team here at Central during my freshman and sophomore years. I was all of 5-2 and 100 pounds. Soren is great. He’s ranked ahead of me, but I got him on points scored this season.”

Points. Yes, Wajskol has scored a bunch of them for the high-powered Central Catholic offense.

Wajskol has booted 83 extra points, and he’s gone 3 for 4 on field goal attempts with a long of 39 yards. That gives him 92 points entering Saturday’s title tilt.

Wajskol also has excelled as a punter for the Rams, averaging 37 yards per punt.

Wajskol, for his efforts in Mt. Hood Conference play, was a second-team all-conference selection as a kicker and an honorable mention pick as a punter.

“I really like place-kicking. I think it’s super fun,” Wajskol said. “I also really like punting. Once you get the basics down and everything just clicks, it’s so fun. Kickoffs are maybe my weakest aspect, but I think that will come along when I get bigger.”

But even the kickoffs have been pretty good for Wajskol. He has 50 touchbacks this season, while also mixing in plenty of squib kicks and line-drive knucklers.

And, in his first varsity season — in any sport — Wajskol has played a key role for unbeaten Central Catholic. He was crucial for the Rams in their 35-28 win over Jesuit in the Class 6A semifinal slugfest last week at Hillsboro Stadium.

Wajskol went 5 for 5 on extra-point kicks. He also helped set the tone for the game, booting the opening kickoff for a touchback. Late in the first half, with the score tied 7-7, Wajskol boomed a 44-yard punt, with the ball getting past the Jesuit returner and getting downed at the Crusaders 26-yard line with 1 minute and 47 seconds remaining in the second quarter. From there, Jesuit would get one first down before time ran out in the half.

“With punting, you want to get the most distance that you can get. I try to flip the field,” Wajskol said. “You want to set the other team up for failure.”

In the second half, a Wajskol kickoff helped set up one of the key plays of the game. The Rams had just taken a 21-14 lead after a spectacular 33-yard touchdown catch by Central Catholic senior Stryder Todd-Fields with 3:23 left in the third quarter.

On the ensuing kickoff, Wajskol smacked a line-drive knuckler, with the Jesuit returner having to put his knee on the turf to field the ball — at the Crusaders 3-yard line.

“On kickoffs, we change things around to keep the return teams on their toes,” Wajskol said. “And we have a really good coverage team.”

Three plays after the kickoff, Central Catholic senior Jordan King intercepted a Jesuit pass and returned the ball 14 yards for a Rams touchdown.

“The pick-6 was a really good moment for me,” Wajskol said. “I was pretty excited about that.”

King’s touchdown increased the Rams’ lead to 28-14. Central Catholic would hold off a late Jesuit rally to win 35-28.

The Rams (14-0) will now face Tualatin (12-1) in Saturday’s Class 6A state championship game at noon at Hillsboro Stadium.

“We’re real excited about that,” Wajskol said. “This is a great opportunity for everyone to keep showing what we can do. I don’t think we have any real weaknesses.”

As for the future, Wajskol is hoping to play football at the collegiate level, but that’s not his top priority.

“Hopefully, I’ll be playing some sort of football,” he said. “But my academic pursuit is the main thing for me. I want the best education that I can get. Hopefully, that will be at a school where I can also play football.”

Before all of that, however, Wajskol has something else on his schedule — capping his first varsity sport season by playing in Saturday’s state championship game.

The journey — the weird journey —continues.