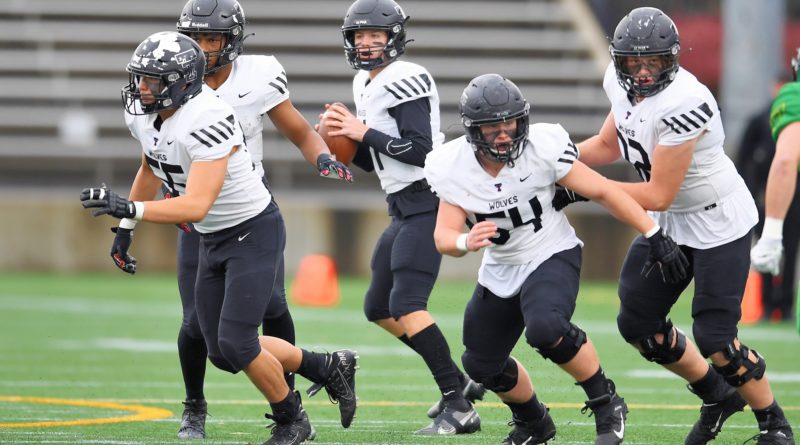 Sure, there are the names everyone knows when it comes to the high-powered offensive attack of the Tualatin football team.

But running or passing, there’s one common factor that powers the Tualatin attack — the Timberwolves’ imposing, skilled offensive line.

“Every single game, Coach (Tualatin offensive line coach Woody Toms) says it takes an attitude to play here,” Tualatin senior center Jake Helton said after Friday’s 35-13 win over West Linn in a Class 6A state playoff semifinal at Hillsboro Stadium. “Coach says he’s willing to put the team on our back, every single game, if he needs to do it.”

“I think we do a lot,” Tualatin senior guard Brandon Chin said following the semifinal victory, which put the Timberwolves in Saturday’s Class 6A state championship game, where they’ll play Central Catholic at noon Saturday at Hillsboro Stadium. “We give Malik some big holes and make sure he’s able to run. We give Jackson a lot of protection.”

Maybe no one appreciates that more than Jones.

“Without a good line, you don’t have a good team,” Jones said. “So, it’s really huge that we have a good line to go along with all the players, and it’s good that we utilize them. They’re a big part of our team. Those five guys are really close. I have them over to my house for dinner once a week, and we just bond. We’re a really close team.”

“I like to say that they’re the beating heart of the team,” Toms said of the linemen. “And I think that guy (Tualatin head coach Dan Lever) would agree, and I think that Malik would agree. They just do a great job.”

Toms knows all about how strong offensive play leads to success at Tualatin. A 2008 graduate of the school, Toms was a first-team all-state offensive lineman and defensive lineman for the Tualatin team that played in the 2007 Class 6A state championship game, where the Timberwolves fell 28-14 to Sheldon.

And Toms knows that this is a special group.

“In the past, we’ve had guys that were big, but maybe not the most talented,” he said. “And there were times that we had a smaller line, which was really talented, but just not big enough. I think that this year, we’ve got big guys with the talent. It’s a dream situation for an offensive line coach, because I’m coaching big guys with a lot of talent, and they can do what I ask them to do.

“But really, it’s their tenacity. And they’ve really come together like a brotherhood. They’ve really taken it on that, ‘This is our team, and this team is going to go how far we take them.’”

That linemen brotherhood has been years in the making.

“We’ve been working as a group since third grade,” Helton said. “All the guys, Charlie, C.J., Brandon, Lucas, since third grade youth football, we’ve been playing together, up through high school. Now, it’s all paid off.”

“This group has been playing together for a long time,” Chin said. “We just hang out together. We’re tight like that.”

And, of course, the Tualatin linemen put in the hard work together.

“That’s one of the keys — they’re the leaders in the weight room,” Toms said. “They’re the first guys in and the last guys out. One thing that Lever likes to do is pair up some younger guys, or some skill guys, with linemen in lifting groups. That’s another thing that says they’re the drivers of the team, they’re that beating heart of the team.”

“They put in a ton of work, whether it’s in the weight room or on the field — they’re just grinding and sweating their butts off,” Jones said.

That hard work sure seemed to pay off for Tualatin in the semifinal win over West Linn.

With the Timberwolves holding a 14-0 halftime lead, the offensive line seemed to take over the game in the second half.

In the final two quarters, Tualatin rushed for 206 yards on 20 carries.

“We started a little slow, but we finally got going,” Helton said with a smile.

“We started off the game a little rough, pad level was a little high,” Toms said. “But at halftime, we just straight-up challenged them. We said, ‘Get your pad level low, and we’re going to win this game.’ We did that, and you saw what happened.”

“That makes us pretty happy, because we did our job,” Chin said.

“Malik’s great, and we take pride that we help make that happen,” Helton said.

The Tualatin linemen, like the rest of the team, were thrilled with helping the Timberwolves reach the Class 6A state championship game for the first time since 2010.

“It means a lot, coming here, beating them, and getting a chance to play for a state title,” Chin said.

“We have to be physical up front, like we’ve been through the whole playoff run,” Chin said.

“It’s going to take focus and determination,” Helton said. “We have to keep playing like we’ve played all year. We need to keep our heads down and smack them.”