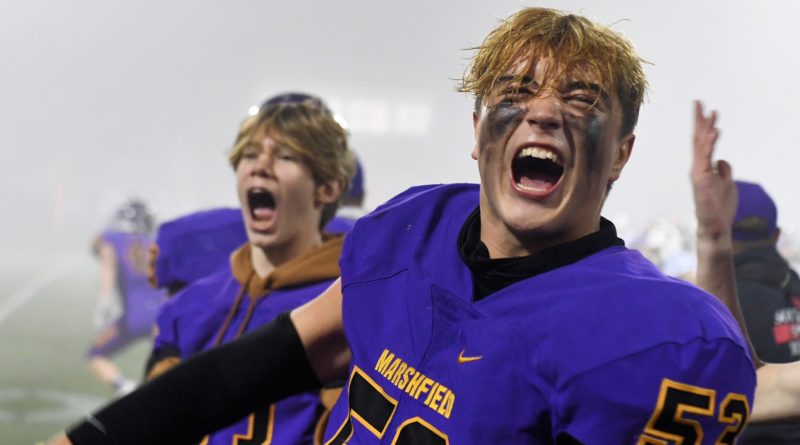 For all the offensive pyrotechnics Marist Catholic and Marshfield produced in Saturday’s Class 4A state championship game in Cottage Grove, one chain link made all the difference.

One chain link separated the Spartans from first-and-goal with a chance at a tying touchdown and the Pirates going 99 yards for a game-sealing touchdown of their own.

The teams combined for 981 yards of total offense, with the Pirates racking up an 11-man state championship game record 608. However, it took Dom Montiel sprinting the final 12 yards for a score that put the bow on a career-defining night, clinching Marshfield’s 49-34 victory over its Sky-Em League rivals to secure the school’s first state championship in the past 29 years.

“They haven’t had one since 1992, and after last year, with no spectators, to have all this support, it’s amazing,” said the senior quarterback, who set career highs with 439 yards passing and 121 rushing while accounting for six touchdowns. “Since third grade, our dream has been to win a state championship. We got the blessing to get a full season, and we took advantage of it.”

That dream was in jeopardy with 7½ minutes remaining after Montiel made his only mistake of the night, trying to lob a screen pass over 6-foot-5 lineman Tanner Relling, who snatched the ball out of the air to set up Marist Catholic at the Pirates 29.

Five plays later, the Spartans faced fourth-and-3 from the 4, needing a touchdown and two-point conversion to erase a 42-34 deficit. They called upon their senior leader, Lucas Tuski, who powered over the left side of the line and into a pile of Pirates defenders, with sophomore Canyon Niblett delivering the final hit as Tuski reached the ball toward the goal line.

“To be completely honest, I was only there for the last 20 percent of that tackle,” Niblett said. “My teammates brought him down, but he’s about to put the ball out, and I stopped him. But that tackle was not only mine — we all made that stop.”

The linesman spotted the ball, and the referee called for the chains to be brought on the field.

“I feel like there’ll be a little bit of bias on either side you ask,” Tuski said. “But I felt like I was across that line.”

“I thought it was a first down,” he said.

The chains stretched taut, and the referee took a look, then got down for an even closer look before rising and pointing first down in Marshfield’s direction.

“It was about a centimeter away,” Niblett said. “It was so close, it was almost too close to tell. They could have given them the first down, to be honest. That was really scary.”

Still, the Spartans had Marshfield pinned deep. A three-and-out would have left plenty of time for them to take another shot at continuing their trend of second-half heroics that propelled them past Cascade and Estacada and to their first final since 2012.

Instead, Montiel restarted an offense that had stalled since putting up more than 400 yards and scoring 42 points in the first half. He connected on back-to-back passes to Maddux Mateski to give the Pirates some breathing room, and methodically he worked them down the field, using 14 plays and nearly six minutes of the clock to drain the life out of Marist Catholic.

“It was everything you dream about, a game ending like that,” Lemmons said. “It’s just a testimony to the character and grit of these young men and just absolutely awesome that they finished the game that way.”

Lemmons was the star of the Pirates’ previous state championship, making two interceptions, leading the team in tackles and scoring four touchdowns in being named MVP of the 36-21 victory over Ashland in 1992.

Four years ago, he returned to the Coos Bay school and immediately led the Pirates to the 2017 final, losing 48-14 to Cottage Grove. It took four more years — and a senior class headed by Montiel (whose 7,340 passing yards rank 15th on the state’s all-time list), all-state linebacker Ezra Waterman (seven tackles, sack, interception), and two-way standout DJ Daughtery (10 catches for 151 yards and a touchdown) — to get back to the final and end a 29-year drought and bring home a fifth state championship.

“It took me a long time, being a player and winning it in ’92, to realize how special it is,” Lemmons said. “It’s not easy to get here, and once you get here, it’s not easy to win it, so this is a dream come true, and I’ve been so blessed. This team has big hearts and strong minds, and you’re going to see great things from these kids.”

For 24 minutes, it looked as if Marshfield (15-0) wouldn’t need any last-minute heroics. Montiel threw for 350 yards and five touchdowns in the first half — three to senior Mason Pederson, who caught a career-high nine passes for a 4A championship game record 203 yards.

Their third scoring connection put the Pirates up 42-20 with 1:18 before halftime, but after an exchange of punts, the Spartans (10-3) got one final play when a penalty gave them an untimed down. They took advantage as Ryan Cary caught a tipped ball while streaking across the goal line.

“Our team all year has fed off big plays and energy and momentum,” said Tuski, who ran for 160 yards and a touchdown. “That was a nice way to swing the momentum, and we thought, yeah, we have this in our favor now. But it didn’t turn out the way we wanted it to.

“I’ve got to give props to all the guys on the other side, because they were the better team tonight. Both teams played a hell of a good game, and there was a lot of fight on both sides. I couldn’t wish for my senior year to end any other way.”

Fifty yards away, where it seemed as if the entire South Coast had poured onto the Herald White Stadium turf, the Pirates’ 17 seniors gathered for one final group photo as the celebration lasted well into the foggy night.

“I’m just so glad,” Pederson said. “We ended the season how we wanted to, checking everything off our checklist and just bringing home the blue trophy. I couldn’t have ended my career any better.”